Across most of campus, throwing trash away is easier than recycling. Ayodeji Oluwalana plans to flip that script, making recycling the default as part of a new initiative aimed at eventually preventing nearly all of Iowa State's waste from heading toward a landfill. Soon, for instance, that may mean a recycling bin will be the only disposal option in classrooms and at office desks.

Oluwalana is the first full-time recycling coordinator for facilities planning and management (FPM), a job he began in June. He has spent the summer assessing campus recycling efforts and meeting with key staff, such as custodial teams. His verdict? 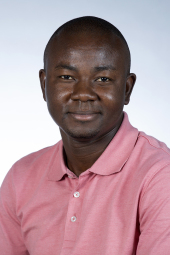 Starting this fall, ISU recycling will shift from survival to expansion."What I've seen so far, and from what folks have told me, I think recycling at ISU has been in survival mode," he said.

The goal is to be a zero-waste campus by 2025, Oluwalana said. That wouldn't mean Iowa State creates no trash. The university would be zero-waste if it established all possible means to keep refuse out of the garbage stream. While it's not realistic to divert everything, 90 percent is possible, Oluwalana said.

To work toward that, Oluwalana will be conducting a yearlong pilot project in a handful of high-traffic buildings beginning this fall -- the Gerdin Building for sure, with others yet to be identified. He'll test several tactics, including an increase in recycling bins, more visual and coordinated messaging on bins, signs encouraging recycling and classrooms without trash cans.

Boosting recycling was the goal in hiring a full-time coordinator, FPM facilities services director Bob Currie said. While blue recycling bins, which switched to no-sort mixed-stream in 2015, have been a familiar sight at faculty and staff desks for decades, students especially have limited options, Currie said.

Still, employees will play a role in recycling's resurgence. FPM's General Services Building will serve as a guinea pig this school year for taking trash cans away from desks, freeing up custodial staff to pick up recyclable materials from desk bins instead of trash. There will be centralized trash containers available for refuse bound for the city's Resource Recovery System, which burns what garbage it can as power plant fuel before sending the rest to a landfill.

Oluwalana will use feedback from the pilot projects -- and meetings with stakeholders over the next year -- to fine-tune uniform signs and designs for campus recycling receptacles.

"Anybody should be able to picture the materials that go into those bins," he said.

Coordinated messaging could help reduce contamination in recycling bins, which can cost the university extra fees charged by its recycling hauler, he said. Part of that coordination will be an interactive and informational website for the recycling program.

After an initial focus on indoor recycling, Oluwalana plans to tackle the availability outdoors, as well. There are just a few recycling spots along campus paths, he said.

The university's waste-reduction efforts will extend beyond better bins and more strategic communication, though.

Oluwalana hopes to streamline and strengthen the contracts and procurement that impact recycling. Consolidating waste management contracts for all university units and requiring the vendor to track how much material is removed is a key step toward determining how much refuse is being recycled, he said.

Part of Oluwalana's time will be devoted to coordinating FPM services for campus events, including those organized by student groups. This year, he'll encourage strategies to decrease waste at events by offering recycling and limiting single-use items such as disposable silverware. By the 2019-20 school year, the recommendations likely will become mandates for event authorization, he said.

Instilling recycling and waste-lessening habits in students, faculty and staff will take a long-term, cooperative effort, Oluwalana said. He plans to partner with sustainability director Merry Rankin and her Live Green team of student interns, for example. But ramping up recycling at Iowa State will require buy-in across campus, he said.

"It's a systemic approach. It's not just one entity," he said. "Once people have a sense of ownership, I think it will be a success."