Quick to point out that the proposed service delivery models haven't been approved, Cain and Darr emphasized that change is necessary. How the university does finance and HR work will change when the Workday software system goes live July 1, 2019.

"Every single person that touches finance and touches HR will be impacted," Cain said.

The proposed models call for more specialization and centralized management. Most human resources and financial services work, some of which is now done by employees who have a variety of other responsibilities, would shift to new staff positions devoted to more defined tasks and supervised by managers who report to top-level finance or HR leaders.

Cain and Darr provided a closer look at the responsibilities the positions in their structures might have.

Cain summarized the three levels of finance responsibilities in the proposed model.

"The strategic things for the units will all stay in the units," Cain said. "On the specialist teams are the things we're trying to pull out that add value to the [expert] teams. Our hope is with these teams -- highly functioning individuals -- we can continually improve our service, our punctuality and our timeliness on everything we do."

She said the finance teams would vary in size and composition, based on the needs of the units they serve. For example, some units have no grant funding, while other units may need multiple specialists with grants expertise.

Darr outlined four levels of roles and responsibilities in the proposed HR model.

"The HR coordinator role is that person who is helping that local unit -- day in and day out -- to make decisions," Darr said.

The Institutional Effectiveness Leadership Team that developed the proposed models is expected to submit its final recommendation to President Wendy Wintersteen in November. Pending her decision, the new year could kick off with a flurry of activity.

"The bulk of the work likely will come after the holidays," Darr said.

Cain and Darr said the top HR and finance positions would be filled first, allowing those leaders to help assemble their teams. Cain said they are working with the equal opportunity office to map out an appropriate hiring process for moving current personnel into new positions.

As an example, she said five such teams could answer to a financial services manager, who balances work among the teams.

Cain said the goal is to have merit staff and professional and scientific staff on the finance red teams.

Darr said an HR coordinator will handle "lifecycle" transactions such as job changes, hires, resignations and retirements. She said that includes problem solving and helping employees understand the tools available to them to solve issues. The number of HR coordinators needed to support a unit is not decided yet.

"I don't believe these are routine tasks. We employ humans and they give us surprises," she said.

In response to a question about soft/grant funding for jobs, Darr said the expectation is that functional specialist positions will be continuous (though it's not yet decided). The funding model for the specialist teams isn’t set yet, either.

Employees who don't want to be specialists

Department-level leaders will work with employees who had HR and/or finance responsibilities to redefine their positions, which may involve taking on new duties or those once handled by co-workers who sought specialist positions. Darr said it will be important to avoid demoting employees unless they choose that.

Where/how to find the new jobs

Cain said the process is being defined now, with assistance from the equal opportunity staff. Due to the high volume, it won't involve the "normal application process." Employees need a pathway to express interest in a new job or opt to stay locally. Cain said the goal is a streamlined process that isn't cumbersome to employees.

Darr said there will be lots of communication about when the jobs are known, application deadlines, etc. "You shouldn't be surprised when those jobs are available," she said.

What if no one wants to fill the functional specialist jobs?

Darr's advice is to learn more about the new jobs as they get defined and ask questions about what will happen to current positions. Jobs at the local level will change, too. Each person needs to evaluate what interests them, she said.

Darr said she believes employees will apply to fill the roles in the models. She has heard enthusiasm for "doing things right."

If no one moves, Darr said she'd have to conclude, "we didn't listen, we didn't design it right."

The option at that time is to "retool." Doing nothing is not an option because the president is committed to the change, Darr said.

Timeline for when units and specialist jobs are defined

Darr emphasized this timeline is "in pencil":

If the president's decision comes in November, work commences on defining jobs (some preliminary work has begun). In late November/early December, Darr said she hopes to talk very specifically about jobs. "We'll meet with all of you and answer your questions," she said.

Decisions about units is a separate process.

The highest-level positions in each model would be posted first so supervisory roles are filled. January and February is when most people would be assigned positions. Darr's goal is to have people slotted into jobs and know where they're going by the end of March. This would align with Workday training.

Cain said they've talked about a job fair or a "speed dating" type of format where people can learn quickly about a variety of jobs. The goal, she said, is to get people comfortable with what the new jobs are so they can make the best decisions for themselves.

Darr noted that "unpacking" what tasks and responsibilities stay local also will take time. Realistically, that will ebb and flow over the next year.

Darr called this the "messy" period when employees shift to new positions and train for them while still performing their current jobs. She said this period is one of her concerns, and she said "we have to figure out" how to support employees dealing with a lot of change.

Impact of the service delivery models on compensation

Compensation is individual, Darr noted, but she spoke more generally about transitioning not only to new service delivery models, but a new P&S classification and compensation system, scheduled to roll out in September 2019.

"We know inequities in compensation exist now on campus. There's a wide variety of compensation practices," she said. "July 1 is a milestone, not a destination. Everything won't be settled by then."

She said no P&S employee knows where he or she will sit in the salary ranges in the new system, and the service delivery models won't solve that question.

Darr said the new classification system isn't completed yet. Job families are still being created and defined. From a practical perspective, it may be too big a leap to put the new jobs in the new system initially.

Darr pledged it will be a very collaborative process, including input from senior leaders and the president.

Cain said those discussions will need to assess the complexity and the volume of things that a unit does -- for example, do employees do lots of international travel or is there a lot of grant funding. She gave this example:

"A very large unit could have 25 people on a red [specialist] team, but they might not be sitting in the same location. They will work as a team, but I don't see a huge pool of people in one location. We're trying to get those teams embedded in the units so they have a clear understanding of the needs so they can be proactive in the problem solving that needs to happen, and they can be there as experts, a resource for the unit." 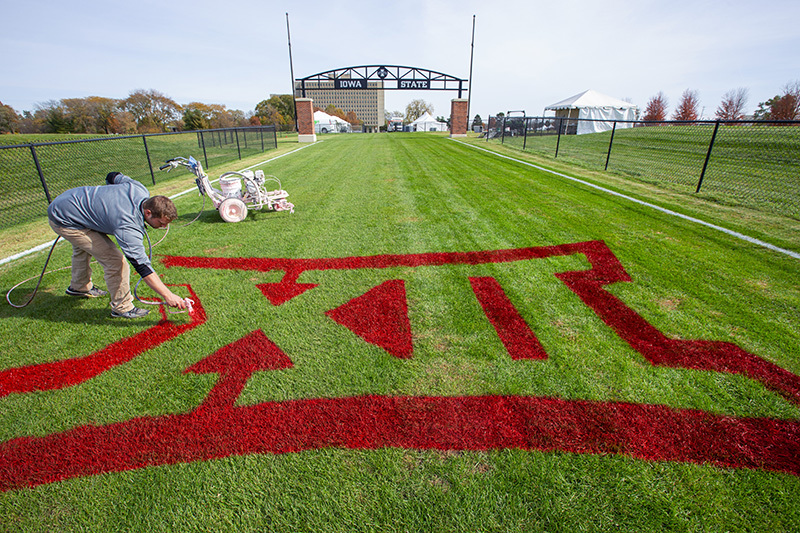 The men's and women's cross country championships return to Ames for the first time in 10 years.