Summer projects happening near you 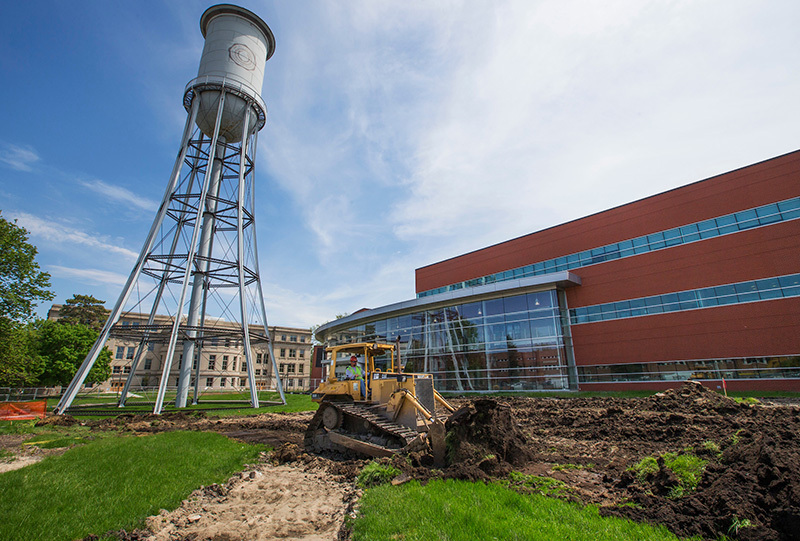 A bulldozer tears up the turf earlier this week at the construction site for the future Student Innovation Center. Following demolition of the Nuclear Engineering Laboratory and the southeast portion of Sweeney Hall this month, construction will begin on the 140,000-square-foot facility, with completion scheduled for spring 2020. Photo by Christopher Gannon.

With spring commencement in the review mirror, work begins in earnest on lots of seasonal construction projects. There are dozens scheduled, but Inside offers a look at a few with the potential to impact the most people on campus.

More plaza area at the Hub

The pavers and built-in planter southeast of the Hub will be removed and the area redone to coordinate with the patio west of the Hub. The project will add outdoor tables and seating. Work will begin yet this month and wrap up in early July.

Beginning later this month and continuing through the fall, landscape work in the former S-3 parking lot south of Jack Trice Stadium will create a reflective pool and fountain, pathways and berms. New signage for Reiman Gardens at the entrance off of University Boulevard also will be installed. Next spring, the green space will be completed with perennial and grasses plantings. This is the final piece of the 2015 stadium expansion.

A rooftop addition, combined with a renovation of the College of Veterinary Medicine's current café, will create a café and commons/gathering area roughly twice the size of the existing space. Work is scheduled to begin in June and wrap up in August 2018. Beginning May 15, ISU Dining will provide coffee and food service from a temporary location down the hall, 2272 Vet Med.

A three-month project at the intersection will replace the traffic signals, sidewalk corners and road pavement. Work was set to begin this week and continue, in phases, to mid-August. The intersection will stay in use all summer, but traffic will be reduced to a single lane in each direction, so congestion is likely during peak hours.

Two utility projects to increase the capacity at the north chilled water plant (located on Kooser Drive, south of the railroad tracks) will disrupt traffic in the north part of campus in phases. The first, which will add two underground chilled water mains between the north plant and the Pammel Drive/WOI Road intersection, will affect the parking lots and roads in that area. WOI Road, Kooser Drive and sections of lots 27, 28 and 29 will close in phases; but buildings will remain accessible. The project begins this month and continues into October.

The second, which will extend an underground electrical duct and feeder line from the electrical substation north of the power plant to the north chilled water plant, will close University Boulevard (east of Wallace Road), two lanes at a time, for about a week each. In late July, it also will close all four lanes of Stange Road (between Frederiksen Court and Pammel Drive) for about two weeks. Dates for the lane and road closures aren't scheduled yet. A pedestrian walkway will remain open during the Stange Road closure.

Iowa State's carillon will go silent this summer while repair work is completed on the campanile structure. The work includes replacing the waterproof membrane within the bell chamber, replacing the roof access hatch and installing new wire guides that connect the 50 bells to the carillon keyboard. It is scheduled to begin May 22 and conclude in mid-August.

Phased projects over two summers (2017 and 2018) will replace the windows in the Armory, Hamilton Hall and the Wallace and Wilson residence halls.

The multiphased project to widen the sidewalk on the north side of Osborn Drive continues this summer near Gilman Hall (from the west edge of the front steps west for about 200 feet). This project also will replace the CyRide bus stopon the north side of Osborn (a temporary bus stop will be east of the Gilman steps). The work begins May 11 and continues for about four weeks. The sidewalk between Physics and Gilman halls will be widened next summer.

Sidewalk repairs this summer (now through Aug. 5) will be focused on the east side of campus, in the neighborhood bordered by College Creek, Farm House Lane, Pammel Drive and Beach Road. Crews will replace broken sidewalk panels and fix uplifted panels that pose a tripping threat.

Work to redo lot 37 (between Science II and Lagomarcino halls) and lot 59C (south of Helser) began this week and will continue into mid-June. When those lots are completed, lot 59F (west of Helser) will be redone, finishing prior to Aug. 1.

ISU employees, retirees and spouses who died during the past year will be remembered at this annual event.