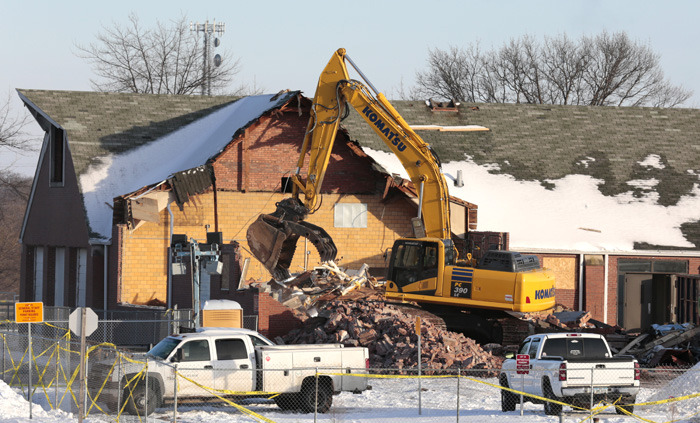 Following weeks of asbestos removal and other prep work, a demolition crew began the task of taking down the 90-year-old Industrial Education II on the north side of campus earlier this week. The site is the future home of a five-story, $50 million biosciences teaching and research facility.

Each finalist will interview on campus over two days and participate in a one-hour public forum in the Memorial Union. At each forum, the candidate will make a brief presentation, then answer questions from the audience. The public forum schedule is:

They encouraged the university community to take advantage of the opportunity to hear from the candidates, ask questions and provide feedback to the search committee. An online feedback form will be available on the search site site later this month.

Lori Reesor has served as North Dakota's vice president for student affairs since 2011. She also served as associate vice provost for student success at the University of Kansas, Lawrence; associate dean, assistant dean and adjunct instructor in the School of Education at the University of Missouri, Kansas City; and dean of students at Wichita State University, Kansas. In a previous stint at Kansas, she served as associate director of admissions, acting director and assistant director of new student orientation, assistant to the dean of educational services and residence hall director. She also served as a financial aid counselor, academic adviser and women's center program assistant at Iowa State.

Reesor earned a bachelor's degree in business management from the University of Wisconsin, Whitewater; a master's in higher education from Iowa State; and a doctorate in educational policy and leadership from Kansas.

Al Thompson has served as vice chancellor for student affairs at UW-Stevens Point since 2011 and chief diversity officer since 2012. Prior to that, he served as associate vice president for student affairs and dean of student life at Eastern Washington University, Cheney. He was assistant to the chancellor for affirmative action and diversity at the University of Wisconsin, La Crosse, where he also developed and taught graduate courses in education professional development and organizational theory. At the University of Wisconsin, Platteville, he served as assistant to the chancellor for minority affairs, director of multicultural services and director of the ethnic studies program. He also was coordinator of minority student programs and residence hall director at Luther College, Decorah.

Thompson earned a bachelor's degree in psychology (1981) and master's in counselor education and student development (1985) from the University of Iowa; and a doctor of education (2004) from Saint Mary's University, Minneapolis.

More information on the search site

Candidates' curriculum vitae are available on the senior vice president for student affairs search site. An online form will be available to provide feedback about the finalists.

The senior vice president for student affairs will succeed Tom Hill, who retired after serving as VP since 1997. 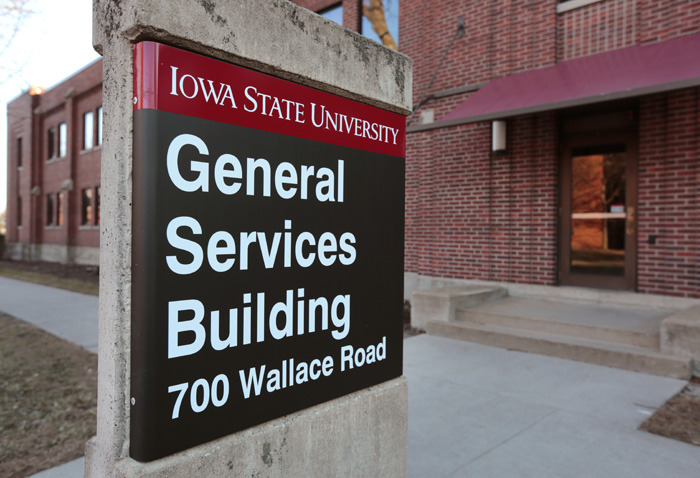 The General Services Building's outdoor sign is the first to feature its street address. Photo by Christopher Gannon.

Street addresses for all campus buildings, first shared with the university community in October, went into use on Jan. 1. Implementation of several components of the project -- such as updating building signs and the online directory or reordering stationery -- will continue for several months.

In addition to academic and residence buildings, the project assigned a street address to all parking lots, storage facilities, utility sites and outdoor recreation and athletics areas. Places such as the campanile and Lake LaVerne even have their own addresses.

In the meantime, full street addresses are available now in two online locations:

Department coordinators who maintain the departmental section of the online directory have responsibility for updating those directory entries with street addresses. Departments and units also are responsible for adding street addresses to contact information in the websites they maintain.

Printing services has revised its templates to add a line for a street address. Customer service coordinator Lana Voga said street addresses automatically are added to printed products when orders are placed.

The new business card templates, for example, now feature either seven or eight lines for text, depending on which university nameplate is selected (with or without the "of science and technology" line). Revised templates for letterhead and a business envelope also are available.

"We're encouraging employees to use up their current business cards and letterhead," Voga said, not only because supplies shouldn't be wasted, but because it will help printing services process orders more efficiently.

The brown panels on outdoor columnar building signs will be removed and refinished in a phased process that begins in the center of campus and proceeds outward, finishing with the Frederiksen Court student apartments. That process has begun and should wrap up by the end of the semester. A refinished sign will include the red and white university nameplate, building name and its street address. Due to space restrictions, unit names will not be included on building signs.

FPM web technologist John Hoffman, who also is a regional lead for Google Maps, has added campus street addresses to the ISU building features on Google Maps. Viewers can search either by building name or address, as well as use Google's "Directions' feature for walking or driving on campus.

Mail from off campus

Individuals and units are responsible for alerting their own vendors, clients and associates to their updated address. For example, when it's time to renew a journal subscription or professional membership, include your building street address in your contact information.

Landscape design services project manager Chris Strawhacker, who's overseeing the project for FPM, said a primary reason for street addresses is to integrate campus with the local emergency response system and shorten response times for emergency personnel. Street addresses also should help visitors with wayfinding and simplify the task for package delivery and ride services.

Street address system for campus buildings is nearly ready, May 7, 2015

With a new year comes a new look for an existing policy. As of Jan. 1, electronic smoking devices are included in Iowa State's smoke-free campus policy.

A 2008 revision to the policy put ISU in accord with the state's Smokefree Air Act (Iowa Code 142D). This latest revision adds electronic devices "containing or delivering nicotine" that "simulate smoking through inhalation of vapor or aerosol." That includes devices commonly known as e-cigarettes or vape pens.

The policy applies to anyone on campus -- employees, students and visitors -- and covers all vehicles, buildings, property and grounds that are owned, leased or operated by Iowa State.

Two policies intended to go into effect on Jan. 1 aren't quite ready, including:

"I am pleased that Mohamed will continue to build on this operation's success," said acting senior vice president for student affairs Tom Hill. "I know that the staff and the division are looking forward to his leadership and the tremendous experience of successful dining operations that he brings with him."

Hill emphasized the importance of dining for the university. "ISU Dining is a crucial component to student life -- not only for its diversity and quality of services and programs, but also because we employ over 1,700 students. That's huge when it comes to employment opportunities at Iowa State."

Hill has served as the interim director of ISU Dining since Jan. 2, 2015, when former director Nancy Keller announced her retirement.

Recipients of the 2016 Advancing One Community Awards will be honored Jan. 21 (3:30 p.m., Memorial Union, Sun Room) during the Martin Luther King Jr. Legacy Convocation. All are invited to attend.

Since 2006, Iowa State has honored students, groups and faculty or staff members who demonstrate a commitment to King's principles and goals to create an inclusive multicultural community, and to reduce injustice and inequity at Iowa State. Winners receive a $500 stipend and a plaque. This year's recipients are:

Nominations for next year's Advancing One Community Award recipients will be accepted in the fall. More information about the awards, including eligibility requirements and past winners, is available online. 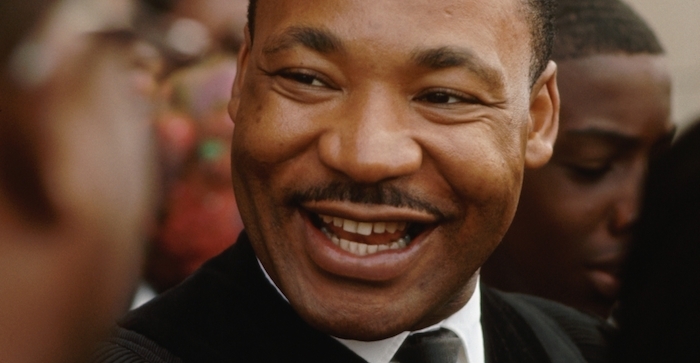 The legacy of Martin Luther King Jr. will be commemorated nationally on Jan. 18. Iowa State also is honoring King with several events throughout January, which are free and open to the public.

Long before the nation paused each January to honor Martin Luther King Jr.'s birthday and civil rights contributions, he spoke at Iowa State on Jan. 22, 1960, at the closing convocation of the Religion in Life Week program. According to an Ames Tribune article published the next day, approximately 1,500 people packed the Memorial Union's Great Hall to hear King's speech, "The Moral Challenges of a New Age." King also was scheduled to speak at a social sciences seminar prior to his Great Hall lecture, but a series of flight complications forced him to miss the engagement.