Exhibit features alumni in every state 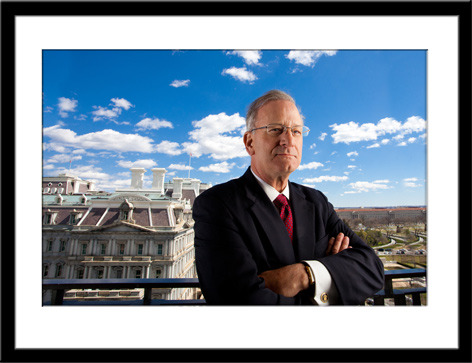 It was alumni outreach of epic proportions, an odyssey that would take VISIONS magazine editor Carole Gieseke and photographer Jim Heemstra on a two-year journey to every state in the nation. Their goal: To find, photograph and tell the stories of Iowa State alumni across the United States.

Learn more about the VISIONS Across America project and art exhibit.

Those stories are playing out now, in the pages of the recently released spring edition of VISIONS magazine and in a new exhibition at Brunnier Art Museum. Gieseke and Heemstra saw some breathtaking scenery on the trek across the states, but it was the 120-plus alumni they met who stole the show.

Their stories are as varied as their locales. There's the New Orleans resident who, six years after Katrina, still awaited electricity in her home. The Nevadan who circled the world two and a half times in his single-engine plane. The New York stargazer who attached to his house a two-story tower topped by a 16-foot domed observatory.

These alums and many others are featured in the "VISIONS Across America" exhibition, which opens at the Brunnier (295 Scheman Building) today and runs through Aug. 9. Among the 116 portraits in the exhibition are some pieces as wide as 8 feet.

Gieseke encouraged faculty, staff and students to visit the exhibit during the opening reception Friday, April 4 (5-8 p.m.). Gieseke, Heemstra and some of the alumni featured in the portraits will be on hand, and a brief program is scheduled for 6:30 p.m.

Gieseke noted that extra copies of the spring edition of VISIONS are available through the alumni association ($10 for members, $12 for others). Departmental rates are available for those who want to use the magazine for alumni or visitors; contact Gieseke, (cgieseke@iastate.edu, 4-6560).

A public forum on the state Board of Regents' efficiency review of the three public universities drew a crowd Tuesday. Some 150 members of the university community assembled in the Howe Hall auditorium and another 246 tuned to the forum's livestream to find out more about the review.

The Iowa State forum was the second in five days for the regents and Deloitte Consulting representatives, who are making stops at all three campuses to help launch the first phase of the regents Transparent, Inclusive Efficiency Review (TIER). Iowa's forum was March 31, and Northern Iowa's is April 7.

A few themes emerged during the 90-minute session at Iowa State. Regents and the consultants repeatedly stated that:

Following are forum highlights and responses to some of the questions posed during the Q&A session. Deloitte representatives promised to follow up on unanswered questions in an online FAQ that will be added to the ISU efficiency review site.

Opening the forum, President Steven Leath referenced renewed support from the state legislature in the past few years. One of the reasons, he said, is that "we've done a very good job with the money we've received from the state.

"The fact that we've done such a good job is the reason we're benefiting," he said. "But it also means we have a responsibility to continue to manage as efficiently and wisely as we can. We owe it to our students, to their parents, to the taxpayers of Iowa to be sure we operate as efficiently as possible going forward, not just in the past."

Deloitte Consulting, the firm conducting the review, has considerable experience in similar work with other universities, Leath said. "I'm pleased to join the regents and University of Iowa and Northern Iowa in this comprehensive review of our entire administrative and academic operations, and we're looking forward to working with the team from Deloitte."

Rastetter: The time is right

Board of regents president Bruce Rastetter said it's important to do a study now because one hasn't been done for 30 years, and the savings can be reinvested in the universities.

"We should do this study when, frankly, the state has dollars and isn't intending to ask for these dollars back," Rastetter said. "We have said very clearly -- and I continue to say -- that all savings found at each individual university will be reinvested at that university upon the recommendation of the president and the stakeholders at the university and the regents."

Regent Larry McKibben, who is chairing the review committee, said a key concern is student debt. Average debt at graduation for an Iowa State undergraduate student is $29,324, he said.

Echoing similar comments by Leath, Rastetter and the Deloitte consultants, McKibben asked members of the university to get involved in the review.

Deloitte team director Rick Ferraro and project manager Virginia Fraser outlined the first two phases of the review. A timeline has not been established for phase 3, which involves designing and launching improvements.

Phase 1 began approximately a week ago and will continue into May. It includes data collection in advance ("so we can use your time as wisely as possible") followed by hundreds of interviews. Consultants arrive on Iowa State's campus the week of April 14. They'll look to identify key strengths and challenges, strategic priorities and potential opportunities to improve service delivery and reduce costs.

During phase 2, consultants will sort through potential opportunities identified in phase 1 for improving services or reducing costs, and select some for in-depth, cost-benefit analyses. An implementation roadmap will be developed. Phase 2 is an estimated 11-week process. Since the phase overlaps summer, consultants said they'll adapt schedules to ensure engagement and involvement with faculty.

Question: What kind of data has Deloitte been collecting and who will consultants meet with on campus?

Question: What criteria might be used to determine an academic major should be cut due to duplication?

"Those criteria are partially going to be dependent on what you think," Ferraro said. "It's not predetermined. We don't have a set of criteria that we walk in the door and say, 'This is the only way to do it.' There are no preconceived notions. We need to interact to come to the right answer."

Rastetter emphasized that the board has no preconceived ideas on programs or program elimination. He said the regents would like to see a board-level policy on how it approves new programs and courses.

"When we approve 30 or 40 or 50 new courses and programs, one of the challenges is understanding whether there exists duplication between the three universities or if we're creating more duplication with precious dollars," Rastetter said.

He added that the board has asked Deloitte to come up with a policy and recommendation that helps the board make judgments on program proposals "so that we don’t create three look-alike universities going forward."

Question: Has Deloitte been involved in similar studies with other universities and if so, what were some outcomes?

The consultants pointed to studies in Virginia, California, Texas and Massachusetts.  Fraser said a common issue at universities is that they tend to develop organically over time, winding up with complex processes and policies and inconsistencies in how work gets done. Fixes often not only result in cost savings, but in freeing people's time so they're not caught in administrative tasks, she said.

"It's well known that universites are that way," Ferraro added. "The extreme example we find would be a university that has seven email systems or more." 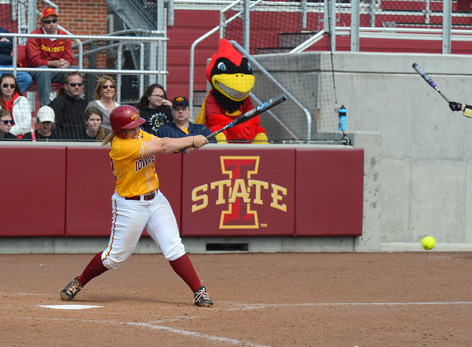 The ISU Alumni Association and the ISU Foundation will give the university's highest awards to 10 individuals and one business during the annual Distinguished Awards Celebration on Friday, April 11 (1:30 p.m., Sun Room, Memorial Union). All are invited to attend.

Awards are given each spring to alumni and friends of Iowa State. The 2014 award recipients are listed below:

Order of the Knoll Corporate and Foundation Award

Order of the Knoll Cardinal and Gold Award

Order of the Knoll Campanile Award

If you think Veishea is a weekend in April, think again. The preparation work on this spring's student-led celebration began more than a year ago; Veishea events kicked off in the last week with indoor and outdoor tournaments, the Stash the Trash community service day (March 29) and a preliminary round of the ISU student vocal competition, Cyclone Idol (March 31).

Here's a look at Veishea activities in the next week. Inside will preview the traditional weekend in next week's issue.

The Stars Over Veishea musical, Into the Woods, opens Friday, April 4, and includes six performances over two weekends at Fisher Theater.

Five of Iowa State's colleges will take turns hosting an outdoor lunch Monday through Friday, April 7-11, on the central campus lawn. Your lunch ticket is a $5 2014 Veishea button, available at the lunches or through April 4 on the ground floor of the Memorial Union (11 a.m.-2 p.m., outside the West Student Office Space). The daily menu is online.

Opera singer and music department artist in residence Simon Estes will speak at the Veishea opening ceremony Tuesday, April 8 (5 p.m., MU Sun Room). Estes also will serve as the grand marshal for the Veishea parade on Saturday morning. A 4 p.m. reception precedes the program. The 2014 Veishea co-chairs, Nick Morton and Karl Kerns, will open the program. Following Estes' talk, annual student organization awards, such as student leader of the year and adviser of the year, will be presented.

An estimated 100-plus middle school students from central Iowa will visit campus Wednesday, April 9, to live, for a few hours, the life of an Iowa State student. They'll attend several mini-classes, tour campus and enjoy lunch at the Veishea cookout.

One of the hallmarks of Veishea is plenty of quality – and free – entertainment. Our students will provide some of it during weeknight competitions in comedy, dance and singing. Here are the basics:

Actor Will Ferrell's Ron Burgandy film franchise, Anchorman and Anchorman 2, will be shown outdoors atop the MU parking ramp, also on Wednesday (9 p.m.). If there's rain, the films will be shown in the MU Sun Room.

Sections of parking lots 28 (general staff) and 29 (commuter students) north of the Communications, Molecular Biology and Metals Development buildings will be closed in phases to parking permit holders later next week in order to prepare for the Live@Veishea outdoor concerts Friday and Saturday nights. Veishea committee members will put flyers on cars in the affected lots beginning Monday.

Inside will take a closer look at Veishea Friday and Saturday events in the April 10 edition. Here's a quick outline of some Veishea favorites: 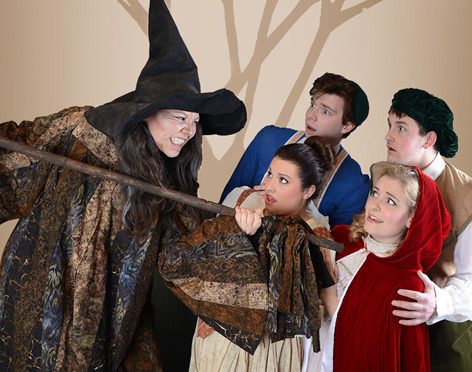 The annual Stars Over Veishea musical production opens its two-weekend run Friday at Fisher Theater. This year, the music and theater programs will perform the Tony Award-winning Broadway hit (and 2014 film release), Into the Woods.

The show blends popular fairy tales with story lines that are relevant today. Told by a narrator (senior Ethan Peterson) in storybook fashion, the tale follows the quest of a baker (junior Wes Ketcham) and his wife (senior Ashley Wiser) to break a curse that prevents them from having children.

Tickets for Into the Woods are available through Ticketmaster and the Iowa State Center ticket office. Show times are 7:30 p.m. on Fridays and Saturdays (April 4-5 and 11-12); 2 p.m. on Sundays (April 6 and 13).