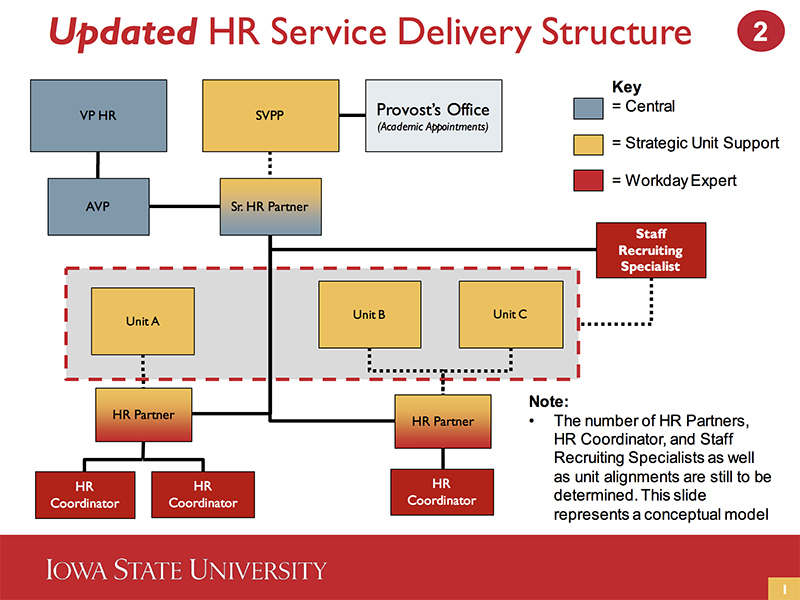 The university's top human resources official on Nov. 13 gave a more detailed look at an evolving plan to shift HR work to specialists next year, including a newly added role to support staff job searches and reduce the time it takes to fill open positions.

Kristi Darr, interim vice president for university human resources, also outlined a draft timeline for the transition to the proposed improved service delivery (ISD) models, which create teams of HR and finance specialists who are supervised by managers with experience in their areas. The Institutional Effectiveness Leadership Team super group, the committee developing the proposal, submitted a report on the recommended reorganization to President Wendy Wintersteen on Nov. 14, asking her to endorse its broad strokes.

Darr said she expects Wintersteen's response will be more focused on a path forward than a "yes or no" reaction.

"The president is looking to figure out what we can accomplish in the timeline we have. Is that a phased approach? What can we do to be successful and be thoughtful about the impact that has on staff as we do that?" Darr said.

The ISD proposal is driven largely by the move July 1, 2019, to Workday, a new platform for ISU business processes that requires specialized HR and finance expertise. But it also is a chance to make work in those areas more uniform, efficient and balanced, with better opportunities for development and advancement. In many offices, under the current structure, HR and finance duties are handled by the same staff member. Any staff member who handles either type of transaction will be affected by ISD, even if they don't fill a specialist position.

On Oct. 31, the Professional and Scientific Council, which represents the P&S staff who would be most directly impacted, passed a motion saying it needed more information before supporting a major restructuring. Darr's town hall -- and one with interim senior vice president for finance and university services Pam Cain set for Nov. 27 -- aimed to meet that need, relaying more granular details about the new positions and the transition.

As proposed in draft job descriptions released this week, ISD would create teams of HR coordinators to provide front-line guidance and support for units -- large groupings of colleges, departments and offices that Darr said she's close to determining.

New associate vice presidents in finance and HR would lead their respective customer service systems. Advertisements for those positions will post soon, as the new AVPs will help lead the transition next year, Darr said.

The size and alignment of units -- and the number of specialists and supervisors needed -- should be set before the end of the year, according to a draft timeline Darr shared at the town hall and pending approval of the plan by Wintersteen. An equal opportunity plan for ISD and a survey for staff seeking specialist roles also will be developed in November and December, she said. The survey will streamline hiring, which will be offered first to existing staff and consider interest, experience and qualifications, current alignment, and input from units and supervisors.

"If you want to come into the model, we're trying not to say, 'Fill out the application, do all these things,'" said Darr, adding that units will be defined before staff are asked to complete an interest survey.

"Essentially, what can you expect from a person doing work in this model? What's their turnaround time? What's the feedback mechanism?" Darr said.

The HR associate vice president and senior partner should be in place by February, Darr said. At the same time, HR officials will be drafting a training plan, identifying matches for coordinator positions and finalizing HR partner roles, she said. The aim is to finalize all new staff roles and departmental transition plans in March, Darr said. Beginning in April, the focus will be training for new roles and Workday while executing transition plans, she said.

Darr encouraged employees to continue providing feedback, noting that it was part of the reason another new position -- a staff recruiting specialist -- is now proposed in the ISD model.

The recruiting specialist would work closely with hiring managers but take on much of the work now spread among several employees, such as posting jobs, screening candidates and performing reference checks. Darr said managers would still have final say over their involvement in candidate screening, who is hired and hiring terms. Faculty searches would remain local, with support from HR partners, she said.

There are about 1,300 managers at Iowa State, and occasional hiring is "disheartening and stressful" for many, Darr said. Additional support should ease that stress and shorten the average time it takes to fill a staff job, which Darr said was 112 days after the approval of a position description.

"I've been here 10 years. For 10 years, this has been an issue," she said. "This is our opportunity to think about it differently." 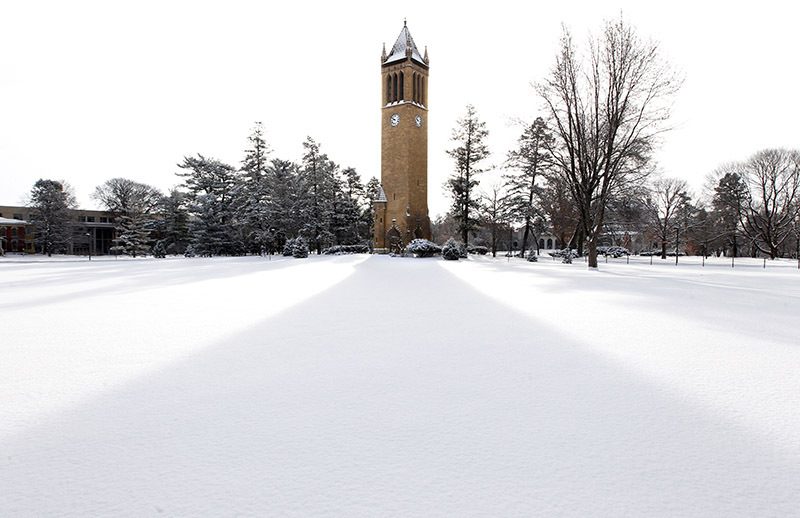 What to know when we get snow

Here's what employees should keep in mind when winter weather hits.