Beloved 'maidens' sculpture to be replicated 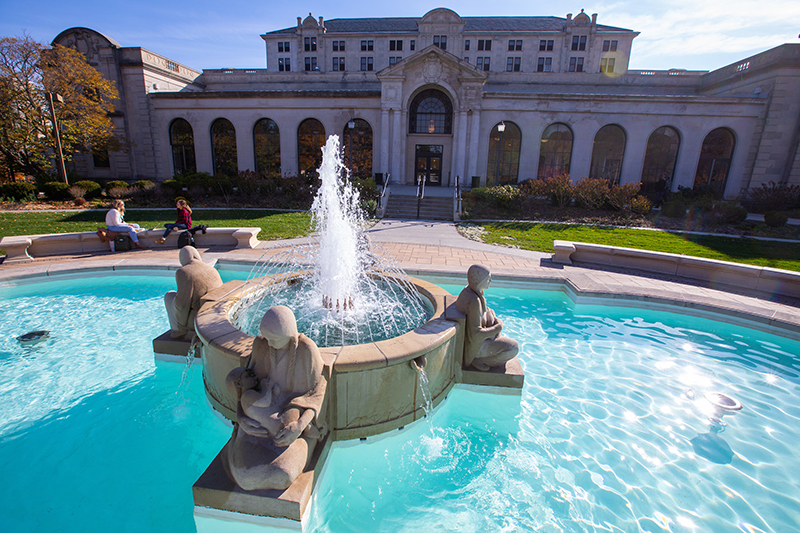 The 80-year-old Fountain of the Four Seasons sculpture will be disbanded this month, with the pieces used to guide the process of replicating Christian Petersen's iconic work. The original maidens will only be displayed indoors in the future. Photo by Christopher Gannon.

Eighty years of rain, ice and wind have eroded the limestone surfaces of the four maidens in Christian Petersen's Fountain of the Four Seasons sculpture, to the point that university museums will have replicas carved while it's still possible to recreate detail from the originals.

Next week's seasonal shutdown of the fountain on the Memorial Union front lawn will be more extensive than usual. The four maidens will be extracted from their concrete niches and, with the terra cotta fountain ring, crated and shipped to the Barre Sculpture Studios in Barre, Vermont, where a carving artist will replicate the sculpture and seating ledges on the pool wall. In the spring, facilities planning and management will oversee a project to remove and replace the concrete fountain pool, which no longer is structurally sound. While all the new components should be in place by early next fall, the water will start flowing again in April 2024.

Be ready for a color change. The new pool will be painted forest green, Petersen's choice for the pool in 1941.

The pool and fountain date back to 1937. Petersen's limestone maidens and terra cotta ring were added in 1941 after the university artist-in-residence proposed the concept to President Charles Friley in 1940.

University museums director Lynette Pohlman called the four Native American maidens "the most iconic works of art we have at Iowa State." 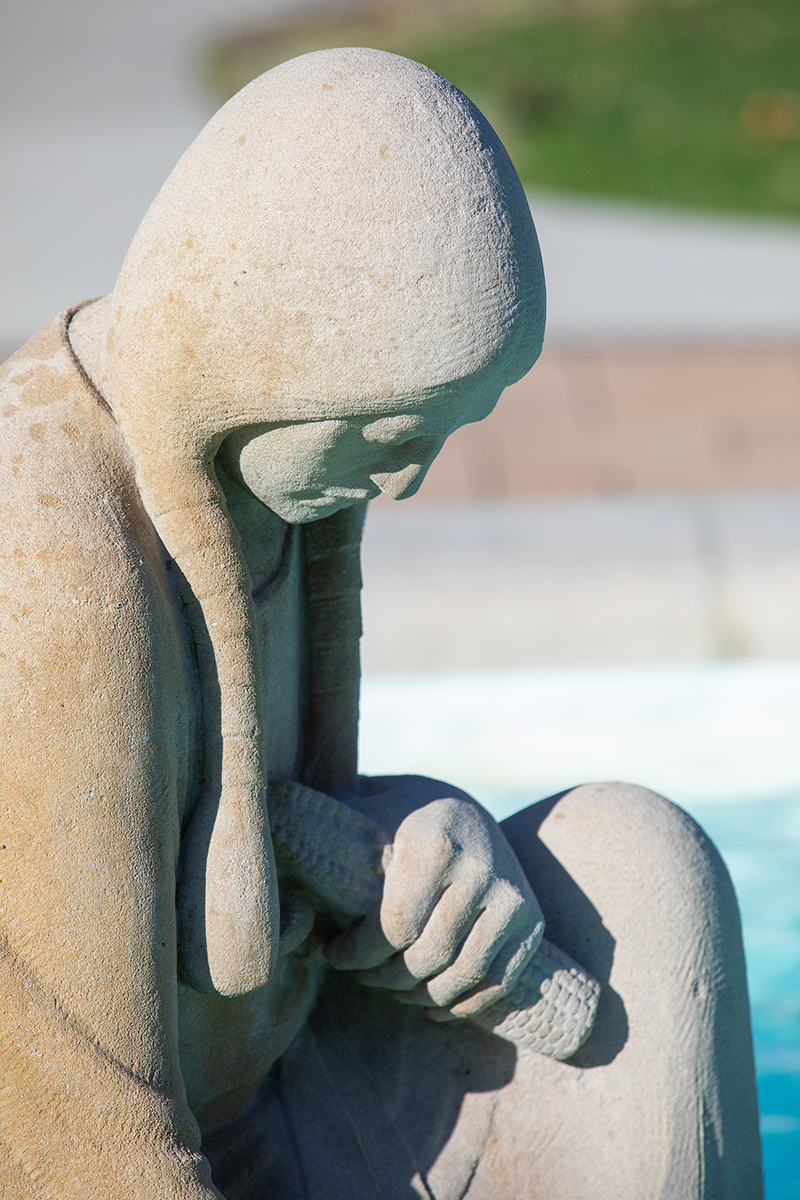 Iowa weather has worn away detail in the maidens' hair and clothing. Photo by Christopher Gannon.

Petersen used the four seasons to be a metaphor for family and the cycle of life. The maidens earned their beloved status, she said, "from many decades in a very public location and hundreds of thousands of filled hearts. They have multiple symbolic meanings to many, many people and colleges."

Which is why it's important to replicate them now, she added.

"I don't think any of us who are alive know what the originals looked like," Pohlman said. "Because they're made of (Indiana) Bedford limestone, they've faded. It literally washes away with water, so details in the sculpture are gone. You accept what it is now. For example, we've lost a lot of Petersen's tooling marks on the maidens, which provided the texture to their clothing and hair."

Pohlman said the replica carver will use the original sculptures as models, with Petersen's 1940 plaster models available as a second reference. And perhaps Iowa State's ace in the hole will be Connecticut-based sculptor and conservator Francis Miller, who has worked with Petersen works of art for university museums for more than 35 years.

"He, perhaps more than almost anyone else, knows Petersen's style," Pohlman said. "So, if you have to make distinctions in Petersen's nuances, I trust him to make those decisions." 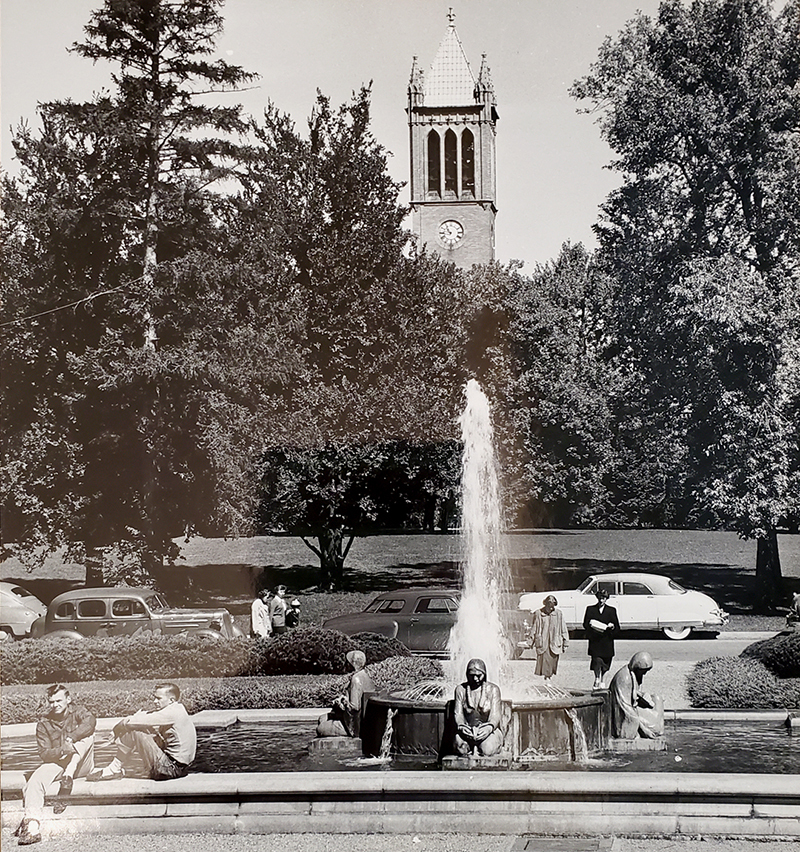 In 1958, the Fountain of the Four Seasons drew students to the MU front lawn, too. Photo courtesy of special collections and university archives.

Miller will not be with the carving artist every moment, but will visit regularly during the process, she said.

"The replicas will be Christian Petersen in his genius and his expression. Someone else's hand is doing it," Pohlman said.

She noted the process isn't far from the Renaissance tradition of artists working for a master in a studio. And while western culture ethics typically argue a copy is less valuable than its original, Pohlman said she'd rather live with a replica of the Fountain of the Four Seasons than not have it at all.

"In the end, we came back to the idea of a faithful replication, doing it as Petersen did it -- even if we have to do it again in 80 years," Pohlman said.

A future for Petersen's originals

Stay up to date

University museums staff is maintaining a website on the replication process.

When the original limestone sculptures come back to campus, they'll be used first in an exhibition in Morrill Hall's Christian Petersen Art Museum. Pohlman said they'll remain a part of the museums' permanent collection with an indoor-only restriction on them. She said a small team is studying options for the original sculpture, including: 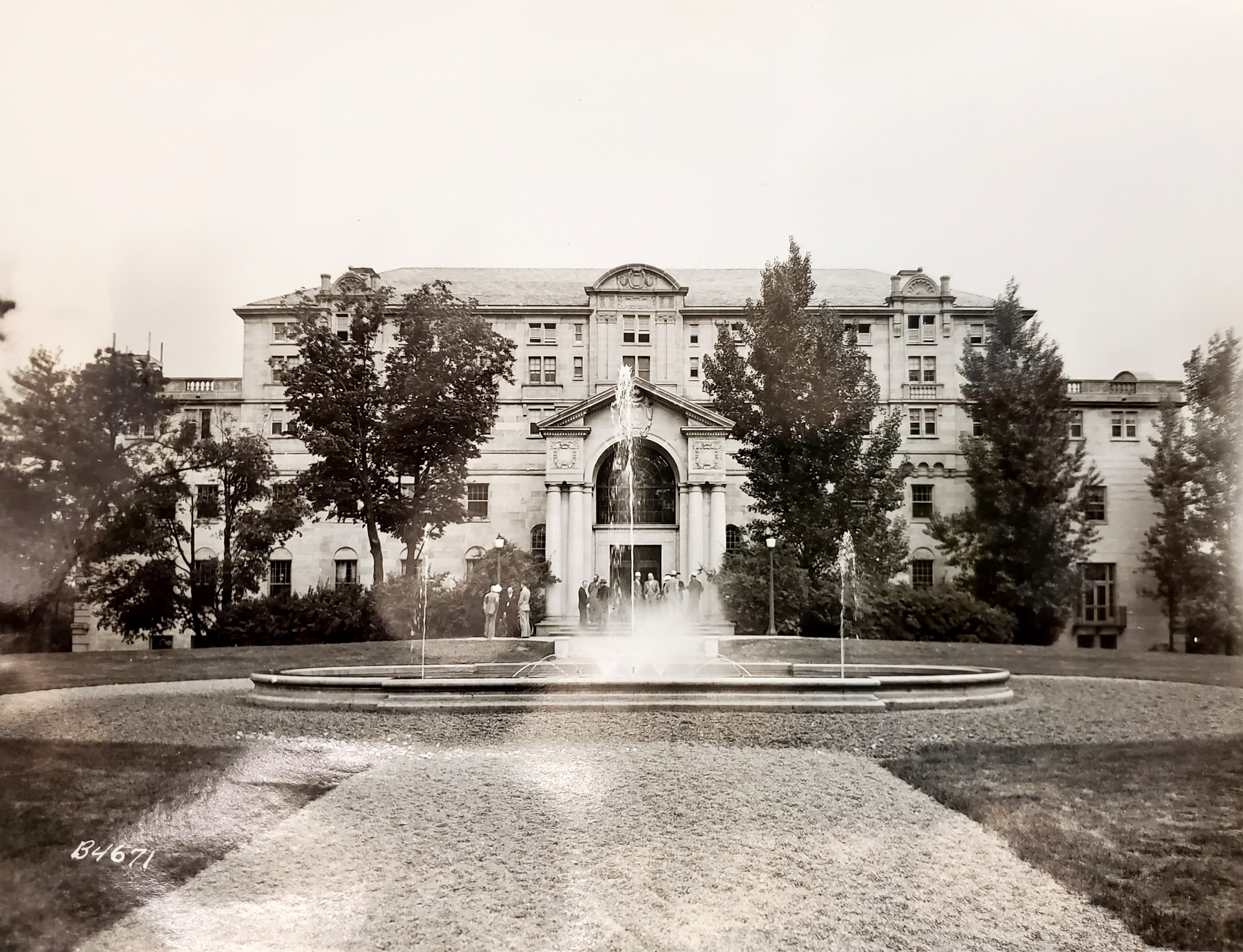 A fountain and pool was completed on the Memorial Union north lawn in 1937. Christian Petersen's sculpture would be added four years later. Photo courtesy of special collections and university archives. 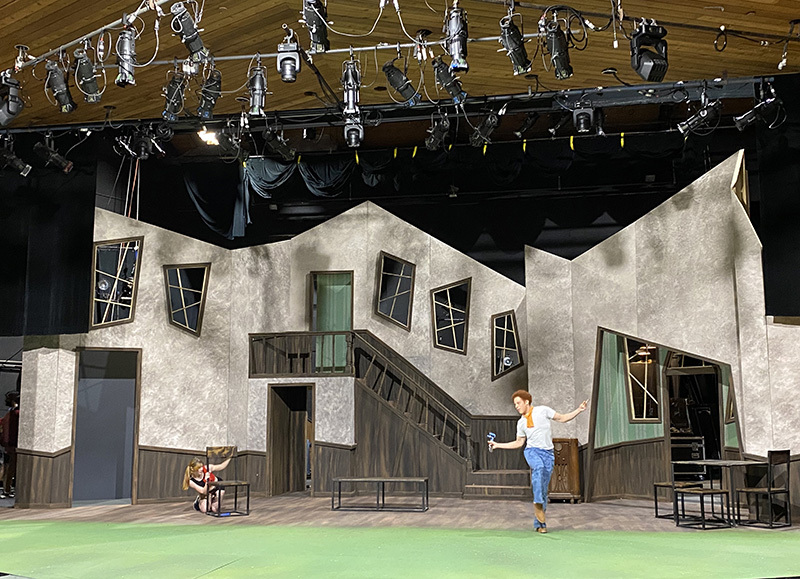