Helping current students doesn't stop when they leave the classroom. The pandemic has created many additional hurdles that could prevent some students from continuing their education.

That is where numerous colleges, offices, departments, faculty and staff have stepped in to assist through the Eligible to Enroll, Not Enrolled campaign.

"It creates an opportunity for students to connect with a resource within the university to help them navigate whatever is in the way of their registration," College of Liberal Arts and Sciences (LAS) associate dean Amy Slagell said. "We know interrupting time toward your degree can become a lifetime interruption, so it is important for students to have a connection to navigate their way back into the university."

The campaign began in the fall of 2016 and has been conducted during the fall and spring each year since. It provides a way to look at groups of students and determine how the university can better serve them. Making sure students are aware of available resources, and having the registrar's office and student financial aid be proactive is critical to the success of the campaign, senior associate registrar Shawna Saad said.

"This is a collaborative campaign across campus," she said.

The pandemic created a longer break between the fall and spring semesters this year, and the registrar's office, colleges and departments used it effectively.

"In December, the registrar's office provided student information to our college partners so they could do outreach and work with their departments and advisors," Saad said.

By January, colleges reported back to the registrar's office about the remaining students yet to enroll.The registrar sent a survey to students and guided them to the proper place based on their answers.

"Because of the extra time we had, at the end of January we took a final look at anyone still not enrolled and collaborated with colleges, the accounts receivable office and the office of student financial aid," Saad said. "As you can imagine, many of the students still on the list are not enrolling because they have a balance or are still working through their financial aid process."

That work -- including a phone call campaign to every student with a balance or hold on their account -- allowed some to return after receiving help.

The pandemic didn't result in a significantly higher number of students not enrolling in spring semester compared to spring 2020, Saad said.

At the start of the campaign Dec. 2, more than 5,000 students eligible to enroll for spring had yet to do so. After two months, the number had decreased to just over 1,000, Saad said.

"The fact that we remained at the same registration completion percentage despite the challenges faced this year could be considered a success," she said. "The number of personal outreaches to this group of students during a longer than normal break between semesters may have played a role in ensuring these students understood their options as they made decisions related to spring 2021 registration."

Before fall semester, each college conducted an intensive phone outreach effort to learn what was keeping students from enrolling.

One of the biggest efforts has been to work collaboratively with departments and colleges across campus to avoid overwhelming students while addressing their concerns as quickly and efficiently as possible.

"After we did a big push in June, we went back and looked, and it wasn't necessarily the calling or texting, but the emailing that was the most effective route," director of LAS student services Jennifer Owens said. "It was the persistence in the emailing. Our research showed it takes three emails to a student before they act on whatever you are sending them."

LAS student services specialist Mason Babcock compiles a list of eligible students who did not register as scheduled each week of registration. Advisors attempt to contact those students.

"In addition to the advisors, we asked departments to get involved this fall, and some departments had faculty calling students. We even utilized some student services staff to make calls as well," Owens said. "We also used Google Voice accounts to text with students."

An additional hurdle for freshmen enrolling from fall to spring was the fact most had never worked with the computer system.

"The way we did orientation last summer, very few freshmen made their own schedule," Owens said. "They were part of the process, of course, but they physically didn't enter the courses into the system. The advisor did that because we couldn't meet them in person."

The campaign offers colleges another connection point with students, especially during the challenging recent months.

"There are all kinds of resources students need and you don't know until you ask," Slagell said. "It is why this campaign is important because it is a check-in and part of the coordinated care the university tries to provide."

If a student must step away, Owens emphasizes they are welcome back when they are ready to return.

"Most students don't want to step out, it wasn't in their plan," she said. "It helps put them at ease."

The College of Engineering relies heavily on its academic advisors during the campaign because of the relationship built throughout a student's time on campus.

"The advisors are engaging with the student, and often multiple times throughout the semester," said Joel Johnson, College of Engineering director of student services. "The campaign has shown the critical role the academic advisor plays. They know the students well, and the students are communicating with them."

Each engineering department has an advising center with professional staff advisors, and a few departments use faculty to provide additional mentoring during the final two years. The advisors also communicate best methods to reach a student, and often know before the start of registration if there are issues or reasons a student plans to step away from the university.

Johnson said the campaign has been used long enough now to see the benefit it provides to the campus and students.

"I think it is a great partnership between the registrar, the student services offices and the advisors," he said. "It is that sharing of information and partnering together to identify students. This program has increased communication, collaboration and the understanding we are working for the common goal of having students reenroll." 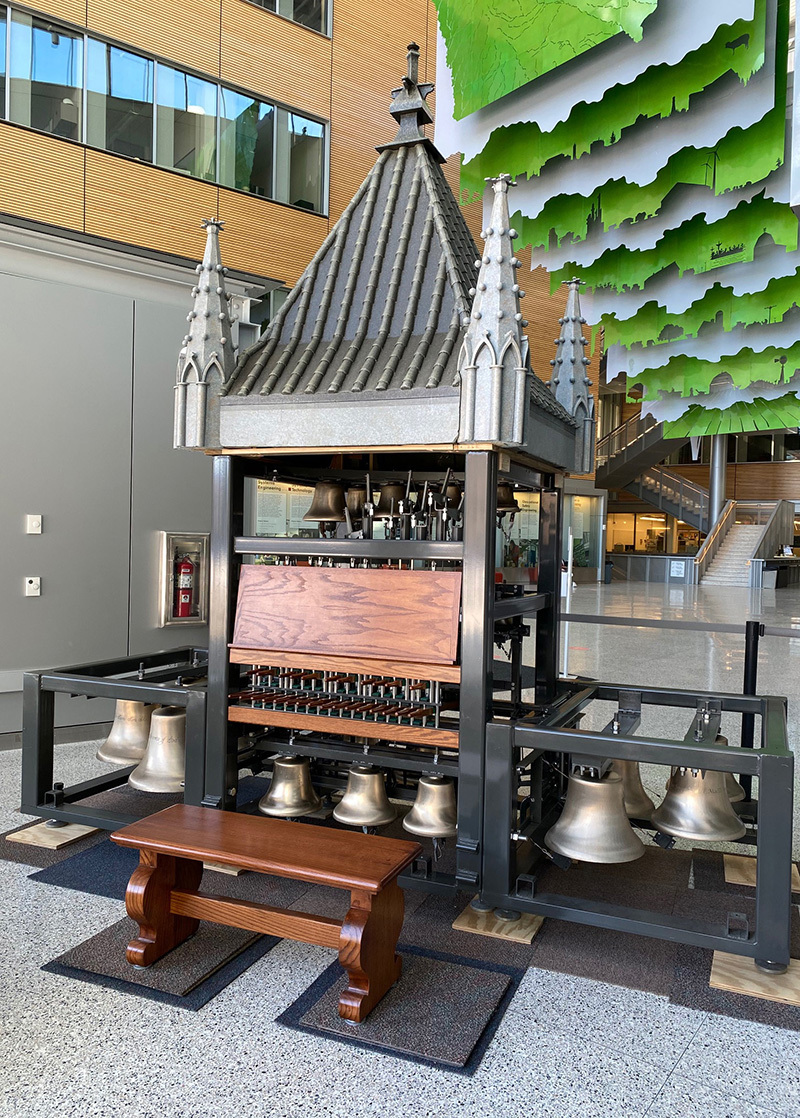 The Feb. 12 carillon concert can be viewed live in Sukup Hall or online.

The keynote presentation will focus on work cultures that are more caring and human-centered. Registration closes Feb. 22.