President Steven Leath announced the launch of the "Forever True, For Iowa State" campaign, a historic initiative to raise $1.1 billion for the university by June 30, 2020. The announcement was made at a Sept. 30 event in Hilton Coliseum.

The goal is the largest ever for a comprehensive ISU campaign, and will help achieve the university's vision to lead the world in advancing the land-grant ideals of putting science, technology and human creativity to work. The campaign goals include funding for research, faculty, student scholarships, new facilities and innovative programming, among others.

"One of Iowa State’s greatest resources is its family of loyal alumni and friends," Leath said. "This degree of loyalty is why the name of this campaign feels so appropriate. Our alumni remain forever true to this university -- as Iowa State remains forever true to the principles of innovation, diversity and accessibility on which it was founded."

With a name inspired by the Iowa State fight song, the campaign will rally support for scholarships, faculty support, facilities and programs. It will help ensure access to an exceptional education, advance Iowa State expertise in key areas that address global challenges, and enhance the university’s impact on the economy and quality of life in Iowa and around the world.

"I invite everyone whose lives have been touched by Iowa State to consider what it means to be Forever True to this university," said Jon Fleming, a 1975 Iowa State graduate and retired gastroenterologist from Ames, who serves as campaign chair. "With the help of our extended Iowa State family, I know we can make this the most transformative campaign in Cyclone history."

Off to a good start

Since the campaign began its quiet phase in 2012, more than $551 million has been raised and already is making a difference on Iowa State's campus.

The Moving Students Forward initiative, launched in 2012 by Leath, raised $204 million specifically for scholarships and other student support. More than 23,000 students have received support through the initiative. Also during the campaign to date, 35 new named faculty positions have been created. The Marston Hall renovation and the addition of the south end zone of Jack Trice Stadium were completed, in part, with funds contributed during the quiet phase.

"This goal stretches us, but there is so much to be gained in meeting it for our students' and for our children's futures," said Larissa Holtmyer Jones, president and CEO of the ISU Foundation. 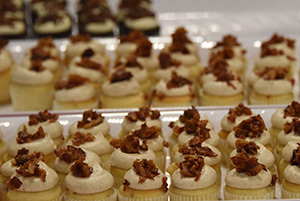 This annual -- and tasty -- event takes place on Saturday; there's still time to get tickets.