Pammel Drive to be resurfaced, striped as two-lane road this summer 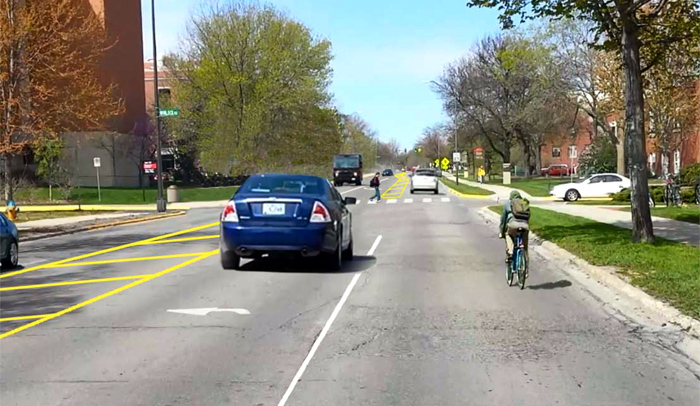 When Pammel Drive is resurfaced this summer, it will be striped as a two-lane road with center turn lanes and painted medians. Campus planners' intent is that the changes improve pedestrian safety and help Pammel Drive function more like a campus road.

"Pammel Drive has always been a campus road, but it functions as a city arterial," said project manager Angie Solberg, facilities planning and management. "With the development on the north edge of campus, we want to change the character of the road so it's not an east-west cut-through for the community. One goal is for Pammel Drive to be similar to other campus roads."

She noted that traffic counts on Pammel aren't enough to require four traffic lanes. She also confirmed that the street won't be narrower, just striped differently, and that other traffic variables will remain the same, including the posted speed limit and existing traffic lights and crosswalks. The CyRide Gold bus route will continue to use the eastbound lane of Pammel Drive. It passes through three times an hour only on days classes are held. The restriped road won't include a bicycle lane so bicyclists will keep their current options: ride in the road with traffic or on the dedicated north sidewalk.

Pedestrian safety is a focus of the new layout, Solberg said. Pedestrians should be safer in several ways:

This isn't the university's first use of striped (and thus flat) center medians. Several painting changes were made to Beach Road nearly a decade ago.

Years in the making

Pedestrian safety along the Pammel corridor has caused concern for many years. An Iowa State student died in 2005 when he stepped around a stopped bus and was hit by a moving vehicle in the adjacent lane. Solberg said this improvement plan has its roots in a 2009 Pammel Drive study that called for more extensive changes. Because of funding limitations, planners developed the striping alternative, for which Institutional Roads dollars were approved last fall.

Solberg's FPM team has involved others in planning for the changes, including public safety, traffic engineers and specialists from the Institute for Transportation. For more than a year, they've shared information with ISU's Transportation Advisory Council, department representatives and building supervisors along Pammel Drive.

The anticipated start for the project is in early June. Repairing the road, improving its drainage system and replacing curb between Stange Road and Bissell Drive will take the majority of the project's five-week window, Solberg said. Two lanes at a time will be closed, leaving one lane of traffic open in each direction. The final part of the project, laying two inches of asphalt and striping, will close Pammel Drive for an estimated three days. Solberg said the intent is to schedule most of the closure over a weekend when traffic is lighter.

Earlier this month, three video cameras and traffic tubes along Pammel Drive captured 24 hours of data on vehicle counts, vehicle speeds and pedestrian-vehicle interactions at marked crosswalks. That data capture will be repeated to assess the impact of this summer's changes.