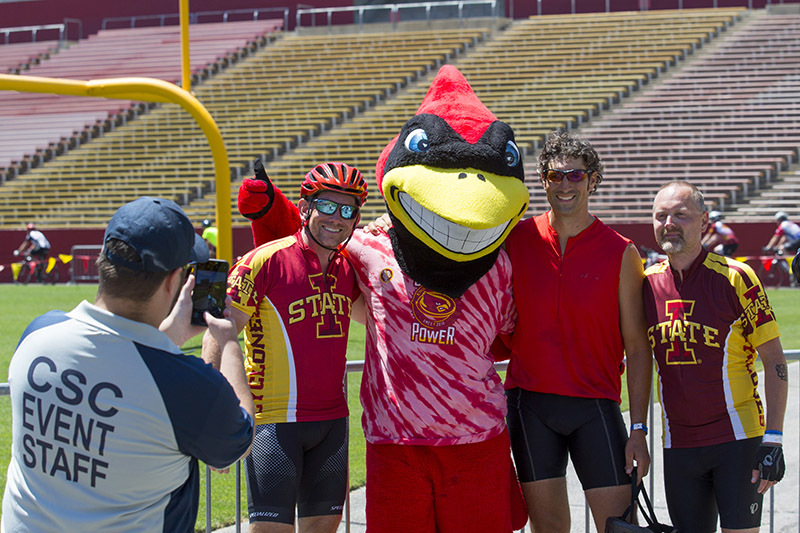 The Register's Great Annual Bicycle Ride Across Iowa rolled into Ames on Tuesday, giving riders a chance to bike through Jack Trice Stadium and snag a photo with Cy. Photos by Christopher Gannon.

Thanks to picture-perfect weather and a picture-perfect setting, the Cyclone Loop was a popular cap to the third day of the Register's Annual Great Bicycle Ride Across Iowa (RAGBRAI). Ames hosted the hordes of state-crossing cyclists for an overnight stop Tuesday, following a 62-mile day that gave riders the option of taking a spin around the field inside Jack Trice Stadium. Here are a few comments overheard in the loop.

Cyclists entered the stadium's field level through the tunnel in the northwest corner, the same spot where the football team emerges for games. There were lots of wide eyes and grins when bikers turned the corner at the end of the tunnel to catch their first glimpse inside the stadium. "Wow" was a common sentiment, in many forms:

Many of the riders came down the tunnel holding up their phones, shooting video of the inspiring entrance. "The best photo op of the week," one said as he approached. The first thing most riders did after arriving was stop to get a selfie. Not everyone got the message, though: "Hey, we need to get a picture here," one rider shouted to her companions speeding ahead toward midfield. "Hey! Hey!!! Picture!!!"

The unpainted turf was cordoned off, but most riders never get a chance to be so close to Jack Trice's playing surface. That prompted some remarks about the field:

"I've never actually been here before. I'm shocked that it's actually grass."

"It's shorter than I thought it would be. Is it always that short?"

Of course, there are jokers in every crowd:

"Is this where they play tennis?"

"Do we get a scholarship for this?"

Cyclone jerseys were a widespread choice on Tuesday, and impromptu cheers frequently broke out, along with the occasional fight song singalong. But get a bunch of Iowans together, and there's bound to be some Cy-Hawk ribbing. One rider had the Iowa fight song cued up on a portable speaker, not nearly as polite as the U of I fan who said: "Sorry, but go Hawks! Sorry!" A cyclist joked to his companion wearing a Hawkeye jersey: "Your legs will probably burn when you hit the field." Another wondered how Friday's overnight stop could possibly compare: "This is a very cool idea. Iowa City's going to have to step it up." 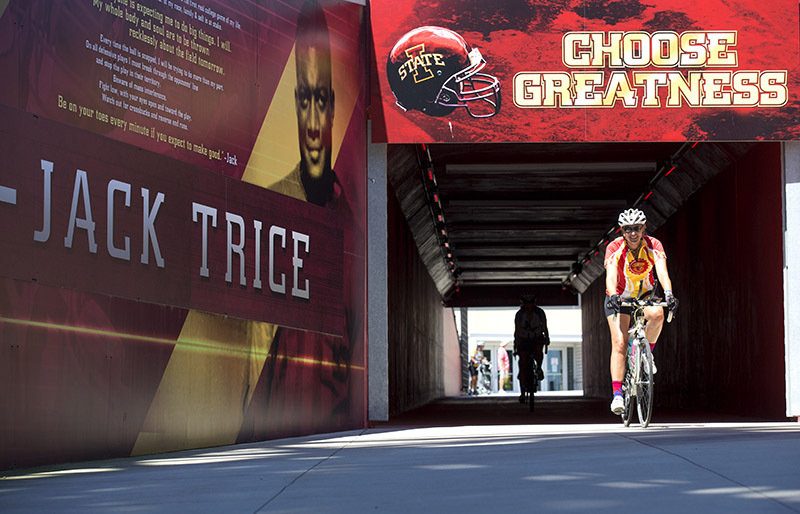 A rider comes through the tunnel into Jack Trice Stadium. 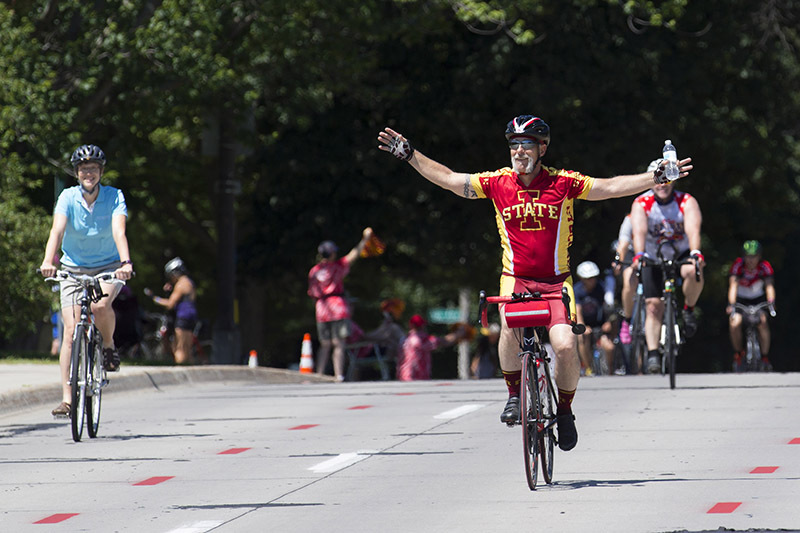 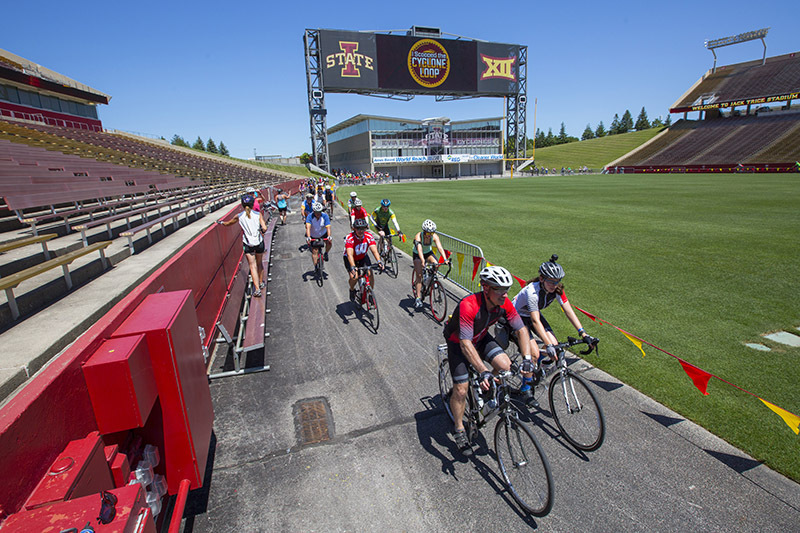 For most riders, the RAGBRAI loop around Jack Trice Stadium was the closest they've been to the football field. 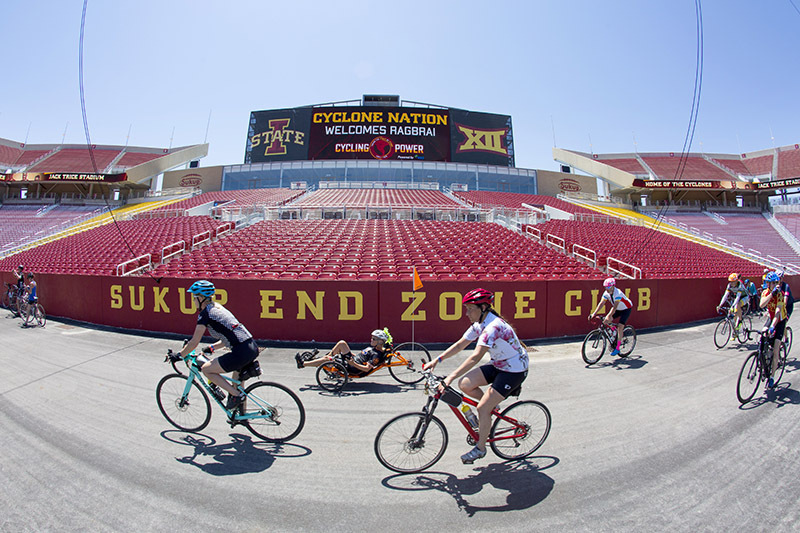 Riders pedal past the south end of Jack Trice Stadium as they take the Cyclone Loop on Tuesday. 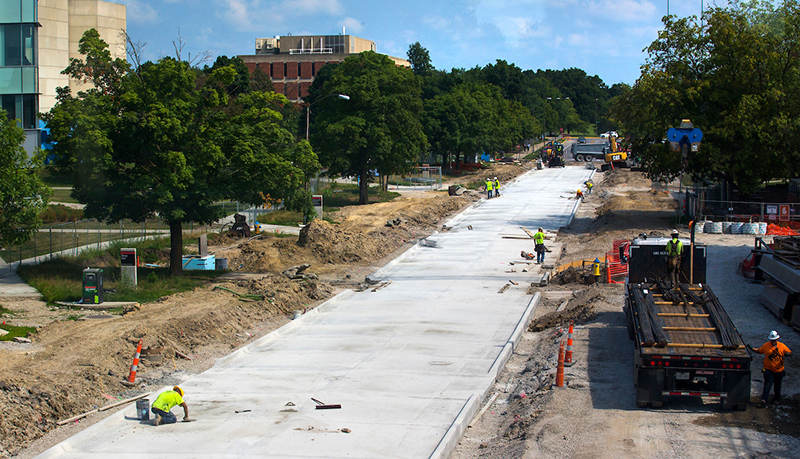 Roads in the southwest part of campus dug up since March will be back in service by Aug. 10. Two projects, involving Bissell Road and Welch Road/Union Drive respectively, have a two-summer timeline due to their size. Facilities planning and management leaders seized the opportunity to marry several necessary upgrades on one timeline: underground utilities and road replacement. The impact of the former will be a storm sewer system that can keep up with higher water runoff volumes from developing that part of campus and more reliable air conditioning in west-side buildings. The street-level impact will be wider sidewalks and narrower roads that help keep pedestrians safer.

The contractor (Carter and Associates, Coralville) paved most of Bissell Road July 20 following four months and three phases of work that managed to stay on or ahead of schedule. Crews installed storm sewer lines and new chilled water pipes beneath Bissell between the Osborn Drive intersection and the south end of the under-construction Student Innovation Center. The two replace systems that were 78 years and 50 years old, respectively.

Senior construction manager Leroy Brown, facilities planning and management, said when it's completed, Bissell will remain closed to vehicle traffic for about a week to serve temporarily as a sidewalk. Crews will install 10-foot-wide sidewalks on either side of Bissell, except in the Student Innovation Center construction site.

Weather permitting, the contractor should finish and vacate the area by Aug. 10.

Two of three scheduled phases, encompassing Welch Road from Lincoln Way to Union Drive, and Union Drive west to just east of the Enrollment Services Center parking entrance, will be completed at the south end of the project zone this summer. The storm sewers beneath them also are being replaced. Brown said a scheduled third phase will be completed as part of the 2019 work.

Phase 1 hit a snag in April when ConStruct crews unearthed a box culvert beneath Welch Road that helps divert College Creek around the south bank of Lake LaVerne. (College Creek reemerges on the east side of the Memorial Union ramp.) A thick slab of concrete covering the culvert had to be removed because it sat too high for the height of the new road, revealing the culvert, supported by a decades-old set of weight-bearing wood tiers. Brown said engineers from the university's project consultant evaluated the culvert, determined it couldn't bear any weight and took several weeks to evaluate solutions.

The decision? With the wood tiers removed, 12 eight-inch steel pilings were driven 40 feet into the ground adjacent to the culvert and filled with concrete earlier this week. They'll support a reinforced concrete grade beam across the top of the culvert, over which the road can be poured.

Weather permitting, Brown said crews will pour the Welch Road and Union Drive road sections the week of Aug. 6. They'll complete the culvert project and new sidewalks on both sides of the roads the following week.

"The work of these contractors is really appreciated," Brown said. "No one can predict the weather in peak construction season. They understand our university priorities and work hard to meet those."

When all the work wraps up in August 2019, the road corridor from the Bissell/Osborn intersection south to the Lincoln Way/Welch intersection will look and function consistently. Road widths will narrow to a uniform 27 feet, and sidewalks will widen to 10 feet. Vehicles, buses and bicycles will share a single traffic lane (13.5 feet wide) in each direction. 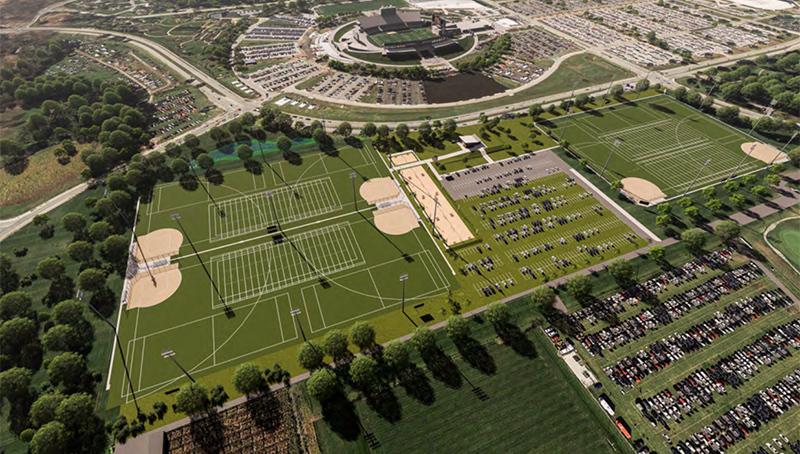 Overview of the layout at the southeast intramural fields following a proposed $10 million improvement project. At the top of the image is Jack Trice Stadium. Image courtesy of recreation services.

On the heels of improvements to the intramural fields east of the Maple Willow Larch (MWL) residence complex, recreation services proposes similar upgrades to its fields east of Jack Trice Stadium. The state Board of Regents' property and facilities committee will review a $10 million plan at the group's Aug. 1 meeting in Urbandale. The committee could send it on to the full board for final approval Sept. 13.

The plan reconfigures and renovates about 40 acres on the east side of University Boulevard and adds an irrigation system, lights and restrooms. Six softball fields, eight sand volleyball courts and about a dozen soccer/football fields would be distributed between north and south sections, separated by about 650 parking spots (grass and gravel) and a service building.

"The lights and the irrigation system will enhance and expand our capacity at what is a primary location for us," he said. "Without lights, we have to stop outdoor activities at 6 or 7 p.m. This will let us schedule intramurals up to midnight" -- a typical scheduling plan among university recreation programs, he added -- as well as later into the fall and earlier in the spring.

He said his goal is to first use the renovated fields for intramural leagues in fall 2020. Site work would begin next spring and crews would seed the grass in early fall 2019 for fall, spring and summer growing. Completing the MWL recreation fields this fall will help absorb some of the ongoing demand during construction on the southeast fields, he said.

"We are responsible for operating, maintaining and upgrading all of our facilities, outdoor or indoor," he noted.

The board is expected to approve changes to its own policy manual (chapter 1.4) to include a public comment period at all regular meetings (excluding telephonic or special meetings). Board president Mike Richards began piloting the comment period in June 2017. This replaces a little-used practice that required members of the public to go to designated campus locations prior to meetings to video-record their comments for board members.

Board members will hear presentations on the regent institutions' budgets for the fiscal year that began July 1. Iowa State leaders also will seek final board approval to:

Freeman is continuing in adviser role

University Professor of agricultural and biosystems engineering Steve Freeman will continue to serve as faculty adviser to the president. His half-time, three-year appointment took effect July 1. 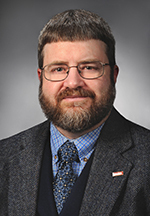 Freeman has served in the post since July 2013, when former President Steven Leath created a quarter-time position and later expanded it to 0.75 time. Ben Allen made it a half-time appointment during his interim presidency.

Freeman's duties in the president's office include:

Maximizing class time even when absent

Students aren't the only ones who miss class. Due to conflicts both personal and professional, faculty occasionally can't make it to a scheduled session of a course they are teaching. An initiative the Student Loan Education Office launched two years ago, Don't Cancel That Class, makes it easy for instructors to fill an open period with a guest presentation.

It's a simple idea that financial literacy adviser Julia Gwebu picked up at a conference and replicated at Iowa State. It offers faculty -- and academic advisers who often teach departmental and college orientation courses -- a list of presentations with wide appeal offered by campus student service groups.

In addition to sessions on financial literacy from the Student Loan Education Office, the list includes presentations by the Academic Success Center, the Margaret Sloss Women's Center, Student Wellness and the College of Agriculture and Life Sciences study abroad program.

Faculty fill out an online form to request a presentation. Two weeks of advance notice is recommended, as the initiative is designed for planned absences. In 2016-17, the first year it was available, about two dozen requests were fulfilled, Gwebu said. That grew to about 35 presentations during 2017-18, she said.

While the organizations who put on the programs often have their own procedures for scheduling presentations, the centralized list is helpful, Gwebu said. Some of the presentations work well for specific classes, and faculty have used the request form to line up programs on days they weren't absent.

"There are all these great resources, but it takes time for faculty to search out those opportunities," she said.

It also gives student services groups another shot at reaching students who may be too busy to attend their programs at other times, Gwebu said.

"Any opportunity we can get to get our material in front of them is, hopefully, a chance that they'll follow up and make an appointment with us to make a budget or meet with the Academic Success Center one-on-one," she said.

Gwebu is looking to expand the presentations, which are offered in summer, fall and spring sessions. Contact her at jgwebu@iastate.edu or 294-0677 to discuss adding programs.