Several significant west campus projects that combine underground utilities and road replacement will be coordinated on one timeline over the next two springs and summers. In phases (see map below), sections of Bissell Road, Union Drive and Welch Road will close temporarily, but by the end of summer 2019:

"These projects will pay dividends on the west side of campus for a long, long time," said assistant director for utilities Randy Larabee.

Weather permitting, the work will begin on the first day of spring break this year and next. The goal is to wrap up before thousands of new Iowa Staters arrive to campus in mid-August, said Angie Solberg, facilities planning and management project manager on the Welch Road-Union Drive reconstruction. The jobs are too large to complete during the 12-13 weeks of summer, she noted. A spring break start is preferred to beginning in May and working into late September, she added.

On March 12, Bissell Road will close adjacent to the Student Innovation Center construction site so new storm and chilled water lines can tie into that project. In early June, the utility project will move north, from the west side of Sweeney Hall to nearly the Osborn intersection. Around mid-July, the final 2018 phase will close the Bissell-Osborn intersection until about Aug. 10.

Larabee said a temporary north-south pedestrian walkway will be maintained on the west side of Bissell during the project. East-west pedestrian crossings through the project will move as needed but stay well marked.

The parking lots south of Howe (lot 3) and Hoover (lot 8) halls will remain accessible this summer. Bissell Road's lot 14 (reserved and handicapped parking) will permanently move up the street to west of the Armory.

Also on March 12, Welch Road will close at Lincoln Way for approximately 60 yards north. In early May, the second phase, north to just short of the Enrollment Services Center entrance and including the intersection with Union Drive, will begin. The final phase of 2018, from early July to early August, will proceed farther north, to just beyond the Enrollment Services Center entrance (parking lot 65). Road replacement will include reshaping this entrance and adjacent sidewalks and building a new east-end entrance to parking lot 5 south of the Student Services Building.

Lots 5 and 4 (south of Lab of Mechanics) will remain accessible this year. Solberg said there will be a pedestrian walkway on at least one side of Welch and Union throughout the project.

Up to eight CyRide bus routes use roads that will close for this work. Route detours aren't finalized yet, but generally CyRide buses will use Sheldon (northbound) and Hyland (southbound) avenues as alternatives to Bissell, and Lincoln Way instead of Union.

In March 2019, work will recommence. Underground utility and road/sidewalk replacement next summer will fill the "L" from approximately the Howe Hall front doors south to just short of the rebuilt Enrollment Services Center/lot 5 driveway.

When it's done, the road corridor from the Bissell/Osborn intersection south to the Lincoln Way/Welch intersection will look and function consistently. Road widths will narrow from as wide as 40 feet to a uniform 27 feet, and sidewalks will widen to 10 feet. A single traffic lane in each direction (13.5 feet wide) will be shared by vehicles, buses and bicycles. The Union Drive bus stop near the Enrollment Services Center will be consolidated with the larger stop near Lab of Mechanics, and lighting and landscaping throughout the corridor also will be replaced.

"The priority is to protect pedestrians in some very heavily traveled zones," Solberg said. "In effect, the narrower road lanes may encourage 'through' drivers trying to get to another part of campus to choose an alternate route." 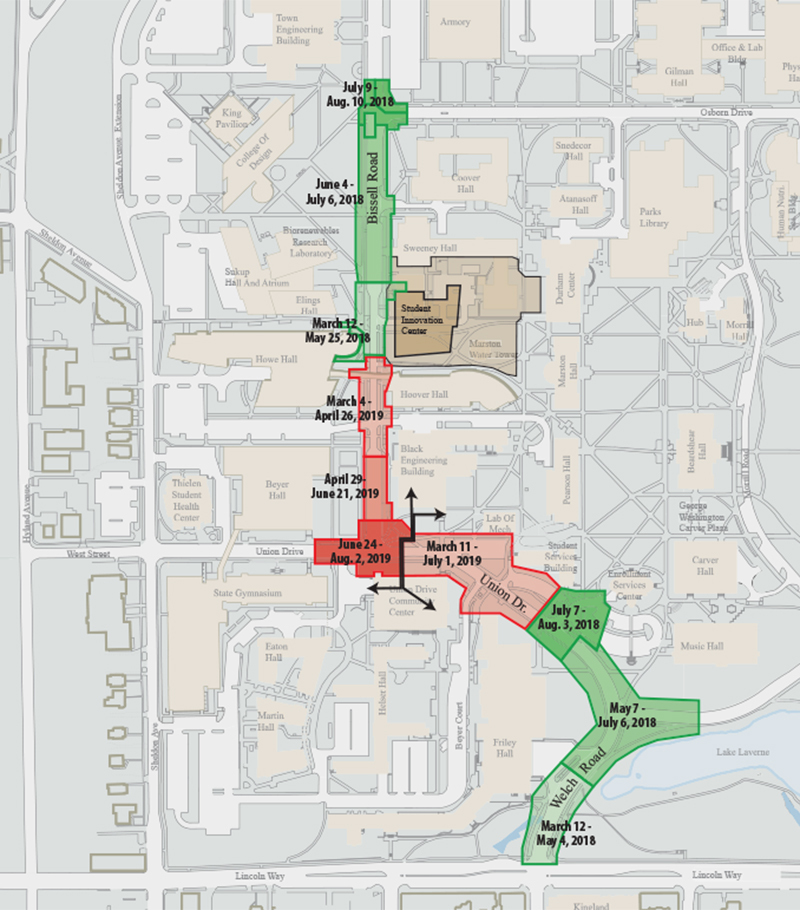 The utility and road work on the west side of campus will be phased during the spring and summer of 2018 (green) and 2019 (red) as shown. Image courtesy of facilities planning and management.

A Greek tragedy, with a twist