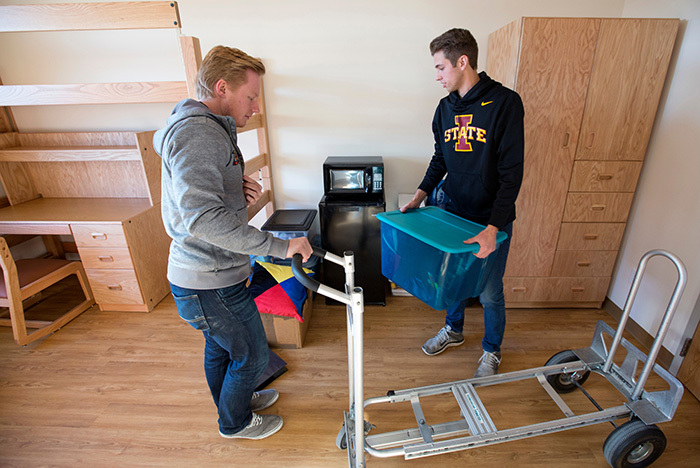 Designed with student input, the residence department's newest hall has been called "a better version of a traditional residence hall." It features larger rooms, more privacy in communal bathrooms, pockets of hallway seating, amazing views of campus and a 'front porch' off the (faster!) elevators connecting the two houses on each floor. The first floor of Geoffroy Hall is made up mostly of shared spaces, including a large lounge, community room and several dozen small conference/collaboration rooms.

Due to its mid-year opening, about one-fifth of Geoffroy Hall's 784-student capacity will be filled this spring; most spots will be assigned to incoming students in August. 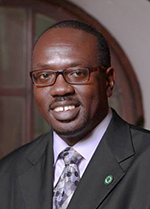 Hurte has experience working in student development, organizational management, diversity and inclusion, Title IX policy and procedure, and crisis intervention and management. He supervises strategic planning, assessment, and outreach for the Student Success thematic area in the Division of Student Affairs, which includes the departments within the Dean of Students Office, the Center for Student Diversity, and The Haven, a peer-based confidential resource center for students impacted by sexual violence, harassment, and other gender-based discrimination. At the Center for Student Diversity, Hurte plans and executes diversity programs and initiatives for undergraduate, graduate, and professional students.

Hurte holds a master’s degree (2009) in divinity from Virginia Union University, Richmond, and a doctoral degree (2004) in education with a concentration in human learning and development, from the University of Tennessee, Knoxville.

"Iowa State University is one of the nation’s great institutions and I am immensely excited to be joining this wonderful academic community," Hurte said. "I look forward to working with the dynamic team in the dean of students office and the division of student affairs, while also collaborating with partners across campus to offer programs and services that support the holistic success of all of our students, further enhancing a campus community where our students flourish, both within and beyond the classroom."

"Dr. Hurte's background and direct experiences in key areas, such as crisis management and Title IX, along with his strong student focus and diplomatic leadership style make him an outstanding fit for associate vice president and dean of students," said senior vice president for student affairs Martino Harmon. "His ability to connect with students and his experience with diversity and inclusion will make him an invaluable member of our leadership team."

The Iowa Board of Regents has named Kristin Failor state relations officer for Iowa State. Failor has served as state policy director for the National Federation of Independent Business (NFIB) since May 2010. 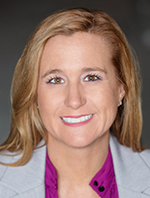 Failor, who began her new position Jan. 3, is employed by the board to coordinate state government relations for Iowa State.

“Kristin brings valuable experience in government relations, policy development and law. The range of issues she has been involved with will be an asset to Iowa State,” said Robert Donley, executive director of the board.

Prior to joining NFIB, Failor served as director of government relations for the Iowa Telecommunications Association. She also was assistant general counsel for West Bank (West Des Moines, Iowa) and a research analyst for the Iowa Legislature.

“Kristin is well-known and respected at the capitol, and we’re fortunate she’ll apply her talent and experience to assist us,” said President Steven Leath.

She is a member of several boards and committees, including: Iowa Small Business Development Centers advisory board; Iowa Association of Business and Industry economic growth and tax subcommittees; Iowa Waste Reduction advisory committee; and the Iowa Workers Compensation appeals board.

Failor received a bachelor’s degree from the University of Iowa (1997), law degree from Drake University (2004) and is pursuing a master’s of health care administration from Des Moines University.

Absent a state Board of Regents decision this spring to renew or replace it, the regent system's phased retirement option will expire on June 30. Phased retirement allows eligible employees to shorten their work schedule and move toward retirement over a two- to five-year period. That time gives the hiring unit time to plan for the future.

"The intent is to have a smooth, more efficient transition, one where employees are downloading knowledge while working a reduced schedule and departments are doing some succession planning," said Ed Holland, benefits director in university human resources. "There are costs involved, but it can be a win-win."

Interested, eligible employees should talk with their supervisors as soon as possible about applying for phased retirement. Holland noted that phased retirement is not a guaranteed benefit and, depending on a unit's finances and staffing needs, administrators have the discretion to approve or deny requests. Record student enrollments have created higher workloads in most areas of campus, and maintaining service levels with fewer employees is a difficult assignment, he said.

He urged employees to submit their applications by March 1 to allow time for the review and approval process.

B-base faculty approved for phased retirement must begin their phased program no later than May 1; all other employees must be on their reduced schedule when the program's anticipated sunset date arrives on June 30.

Faculty and professional and scientific and merit staff who are at least 57 years old with a minimum 15 years of service to the university -- they needn't be consecutive years -- are eligible to request participation in the phased retirement program. If approved, an employee can negotiate a phased period of up to five years (units may insist on a shorter period), with retirement required at the end of the specified phasing period.

Board senior communications manager Josh Lehman said that unless the regents take action to continue or modify the program at a meeting prior to June 30, it will expire on that date.

A phased retirement option has been in place at the regent universities since 1982, renewed for five-year periods since then. A board-approved, special phased retirement plan was among the strategies Iowa State leaders used in 2010-11 to navigate through several years of state budget uncertainty. 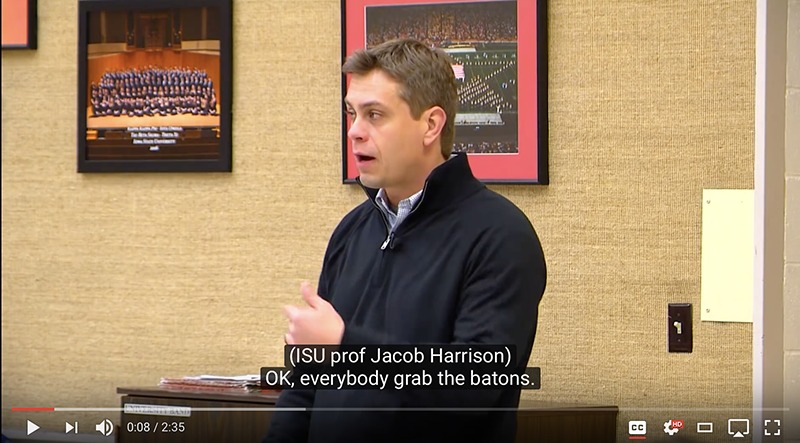 Videos on Iowa State websites must be captioned. It's an accessibility requirement. Fortunately, YouTube, which hosts many ISU videos, lends a hand by automatically captioning most videos. Those YouTube captions, however, are only a start.

You'll need to tinker with them -- correcting typos, identifying speakers and noting background sounds -- to make your videos accessible. Here's how.

YouTube's captions generally are in place an hour or so after a video is uploaded. The captioning may take more time if videos are long or have complex audio, such as background music or poor sound quality.

Fix typos and make sure the captions reflect what's actually being said on the video. Few of us enunciate perfectly. The result may be a caption that is not only inaccurate, but embarrassing.

Captions should be precisely synchronized with the action and speech on video. For easy reading, use short sentences and phrases. Try not to use more than 32 characters per line (including spaces) and no more than two lines per frame. To insert a line break in the YouTube captioning software, press shift-enter on PCs and shift-return on Macs.

Here are a few examples of how to treat identifications.

Jane Doe is on screen and speaking:

CAPTION
(Jane Doe)
Let's go to the Union for lunch.

Speaker is off-camera, in this case, a voice on the phone:

Italics are used in captions to signify that the speaker is off-screen. Use italics when you can. YouTube's basic captioning tool, however, doesn't include italics.

Here are a few examples.

A Doberman growls from the video screen:

If a red-faced man is glaring into the camera and yelling, his emotion is fairly obvious and a simple caption would suffice.

(man)
I'm not going to take this anymore!

However, if the man's face is averted or off-screen, the caption should help describe the emotions conveyed.

(man)
[furiously] I'm not going to take this anymore! 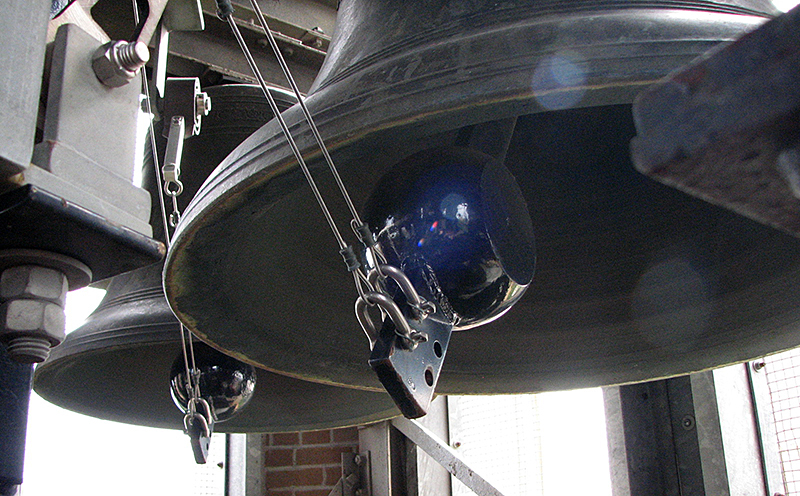 The free concert, which begins at 11:50 a.m., includes spiritual and hymnal music selections and the anthem, "Lift Every Voice and Sing." Like all daily carillon concerts, the performance will be live-streamed, but not recorded or archived.