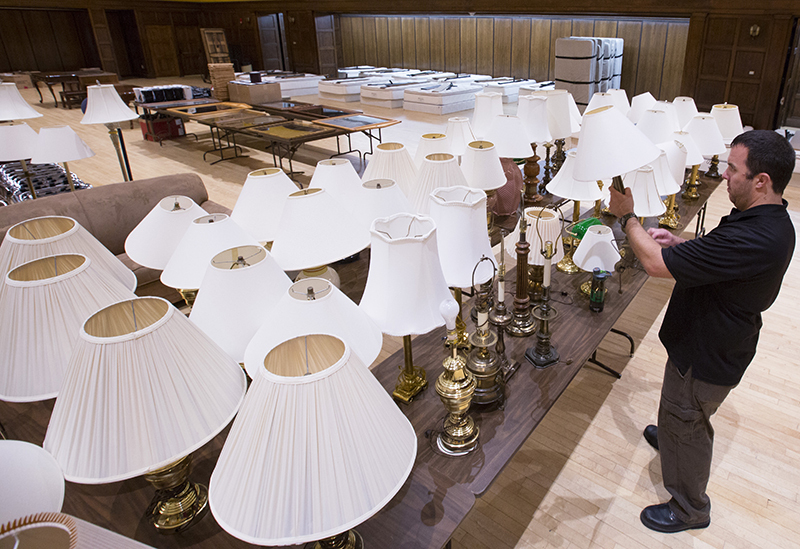 Jim Brockpahler, entertainment programs coordinator for the Memorial Union, looks over one of the many lamps available for sale from the former Hotel Memorial Union. Photo by Christopher Gannon.

Hoping to pick up a bit of Iowa State history? The contents of the Hotel Memorial Union's remaining 29 guest rooms will be sold at a public garage sale on Thursday, July 14 (4:30-7 p.m., MU Great Hall). Buyers are asked to make arrangements to move their purchases out of the building by 9 p.m. that evening.

As first announced in April, the Hotel Memorial Union ceased operations on July 1. Beginning next month, the residence department will operate the top three floors of the Memorial Union as student housing, in response to the high demand for on-campus housing.

Pricing sample of some items at the sale

Imagine a hotel room and, with the exception of the telephone and television, nearly every item that furnishes it will be sold. The sale will include king and queen bed sets that were purchased in 2015 and are in excellent condition. Buy the bedframe, and the mattress and box spring comes with it.

ISU Surplus is conducting the sale for the Memorial Union. This is a liquidation sale and all items will be priced to sell; large items will have tags that buyers tear off to make their purchases. Buyers must pay by cash or check; credit cards will not be accepted.

No sale preview is scheduled and shoppers are asked to not queue up outside the Great Hall prior to 3 p.m. the day of the sale. Parking is available in the MU ramp (Lincoln Way entrance is open), and the semicircle drive on the west side of the Memorial Union will be reserved for sale pickups. 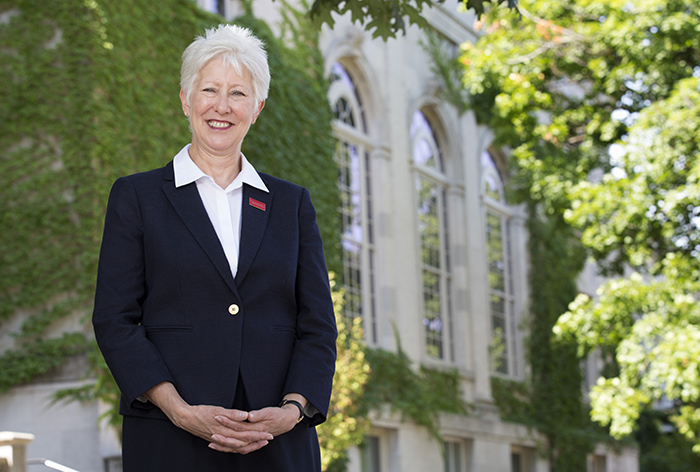 Laura Dunn Jolly began July 5 as the third dean of the College of Human Sciences.

Jolly arrives at Iowa State from the University of Georgia, Athens, where she served since 2007, as dean of the College of Family and Consumer Sciences and associate director of cooperative extension and the experiment station (2007-10), vice president for instruction (2010-15) and professor of textiles, merchandising and interiors.

In early May, shortly after she was announced as the next dean, Jolly introduced herself to the university community in a two-minute video.

Iowa State's long-standing commitment to economic engagement has earned it national recognition from the Association of Public and Land-grant Universities. APLU has designated Iowa State an Innovation and Economic Prosperity University.

APLU launched the program in 2013 to recognize universities that are leaders in spurring regional economic development, and has since designated 54 institutions as Innovation and Economic Prosperity Universities. Iowa State is the first university in Iowa to receive the designation.

"We're proud to be recognized by APLU. This designation is affirmation of the breadth of our economic engagement programs throughout the state, our record of achievement and our plans for continued service," said President Steven Leath.

The designation required an extensive self-study, which involved an in-depth look at the university's economic development enterprise, how it fits in the university's strategic plans, how it's communicated and what improvements can be made. Following the self-study, an independent team of experts reviewed Iowa State's study and recommended the APLU designation.

"One of the benefits of the self-study and the rigorous independent review process is that we get a fresh, candid view of not only what we're doing well, but also what we can do better," said Michael Crum, vice president for economic development and business engagement.

"Public research universities such as Iowa State serve as economic engines for their local communities and states by conducting cutting-edge research that yields breakthroughs that improve life well beyond the confines of campus," said APLU president Peter McPherson. "Equally important, these institutions cultivate the talent necessary to help fledgling businesses take flight and ensure existing enterprises have the human capital they need to maintain their dynamism."

Among the achievements cited in Iowa State's self-study are:

Another enrollment record has been set this summer, with 11,942 students attending the summer sessions. That's an increase of 306 students over last summer's previous record. The census day for summer enrollment is the 10th day of the second session, though the count reflects all registration through that day and includes classes that concluded prior to it.

Enrollment is up over last year among undergraduates (an increase of 241), graduates (65) and post docs (5). Enrollment by professional (Doctor of Veterinary Medicine) students is down by five students.

The growth is in students learning online. The subset of students enrolled only in online or other distance options increased 431, up to 3,388 students this summer. Students either attending class on campus or enrolled in a combination of on-campus and online courses declined by 125, to 8,554 students.

Across the university, Iowa State offered 41 more online course sections this summer than it did a year ago, with 26 of those in the College of Liberal Arts and Sciences.

Woolley said the LAS college targeted courses that "would help set up students for fall semester," as well as some that would help ISU students remain Cyclones for summer school instead of enrolling elsewhere.

The LAS college marketed its successful Discover Summer Online program this spring in the Iowa State Daily, on CyRide busses, in social media and an email campaign to academic advisers and students.