As much as 1,000 tons of coal per year was delivered to the 1890s-era power station, located just north of today's Lab of Mechanics building. Contributed photo.

That's what power plants were supposed to do in the 19th century. Engineering professor George Bissell set the bar higher when he designed the mechanical systems for Iowa State's first power plant. When it opened in 1891, the plant, just north of Engineering Hall (today's Lab of Mechanics) supplied Engineering not only with electricity, but heat.

At traditional plants, "waste steam" was released into the atmosphere. At Iowa State, that steam was reused to help heat Engineering Hall and that bit of recycling significantly increased power plant efficiency. When a power plant generates both power and heat, it's called "cogeneration." Thomas Edison pioneered cogeneration in the world’s first central power plant in 1882 at Pearl Street Station in Manhattan.

The popularity of cogeneration waxed and waned over the years. But Iowa State never lost faith in the efficient process and, this year, the campus marks 125 years of cogenerated power.

Facilities planning and management's utility services department will observe the milestone with an open house Thursday, April 21 (1-4 p.m.), at the power plant (616 Beach Rd.). The event includes a 2 p.m. presentation, tours and refreshments.

"We hope many in the university community will join us to celebrate cogeneration, which is as good an idea today as it was 125 years ago," said Jeff Witt, director of utilities. "With new technologies, cogeneration is more efficient than ever.

"The efficiency of Iowa State’s cogeneration plant was 60 percent in 2015 as compared to 33 percent for a conventional power plant," he added. "Iowa State traditionally used coal in its boilers, but has just completed a project to convert a portion of the plant to natural gas. Plant capacity is now 60 percent natural gas and 40 percent coal, and plant operators can select fuels to minimize the cost of energy for the campus."

Following are a few historical moments in the evolution of Iowa State's utility services.

The first known Iowa State power outage was 1892, when a boiler in the power plant ruptured a tube. The college was without electricity for several days.

In the early years, the facilities department was the Department of Fires, Lights and Incidentals.

Coal rolled into campus on the Ames and College Railway, constructed in 1891. Everything else had to be done by hand. Workers unloaded the coal into wheelbarrows, wheeled it into the plant, dumped it onto the floor and shoveled it into boilers.

The campus water system in the 19th century was an untidy collection of springs, cisterns and shallow wells, many of which failed during droughts. Reliable water arrived in 1897 with civil engineering professor Anson Marston's 168-foot tower and a 2,200-foot well. The tower remained in operation until 1978, when the university switched to city water.

The first steam tunnel, a 460-foot-long brick structure from the power station to the new engineering building -- Marston Hall -- was installed in 1902-03. Marston was the first campus building without its own heating boiler. Today, Iowa State has 4.8 miles of tunnels and 2.5 miles of direct-buried steam and condensate lines to deliver steam to the campus buildings and return the condensed steam back to the power plant to be used again.

Time to retire the boilers

Old Main, located where Beardshear Hall stands, was destroyed in 1902 by a fire that appeared to have started in the boiler area. Officials agreed that the university needed a new, larger power station that could supply steam heat to all campus buildings (boilers could be abandoned) and meet ever-increasing electricity needs.

The first phase of the central heating plant was erected in 1907 on the east edge of campus, where the current power plant stands. The original brick structure, with arched windows and a gable roof, has long since been replaced with a century's worth of remodels and equipment installations.

Footnote in a war

The 60s were cool

In 1968, a chiller (which uses steam to produce to cold water) was installed in the power plant. At that point, Iowa State could provide all the heating, cooling and electricity needs of the university through cogeneration, or "trigeneration," as it's sometimes called.

The state Board of Regents is expected to give final approval to faculty promotions and tenure applications for the 2016-17 academic year when it meets April 20-21 at the Iowa School for the Deaf in Council Bluffs. The meeting agenda and summary documents are online. Audio of public portions of the meeting, including committee meetings, will be live-streamed on the board's website.

Iowa State leaders have forwarded 58 promotion and/or tenure requests to the board. A year ago that number was 70.

At its June 9 meeting, the board is scheduled to vote on salary increase proposals for regent employees. Ahead of that, representatives of non-unionized employee groups at the three universities will share comments with board members. This includes the Faculty Senate and Professional and Scientific Council presidents from Iowa State.

Following initial reviews at its March meeting, the board will give final approval to parking, dining and residence system rates for the 2016-17 academic year.

Students have many variables in choosing a residence hall, for example, traditional vs. suite-style room, presence or absence of air conditioning, or number of roommates. Depending on their selections, room rates would increase 2 to 3.5 percent (between $119 and $217) next year, as proposed. Apartment rates in Frederiksen Court and off-campus buildings leased by the department from private developers would go up about 3.5 percent (between $153 and $269) for the academic year, as proposed. Rates in Schilletter/University Village would go up a proposed 2 percent ($95-$114, depending on the size).

The board also will be asked to approve two ISU academic changes:

In other business, the board will consider giving Iowa State permission to: 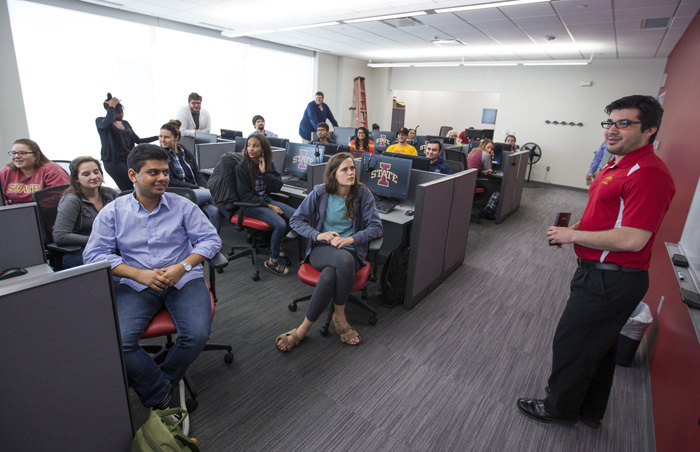 Prior to the start of a shift, ISU senior and program assistant Eli Palamidis (right) shares a few anecdotes with his colleagues in the ISU Foundation's new call center in campustown's Kingland Building. After 25 years in the Durham Center basement, last month the call center joined university relations and the Iowa State Daily Media Group on Kingland's second floor. The university is leasing the floor from Kingland Systems Corp., which has offices on the third floor.

Operational four hours a day, seven days a week, the foundation's call center employs about 120 students part-time, 32 of whom can be on duty at a time. Collectively, they secure $2 million annually in gifts from Iowa State alumni and friends.

Still scheduled to move to the Kingland Building when their spaces are completed this summer are the offices (3) of institutional research, responsible research and research integrity.

Iowa State students and visiting scholars who qualify for the Student and Scholars Health Insurance Plan (SSHIP) will have more money in their pockets beginning this fall.

On Aug. 1 (with open enrollment starting July 1), students and visiting scholars at all participation levels will experience premium decreases. For example, single undergraduate students enrolled in the plan will pay approximately 11 percent less for monthly health insurance premiums versus last year. Visiting scholars with a spouse/dependent partner and at least two children will pocket a 57 percent monthly savings compared to a year ago. A detailed look at the premium changes is online.

The reduction in premiums stems from Iowa State’s decision to move SSHIP to a self-insured model. This means the university manages the risk of the program and is responsible for paying the claims generated by SSHIP members. Wellmark will serve as the third-party administrator, and will be responsible for claims processing. The change requires no additional ISU staff.

"The current program with Aetna is a fully insured arrangement where Aetna sets the price for the university, and the students and scholars pay that price in order to secure coverage," said Ed Holland, director of benefits. "Because Aetna was ultimately responsible for the risk of the program, Iowa State had much less control or input into the premium-setting process."

The change benefits students and visiting scholars with reduced premiums, but the new model also offers advantages to Iowa State as a whole.

"Because the university has more control over premium setting, we can ensure that the plan offers the best coverage possible for premiums that are focused on the interests of students and scholars," said Martino Harmon, senior vice president for student affairs. "The changes in administrative processes should provide better services, create staff efficiencies and offer a better experience for the students and visiting scholars."

Harmon added that the cost savings from the new model would help keep premiums low and provide the reserves required for a self-insured plan. In addition, Holland said Wellmark can secure better discounts with providers within the state.

Approximately 6,000 students and visiting scholars are enrolled in SSHIP. For some, participation is optional; for others it's not. The following groups must enroll in SSHIP or a similar health plan:

The remaining groups have the option of enrolling in SSHIP:

Harmon said the university will continually seek improvements to SSHIP.

"We will monitor the impact of this positive change and also continue to engage when necessary to ensure that the needs of our students and visiting scholars are being met," he said. 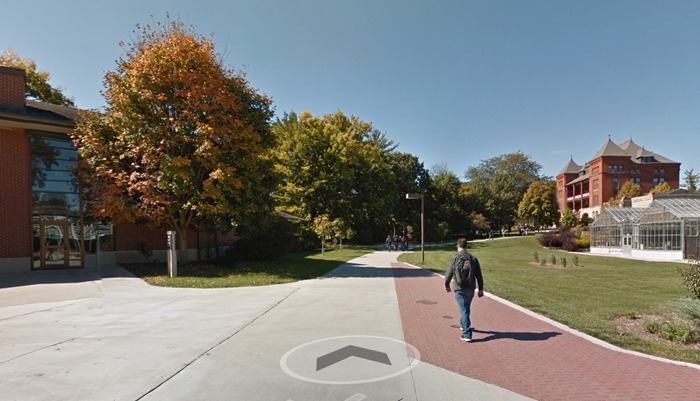 This screen shot along the walkway between the Jischke Honors Building, left, and Catt Hall is one of Google's streetview images of campus sidewalks recorded in October. Viewers can drop the maps' yellow icon right on the sidewalk and start "walking." The spiderweb effect is a normal part of the program that lets viewers jump directly to a nearby walk.

Expect to see a row of tents north of Jack Trice Stadium on Saturday, but these won't be used for tailgating. Instead, ISU student groups and organizations will be showcased prior to the spring football game.

In its third iteration, Cyclone Market was developed by the student government to give organizations an additional fundraising opportunity. The event will run from 10 a.m. to 1 p.m. on Saturday, April 16.

"We want an event that allows groups to fundraise for themselves and promote their organization," said Danielle Nygard, student government senator and chair of the Cyclone Market committee. "The groups want to show off what they've been doing and their purpose."

Nygard said 33 groups are participating this year, up from 23 last fall and 23 last spring. The move from central campus to the Iowa State Center parking lots was strategically planned to take advantage of football fans attending the Cyclones' spring football game.

"It's still new and we're finding what's best for us," Nygard said, adding that they plan to make it an annual event.

From music, to plant sales, to vehicle displays, to ethnic food and crafts, visitors can enjoy a wide variety of family-friendly activities, merchandise and entertainment. A list of participating student organizations is available on the Cyclone Market Facebook page.

In addition to the Cyclone Market, visitors can enjoy other activities prior to the spring football game at Jack Trice Stadium. Admission is free and parking is available in the Iowa State Center lots.

The spring game kicks off at 1 p.m. Fans should enter through gates one and three and sit on the east side of the stadium.

Watson also is working with ISU faculty and students on a 1:5 replica of the campanile and carillon, which will include 27 workable bells. A model of the replica will be on display at the mechanical engineering design expo on April 26 (noon-4 p.m., Howe Hall atrium).

Carillon events include two concerts and a lecture.