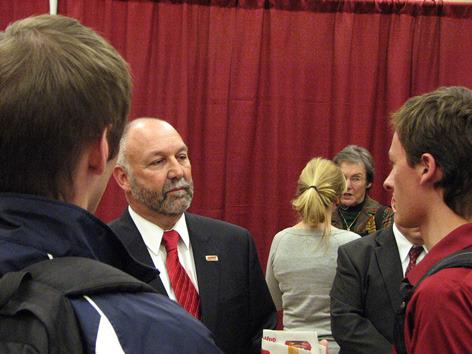 "All in all, things are good," Leath said. "I'm very pleased with where we are and where we're going."

"We're doing really, really well. In the first year and three-quarters, we've raised nearly $82 million -- way ahead of the $30 million per year goal."

"What we're doing now is spending quite a bit of time organizing for another campaign."

"It is highly likely, you should expect that we'll be larger than 34,000 this year. We'll know more by summer."

"It's exciting that the minority population is growing the way it is. We're more diverse than we've ever been."

"The one thing we did do was put off the academic program part until the fall because they're moving so quickly -- they want to do a lot of this by the summer. So we're trying to do much of the efficiency work on processes and things like this during the summer."

"They asked each president to present a possible reallocation model. We presented an actual plan on how to reallocate the money. It depends on exactly where your numbers come out, it's somewhere between a $50-$75 million swing from Iowa to the other two schools. So, you can imagine, it wasn't completely popular."

"The bottom line is, in the next two weeks the task force wants to have a model and vote on it and send it to the regents for voting as early as June. This is unprecedented speed for money of this magnitude. And you can imagine, it has huge potential implications for this school. Even if it's a $15-$20-$30 million shift, I don't know any time when we'll have an opportunity to have $20-$30 million come to us on a recurring basis that is totally unobligated. If that happens, I'll be coming back to this group because we need to have a real thoughtful approach to how to utilize that money to move this university forward."

"We've hired about 140 faculty members going into this academic year. We're recruiting for 114 at once, which is huge."

"The provost and I are really encouraging the deans to move aggressively to fill these."

"We need to free up more space on the main campus."

"We're going through a prioritization to move units off the central part of the campus to free up more space for faculty and students."

"We'll end up with over 50,000 square feet -- between the building in the research park and the Lincoln Way space -- that will move off of central campus."

In senate business, senators unanimously approved a pair of graduate degree programs in gerontology. The doctorate of philosophy and master of sciences degrees will be offered by the interdepartmental gerontology program.

A proposed minor in learning and leadership sciences also was approved, but did not receive unanimous support. The program would include six departments -- agricultural education and studies; agronomy; animal science; food science and human nutrition; horticulture; and natural resource ecology and management.

Rob Wallace, chair of the academic affairs council, said the College of Liberal Arts and Sciences recently approved another proposed minor in leadership studies. He said it likely would come before the senate in the fall.

"My own personal perspective is that these programs are not overlapping and serve different cohorts of students to provide leadership opportunities for students in several different colleges, with a slightly different curricular structure," Wallace said.

Senators will vote next month on four curricular items, including:

Over the next few months, faculty and staff email accounts gradually will be transferred to Microsoft's cloud-based service. The transition promises to be fairly easy. If you view email on your Outlook desktop application, you'll continue to do so, using the same application you currently have. If you access email via Outlook Web App (OWA), you'll find a few changes in a fresh interface. But the OWA website largely retains its familiar look.

Why make the change?

Details on the migration to Office 365.

Will the new system meet federal requirements for information security?

Microsoft assures that its storage system conforms to federal requirements, such as the Family Educational Rights and Privacy Act (FERPA), which protects the privacy of student educational records; the Health Insurance Portability and Accountability Act (HIPAA), which protects individuals' health information; and federal regulations on exporting technologies to other countries.

Are other universities adopting the Office 365 mail system?

Will Office 365 work on mobile devices?

Yes. Setup on mobile devices should be as easy or easier than it is now.

What's the schedule for moving faculty and staff mail systems to Office 365?

ITS will begin migrating email accounts soon and the process will continue throughout the spring and part of the summer. A transition schedule will be developed and published on the ITS website. ITS staff will work with departments and units to schedule transition times that are convenient.

What happens during the migration process?

Generally ITS staff will migrate all email accounts in a department overnight. The next morning, individuals will follow a short set of emailed instructions to set up their new accounts. Tech support and training sessions will be available throughout the migration period.

Am I getting new software with the migration?

You'll continue to use the same desktop application that's installed on your computer -- that is, Outlook 2013 or 2010 for PC or Outlook 2011 for Mac. However, the Outlook Web App, which is part of Exchange 2013, will be new to most. The current Outlook Web App is the 2010 version.

Is training for Office 365 available?

The Office 365 web page offers instructions on using the mail program. Additionally, an ITS team will be doing "road shows" to introduce Office 365 to key campus groups. The schedule for Microsoft Office transition will include the "road shows" schedules as well.

How does the messaging service work?

Microsoft's Lync application provides instant messaging capability. It's already installed on the Office 365 Outlook Web app and on university computers with Outlook 2013 for Windows. If you want messaging capability on Office 2010 for Windows or Office 2011 for Mac, you'll need to contact your IT coordinator or the Solution Center, 4-4000, for help installing the software. You'll only be able to exchange messages with those who have Lync installed, are online and have their messaging status set to "available."

Are there any issues that have cropped up during early migrations?

Are there plans to transition student email accounts to Outlook 365?

Google's Gmail will remain the standard email account for students. However, students will have access to Microsoft Office 365 Pro, which includes the email program. Those who wish to use Outlook 365 can set up their own accounts.

Members of the Professional and Scientific Council approved another executive committee position at their April 3 meeting. The vice president for equity and inclusion will help recruit individuals from underrepresented groups to participate in P&S Council, among other duties.

Council president-elect Amy Tehan said the creation of a single position, rather than a committee, would better serve the council as a central point of interaction for all council subcommittees.

"We felt that [equity and inclusion] should be a function of every single committee," she said.

Office 365 on the horizon

"Any time there are changes, or anything happens with email, we want to make sure everybody's got a heads up," Lohrbach said. "Within the last two weeks, we've started doing what we call 'road shows' on this new process."

He said users won't notice a big difference in the functionality. Upgrades will be scheduled with departments over the coming weeks.

The April 14 lunchtime carillon concert will be (almost) all in the family. A trio of siblings comprises half of the carillonneurs that will perform at 11:50 a.m. Monday. 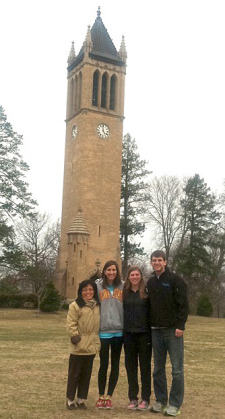 "They will play together, sitting on the same bench, sharing the 50 bells and keys ... and will NOT get into a fight," joked ISU carillonneur Tin-Shi Tam.

Entrance of the Queen of Sheba, George Frideric Handel