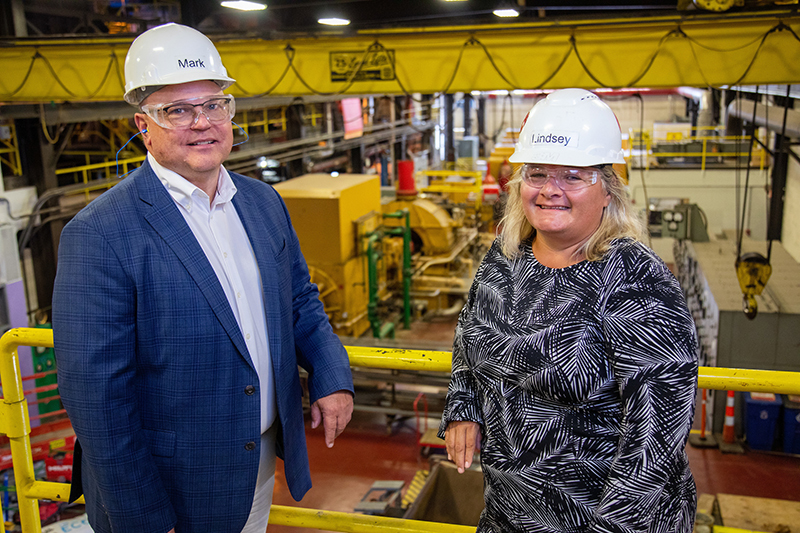 In 2015-16, Iowa State replaced three of the university's five coal-burning boilers with natural gas-powered boilers in a new east addition to the power plant. This spring, contractors began a two-year process to convert the other two boilers to burn natural gas, one this summer and one in the summer of 2023 -- or when they're not in service. The $16 million project includes removing the structures and equipment that supply coal and limestone to the boilers and collect the ash byproduct, installing gas burners and control systems, and expanding the natural gas supply lines into the power plant. The work should wrap up in the spring of 2024.

Assistant director of utility services Lindsey Wanderscheid and director Mark Kruse talked with Inside about the end of Iowa State's 132-year coal era.

Iowa State is replacing one fossil fuel -- coal -- with another, natural gas. Is this a win?

We consider this a stepping stone. Natural gas is a better energy resource than coal, and we need to take incremental steps. Converting these last two coal boilers accomplishes a few things:

Iowa State's boilers burn coal or natural gas to produce steam, which is used first to generate electricity for campus. Depending on the time of year, that steam is distributed around campus to heat buildings or powers equipment that chills water used to cool buildings. Because of cogeneration, the ISU power plant averages 70% efficiency, while a typical power plant might be 35% efficient.

Why not switch to renewable energy sources instead of natural gas?

Our challenge is how to reliably and cost-effectively heat our campus using only renewable energy sources. Fifty percent of the energy we use is for heating buildings (by burning coal or natural gas). Renewable electricity is readily available but can't be used to heat a campus of our size without significant and expensive changes to our utility system and buildings. In our plant, we need thermal energy to produce steam; it's the base for cogeneration. By using natural gas now, we quickly achieve a large reduction in emissions at a lower annual cost.

Is the university using any renewable energy?

Through cogeneration, we make about 52% of our electricity. It's our cheapest source of electricity. The other 48% we purchase from the city of Ames, and it's all renewable: 8-10% of what we use comes from a wind farm in northeast Story County and the community solar farm on Airport Road, and 40% is purchased from renewable energy sources via renewable energy credits (RECs). This actually exceeds the sustainability plan's strategy of "purchasing primarily renewable electricity" for campus.

Iowa State received notice last week we are No. 17 among the top 30 college and university partners in the U.S. Environmental Protection Agency's Green Power Partnership program.

What's next for our five natural gas boilers?

We're getting ready to do a study to look at some future options, consider our current equipment, estimate some costs and see what makes sense for Iowa State. We're in the process of bringing a consultant on board, and we hope to get a study completed in the next year. The possibilities out there include electric, renewable natural gas (from anaerobic digestive processes) or hydrogen-powered boilers, but implementation costs and operation costs right now for those would be staggering. We are sensitive to changes that would have a big impact on the rates our campus users pay.

What will happen to the two outdoor coal storage sites?

The smaller one (east of the power plant) is on a concrete pad that we'll clean and use for equipment or expansions. We'll do some testing on the larger one (north of the railroad berm and east of Haber Road in the Ioway Creek flood plain) to assess what we need to do. The process might involve removing soil and bringing in fill to restore it. We dug up the base several years ago (simply to use that coal) and we hit clay. The idea is that utility services would return that land space to the university.