Why riders take the plunge to join ISU van pools 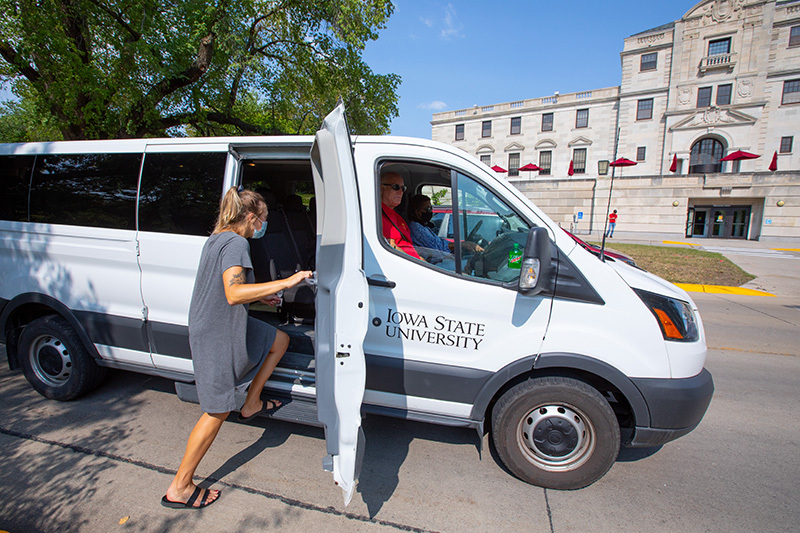 Memorial Union graphic designer Kenzie Hosch climbs into a van outside the MU for her van pool commute home on Aug. 3. Photo by Christopher Gannon.

An out-of-town commute adds some complication and expense to working on campus. But many ISU employees diminish the downsides of a daily drive to Ames by taking advantage of a program that makes getting to work cheaper and easier, decreases their carbon footprint and increases their connections with colleagues.

Those are some of the main benefits enjoyed by the 30 or so university employees who use the van pool service offered by transportation services, which provides a van from the ISU fleet for the pool to use for its commute. To cover vehicle costs, including gas, riders pay a flat monthly fee of $100-$150, depending on the route. To account for the time they spend behind the wheel and coordinating logistics, drivers don't pay a fee. Current routes run from Ankeny, Des Moines, Urbandale and along Highway 30 west of Ames.

It's a great deal for employees, and the financial benefit is the most common reason faculty and staff cite for participating, said Teri Jensen, transportation services manager. That's been the main motivation for Leland Harker, who has been working at the university for 33 years and using a ride pool to get to campus from his West Des Moines home nearly that entire time.

For an employee who lives in the Des Moines metro area, the annual out-of-pocket savings are roughly $2,000 per year and three to four times that based on the IRS mileage reimbursement rates designed to consider maintenance costs, said Harker, an electronics technician in the electrical and computer engineering department.

"Everybody saves a pile of money," he said. "You can use it to remodel the bathroom or something."

The financial boost is far from the only benefit. After Erika Abusharkh, AmeriCorps program director for the Child Welfare Research and Training Project, began working at Iowa State in the winter of 2018, she quickly tired of driving the stretch of Interstate 35 between Ames and her home in Johnston, a corridor co-workers jokingly called the Daytona 500.

"I found myself getting really stressed out by that drive," she said.

Since joining the Urbandale van route, she has appreciated reducing her greenhouse gas emissions and locking in a consistent cost for commuting, via the pre-tax payroll deductions for the van pool fee. And there's no more driving stress.

"It's nice to just sit back and not be thinking about the road," she said.

Susan Ray, data visualization analyst for institutional research, rides on the Highway 30 west route that began July 1, with stops in Jefferson, Ogden and Boone, where she lives. She was hired during the pandemic, so joining a van pool meant she didn't have to figure out where to park and gave her a built-in need to stay on schedule. It's also socially beneficial.

"As someone relatively new to this part of the state, I'm meeting new people I otherwise wouldn't have met," she said.

The chattiness level in the van depends on the day, Harker said.

"Some days we have conversations. Sometimes people like to just sit in quiet," he said.

Sharing a ride to campus isn't possible for every employee. It requires a set schedule, for instance. But it's not as restrictive as some commuters might think. Van pool riders collectively decide on their schedule. Participants get 10 daily parking passes per year for instances in which they need access to their vehicle. And if an unexpected emergency need to go home during the day emerges, transportation services will lend a van pool participant a fleet vehicle.

"We're really flexible. That's how our department runs, in general. We are here to keep Iowa State University employees on the road," Jensen said.

Harker regularly distributes fliers advertising the van pools, targeting out-of-county vehicles in staff parking lots. Abusharkh considers herself a self-appointed van pool ambassador, as she often shares her experiences with campus colleagues. Both would like to see more campus employees use the service.

"We see the same faces in cars every day," Harker said. "It's hard to pry people out of their vehicles. They like to have access to it at all times."

In her time commuting by van pool, Abusharkh hasn't had any trouble getting around Ames when needed during the work day, either by sharing a ride with a co-worker or taking CyRide. It takes a shift in thinking, but she hopes that seems more plausible for people, after they made changes to their routines because of COVID-19.

"Personally speaking, it's been only benefits, as far as I can see," she said.

Jensen said transportation services would love to see more groups form, as routes and participation are down slightly from pre-pandemic levels.  A route can run with as few as five employees, and Jensen also keeps a list of interested employees who live in areas where there isn't enough interest yet. Email her or call 515-294-1882 option 3 for more information. 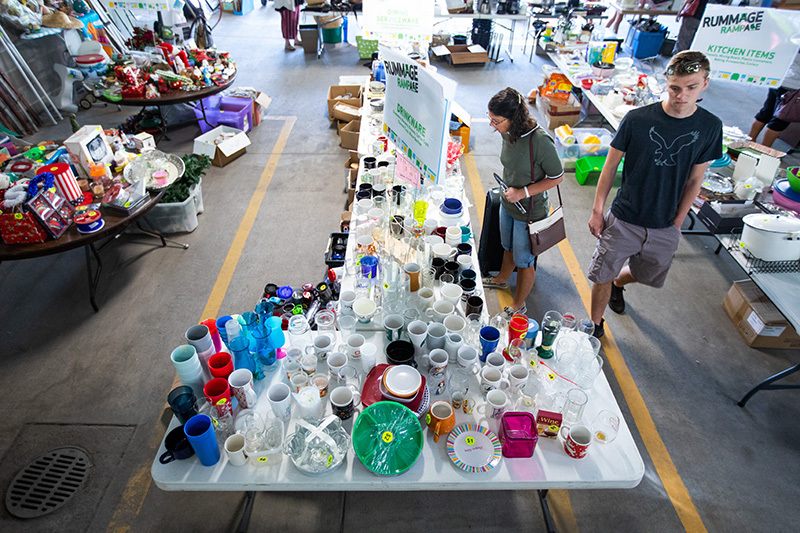 The nine-day event at the Ames Intermodal Facility saw more than $40,000 raised and hundreds of couches and chairs kept out of the waste stream.