'It had to be done': Devotion fueled effective contact tracing 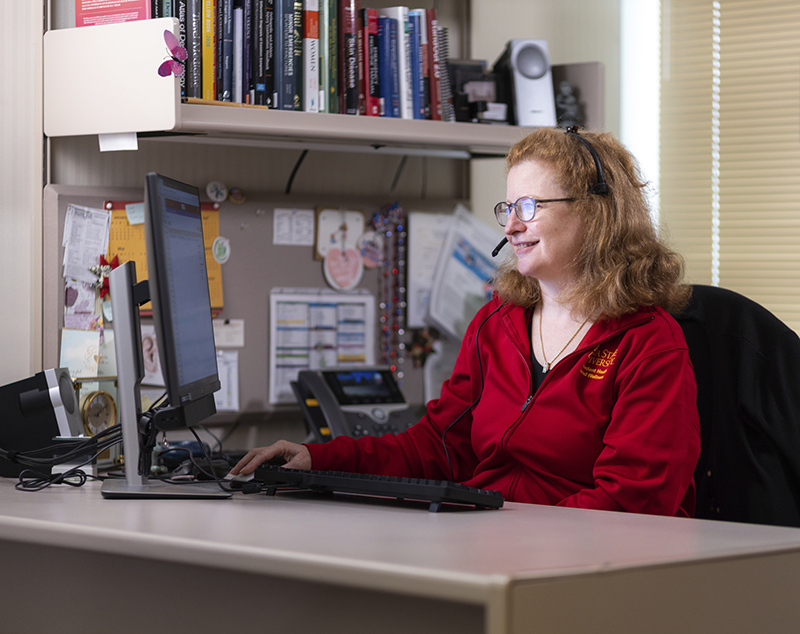 For the past eight months, Maria Pringle has spent a lot of time on her cellphone at night -- not as a diversion from the COVID-19 pandemic but to accomplish an essential and arduous aspect of how Iowa State has responded to it.

Pringle and her colleagues at the Thielen Student Health Center, with help from many others across campus, built and for months staffed the university's contact tracing operation, which identifies students and employees who need to quarantine after being exposed to someone who tested positive.

Before a late September upgrade to a more automated process, staff personally texted every contact daily during their quarantine to check on symptoms. The heavy workload often extended late into the evening, and Pringle -- an advanced registered nurse practitioner currently devoted to the center's COVID-19 efforts instead of her usual patient appointments -- was the primary texter.

After the initial spike in cases when students returned in August, as many as 1,200 contacts were in quarantine at the peak. Pringle was texting hundreds of them every day, with assistance from health center medical assistants.

"It had to be done, and there was no other way to do it. We had to take care of our students, our staff and our faculty. We just put everything else on hold and took care of it," Pringle said. "A lot of people just gave up their lives for a couple of months."

Pringle was among many ISU personnel who embraced new roles and spent long hours to create, run and refine Iowa State's contact tracing system, which usually notifies contacts within a couple days of a positive test.

"The structure built at Iowa State to produce that turnaround isn't happening anywhere else in the state," said Kurt Beyer, senior risk and systems analyst in the risk management office.

Results of Iowa State COVID-19 tests, processed at the Veterinary Diagnostic Laboratory, can take up to 48 hours but usually come back within 24 hours. Those who test positive are interviewed often within hours of the results, and the contacts they identify get an instant text.

"Our ability to turn around a test within 24 hours, have a case contacted typically within a few hours after their test, then have contacts notified by text immediately -- it's about as short as you can get," said student wellness director Brian Vanderheyden.

Contact tracing is a two-step process. Case investigators call people who test positive to offer support, answer questions and -- most importantly, from a public health perspective -- determine their close contacts dating back to two days before they first developed symptoms (or two days before the day they were tested, if they don't have symptoms). Then contacts are notified and asked to quarantine for 10 days, with check-ins throughout that period to see if they develop symptoms.

After the pandemic began in the spring, it wasn't immediately apparent that the university would need to provide its own contact tracing, though the practice is a vital and longstanding method of slowing the spread of an infectious disease. Iowa State's contact tracing began in tandem with Story County Public Health. But as case counts rose in the late spring, the need for an independent campus system became clear.

"The most important factor is time. You have to reach the contacts as quickly as possible. As the numbers got higher, it was evident we had to do it or it wasn't going to get done in a timely way," Pringle said.

Pringle and Sara Parris, associate director of the health center, created a largely manual process during the summer based on Smartsheets and health center staff and a few other ISU employees making calls and sending texts. When infections surged in August, the pool of about 30 contact tracers needed to expand.

"I felt tremendous support from university leadership because when the numbers spiked, they started reaching out to get us assistance. It was overwhelming, but at no point did we feel like there wasn't help on the way. Everyone pitched in, knowing that we would have support and that it would work out," Pringle said.

By the end of September, new infections had fallen sharply, and the contact tracing shifted to a new system built on the health center’s process but based in the Qualtrics platform, designed in part by Beyer and international risk manager Shaun Jamieson, a pair who also began overseeing the contact tracing team.

The system automatically texts contacts as soon as they're identified and sends the daily check-ins during quarantine, saving time. A tracer follows up by phone 24-48 hours after the initial notification text, and the system triages those calls, prioritizing contacts that didn't receive or respond to the text or indicated in a survey that they had questions.

"The Qualtrics system allows us to quickly scale up and down and have fewer contact tracers managing a greater number of cases," Jamieson said.

The automation proved useful when cases increased again and more than 1,000 students and employees were in quarantine during the last two weeks of November.

"The fact that we finished last semester in person is a testament to the fact that it worked," Parris said.

How the calls go

More than 4,000 contacts have been identified by ISU's tracing operation. An analysis during a 10-week period in the fall, after the Qualtrics system was in place, found that 98% either filled out the survey sent by text or spoke on the phone with a contact tracer, Jamieson said. Most people are responsive and appreciative.

"A very, very small number of people are recalcitrant, obstinate or rude," he said.

Contact tracing calls typically take about five minutes. Case investigation calls are much more intense, a half hour or longer and covering more emotional ground, said Vanderheyden, who took over management of the case investigation team when the system moved to Qualtrics.

"It definitely takes some skill to help somebody think through identifying contacts. We usually have them pull out their phone and think about activities they've done, classes and social events they've attended, roommates, intimate partners -- we're asking about really specific things," he said.

"For the most part, it helps to express some empathy and meet them where they're at," he said.

Jamieson said one occasional challenge is when people assume they know who has identified them as having been in close contact, which is defined as being within 6 feet of someone for 15 consecutive minutes when one of the parties isn't wearing a face covering properly.

"By design, neither the contact tracer nor the contact know who the positive case is. All the tracer has is the date of the contact," he said.

Pringle is still involved in the case investigation side of the process, helping make assignments and calling difficult-to-reach patients. She has noticed investigation calls were more difficult earlier in the pandemic when people had less COVID-19 knowledge and experience.

"There was a lot of shock, a lot of fear, a lot of misinformation. It was rough sometimes," she said.

All hands on deck

While leading the case investigation team, Vanderheyden also has day-job obligations heading up the student wellness office. That means constant multitasking and frequent night and weekend work. He said double duties have been common during the pandemic for staff across the student health and wellness unit -- which also includes the health center, student counseling and recreation services.

"The reality is, all of us are doing multiple full-time jobs the best we can. It's been an around-the-clock thing since last spring," he said. "We know it's critical to the health and well-being of our community, and the entire staff has really rallied behind that. We take a lot of pride in it, which really helps when people are tired."

Beyer and Jamieson were involved in other aspects of the university's COVID-19 response before pivoting to contact tracing, said Beyer, whose pre-pandemic role in event authorization remains busy, as well.

"Our running joke is that we have our old jobs and our new jobs and our newest jobs. I think for both of us, it's our third new role. But there's so many people who have been doing that all across campus all the time," he said.

That includes support staff, too. Parris and Pringle would often tweak the contact tracing system in late-night conversations, devising incremental improvements that they relied on the health center IT staff to implement.

"You would never hear anyone here say it's too much work to do it that way," Parris said.

Which doesn't mean that Pringle isn't looking forward to the day -- coming soon, at the start of February -- when the last bit of contact tracing texts are automated via Qualtrics, and she can leave her university cellphone on her desk at the end of the day. Until then, she's still sending texts nightly to notify people who tested positive that their isolation period is over.

Learn more about ISU’s pandemic response in a collection of stories highlighting some of the hard work, dedication and collaboration across campus.