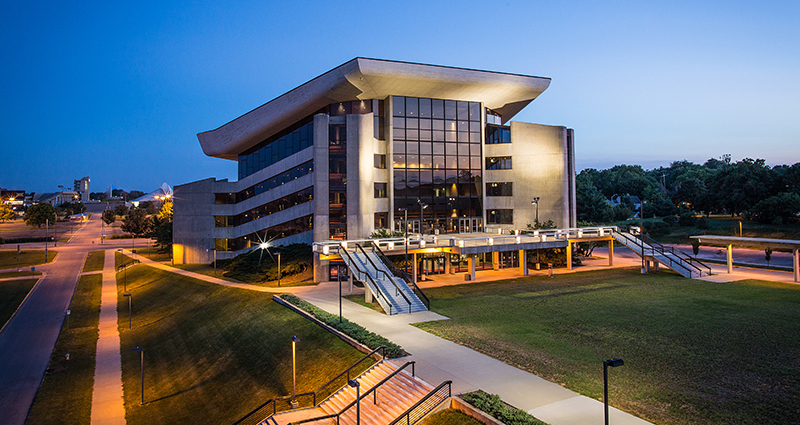 Stephens Auditorium was the first of four specialty venues at the Iowa State Center to open, in 1969. Photo by Nick Tremmel.

A sweeping plan to revitalize the Iowa State Center as an arts, culture and entertainment district anchored by Stephens Auditorium takes a first step next month when the university sends to the state Board of Regents a proposal for a pedestrian gateway bridge across University Boulevard adjacent to Jack Trice Stadium. Scheduled for completion in summer 2022 and funded through donor support, the gateway bridge will provide year-round safe passage for students, fans and community members and link the stadium to enhanced game day parking on the east side of the road.

Since August 2019, the athletics department has had oversight of all Iowa State Center facilities and was charged with spearheading an effort to reimagine the future of the complex in a way that better serves the university and Ames communities. Representatives of both serve on a planning committee. That fall, the university announced a comprehensive vision to rededicate the Iowa State Center as an arts, culture and entertainment district. In that vision, Stephens Auditorium and the entire complex are transformed.

"The Iowa State Center has served as an arts, athletics and engagement hub for the university and the Ames community since it was originally envisioned by President James Hilton," said President Wendy Wintersteen. "The center is an incredible asset, and it's time to reimagine the future of this complex. I believe this plan will mark a new era, just as Stephens Auditorium did when it was first built -- and is the best way forward as we recommit to the auditorium's important role in enriching the student experience and the entire Ames community."

Phased development of the district

Future phases for the entertainment district would involve renovated event space and improvements in the Scheman Building and Hilton Coliseum, paved lots on the east side of University Boulevard and additional parking for patrons adjacent to Fisher Theater, Stephens and Scheman. As feasibility studies move forward, plans call for a hotel and convention center south of Scheman. A final step would develop the area between Scheman and the football stadium as a multi-use arts and entertainment district. Over the long term, such a district is expected to breathe new life into Stephens Auditorium.

Athletics director Jamie Pollard lays out plan for the district in a Jan. 25 video.

"The project uses the excitement surrounding ISU athletics as a catalyst to create an arts, culture and entertainment district that ultimately will generate funding to reinvest in all of the facilities," said athletics director Jamie Pollard. "This year, the financial impact of the pandemic has been devastating and unprecedented for the entire university, including for fan- and audience-dependent programs like Cyclone athletics and the performing arts. That's why we're more committed than ever to a vision that can be a win for all of us."

An opportunity for Stephens Auditorium

Since its 1969 opening, Stephens Auditorium has been a revered university icon, but like many performing arts centers, it has faced financial challenges in recent years. Newer venues such as the Civic Center in Des Moines compete for audiences and revenue. Ticket sales cover the costs of performances, and most series shows are underwritten by generous support from loyal donors or sponsored by local companies. Rental income helps greatly, and planners are committed to researching additional revenue streams, but the facility is challenged to maintain its nearly 130,000 square feet of space. As the university celebrated Stephens' 50th anniversary last year, the facility faced an estimated $15-25 million in deferred maintenance.

Each year, Iowa State allocates nearly $1 million in operational support to Stephens. It would need to more than double that to address necessary facility improvements and deferred upkeep. A bold plan is needed to ensure the auditorium's long-term sustainability.

"As we all look to the future, it's important to reinvigorate the venues of the Iowa State Center to attract new audiences from campus and beyond for performing arts at Stephens and new conference attendees to Scheman as well as for more student uses," said Tammy Koolbeck, executive director of Stephens Auditorium.

Donald Simonson, chair of the department of music and theatre and member of the planning committee, concurred.

"Re-energizing the center will draw in students and the public, encourage them to explore the area, and promote a more cohesive vision of all that the Iowa State Center stands for and offers," he said. "One day, we may look back on the construction of the gateway bridge and see it as ushering in the next dynamic era for the Iowa State Center -- the moment it was reinvented as the heart of our Cyclone culture and spirit."

Iowa's Building of the Century

Stephens Auditorium is more than a venue where thousands of students have graduated, performed or enjoyed arts experiences. President James Hilton introduced his vision to create an educational, cultural and athletics complex for Iowa State in 1954, believing it would expand the university to become a center of culture as well as science and technology. From the seed of his idea, between 1969 and 1975, the Iowa State Center was created.

Stephens Auditorium was first of the four specialty venues to open. Alumnus Clifford Y. Stephens shared Hilton's vision and spearheaded a fundraising effort for the auditorium. He, too, believed all students should have an opportunity to develop an appreciation for the fine arts. Since the inaugural concert in 1969 by the New York Philharmonic, more than 8,000 events have been held at Stephens, including national-level performances and student-focused events such as graduations, concerts by Iowa State music ensembles, lectures and the student-run fashion show.

In 2004, the Iowa chapter of the American Institute of Architects named Stephens Auditorium the Building of the Century.