Expanded Wi-Fi a signal for students to come outside 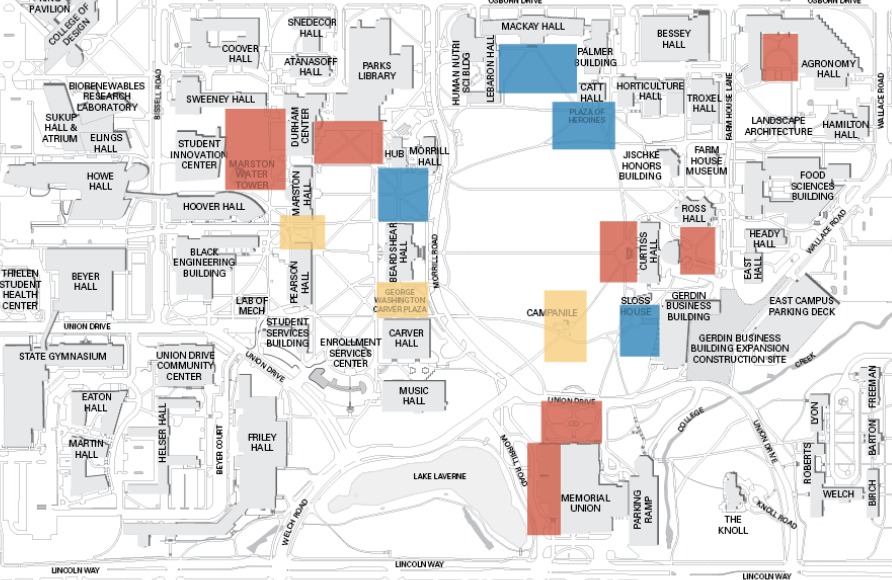 A map of central campus shows areas where Wi-Fi is being expanded outdoors.

To encourage students to use outdoor space, thinning indoor crowds that are a coronavirus transmission risk, information technology services (ITS) is extending Wi-Fi service outside in more than a dozen campus locations.

The expansion was proposed during fall planning this summer as a way to take pressure off indoor gathering spots where students access wireless internet.

"We were thinking specifically of the library and the Memorial Union, where students congregate inside especially around lunchtime," said Kori Spengler, manager of the ITS communication and collaboration team.

Areas north and west of the MU and south of Parks Library were among the first Wi-Fi zones added in an initial phase in early August that also included the Agronomy Hall courtyard, the plazas east and west of Curtiss Hall and the Marston Water Tower courtyard east of the Student Innovation Center, said Connor Kuehl, manager of the ITS physical infrastructure team.

A second phase underway is adding Wi-Fi south of The Hub, south of MacKay Hall, south of Catt Hall and west of Gerdin Business Building. Later this fall, a third phase will expand service south of Marston Hall, in the George Washington Carver Plaza south of Beardshear Hall and in the area surrounding the campanile.

Facilities planning and management's online campus map includes a filter for identifying outdoor Wi-Fi locations. Tents are being added to some of the same areas to make it more inviting for students to use outdoor space, COVID-19 response team chair Frank Peters said in an Aug. 31 virtual hall. The Eduroam, IASTATE and Guest wireless networks are available.

Watch out for trees

Delivering Wi-Fi outdoors poses some challenges, said Mike Broders, manager of the ITS network engineering team. The wireless access points, the devices that send the Wi-Fi signal, generally need to be within 300 feet of a distribution node to connect by ethernet cable. Longer distances require a fiber optic line with an independent power source.

"It's probably a little bit more involved than most people would expect. There's quite a bit involved just with determining placement and where you're going to get your most bang for the buck," he said.

Trees also are a consideration, Broders said. Foliage is a significant obstacle that will knock out a wireless signal.

"So one of the things that we really had to plan for was making sure these things aren't surrounded by trees. That's one of the beautiful things about campus, the amount of tree cover. But at the same time, for wireless coverage, it's not great," he said.

It will take 23 wireless access points to serve the 14 areas. They're built for outdoor use and are resistant to extreme temperatures and moisture, Broders said.

The project doesn't mark the first time Wi-Fi has been available outdoors on campus. There were some outdoor hot spots years ago, but they were phased out as hardware was replaced because they didn't get used much, Broders said.

So far, that's not the case with the new areas. They're getting traffic, though it's hard to determine precisely how much.

"We can see the number of clients associated with the access points, but trying to determine how long they're actually staying there is the challenge. We don't want to count those that are just walking by," Broders said.

With in-person tours on hold this semester, the utilities staff instead created two virtual options: a 50-minute presentation on campus energy, fuels and emissions and a 35-minute facilities tour.