With VR, students lead classmates on trips around the world 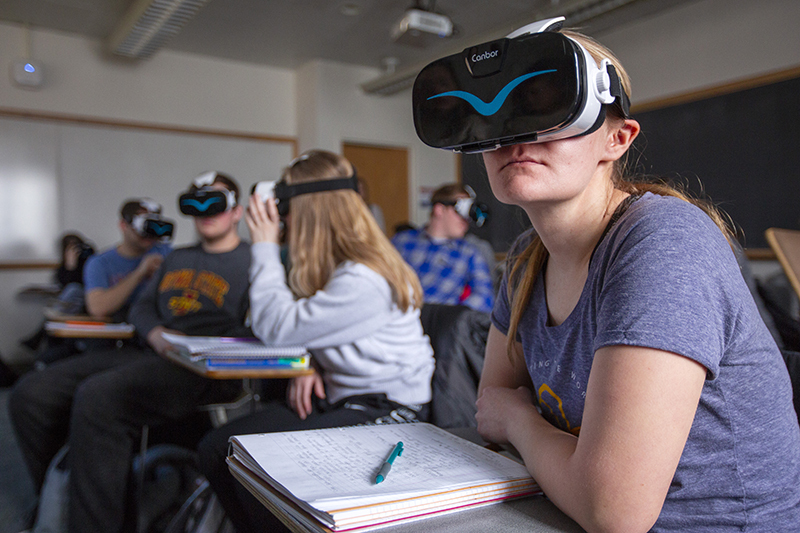 Spanish 304 student Jennifer Seth follows along as classmates lead a virtual reality tour of some notable sites in Spain. Photo by Christopher Gannon.

After his first semester teaching Spanish 304, James Nemiroff was confronted with a problem.

A good chunk of the material in Spanish for Global Professionals, which focuses on business vocabulary and intercultural competence, is a need-to-know foundation for a variety of Spanish-language countries -- social, historical, economic and political basics detailed in the course's textbook. It's important, but a potentially dry subject for lecturing.

"I found my blabbing at them for 50 minutes was a little boring," said Nemiroff, a Spanish lecturer in the world languages and cultures department. "Often, students' attention can drag when listening in a foreign language."

The solution? Group presentations on the background and issues facing a Spanish-speaking nation, a newly added project with a technological component. A piece of that presentation is a virtual reality tour each group makes, illustrating points from their report with 360-degree photos they jointly experience as a class. Instead of listening to Nemiroff talk about a nation's political history, students lead a quick tour of a few of its most instructive and interesting sites.

"I want to give them that experience of 'Yeah, I was in Spain for about five minutes,'" Nemiroff said.

Two sections of Spanish 304 last fall were Nemiroff's trial run for the VR-assisted assignment, and it went well. Student engagement was better, helping sharpen spontaneous conversation skills. Though the images are static photos, the VR tours feel more alive than a video – reinforcing active instead of passive learning and encouraging realistic speaking and listening, he said.

Nemiroff plans to research the value of using virtual spaces in teaching a second language.

"The VR environment, I think, provokes their imagination differently," he said. "They take ownership in a unique way."

Another class section is preparing VR tours this semester, with the first group presenting last week on Spain. Roughly two dozen students slipped on the headsets, which hold cell phones to display the images. As presenting students acted as tour guides, their classmates craned in various directions to explore Camp Nou, the massive stadium where soccer power FC Barcelona plays. When presenters prompted where to look with an arrow, their heads all snapped in the same direction. On a tablet the presenting group monitors, smiley faces designate where each headset is looking.

The tours are the first classroom assignment to use of the VR cart the department purchased last year. Jacob Larsen, director of the Language Studies Resource Center, saw VR used at a conference and thought it held some promise for language instruction. Some faculty showed interest, and Larsen and graduate assistant Alison Kirwen researched the technology. The gear is affordable and easy to use, given it is consumer-level headsets and cell phones -- a far cry from, say, the total immersion of the Virtual Reality Application Center's C6.

"To create a user-generated environment is a whole different level of development," Larsen said.

The VR headset cart cost about $8,000, with half of the cost covered by the department budget and half by College of Liberal Arts and Sciences student computer fee funds, Larsen said. The setup consists of 35 phones, 45 headsets and a dedicated router. The tours are created with a free Google app, Expeditions, which integrates photos created for its street view maps and user-uploaded images.

Building the tours is intuitive enough that students rarely stop by the Language Studies Resource Center for assistance, Larsen said. Simplicity is a key feature.

"The technology has to be accessible enough to not get in the way of the learning," Larsen said.

The department also purchased two 360-degree cameras to create immersive videos from its study abroad programs. Last summer, department chair Chad Gasta shot video during his trip to Valencia, Spain. This summer, additional videos are planned from the department's other programs. Viewed on the VR headsets, the videos can be a recruiting tool for study abroad or a chance for students already signed up to get a sense of what an unfamiliar place will be like.

"It's another way for them to visualize interacting with the Spanish-speaking world," Nemiroff said.