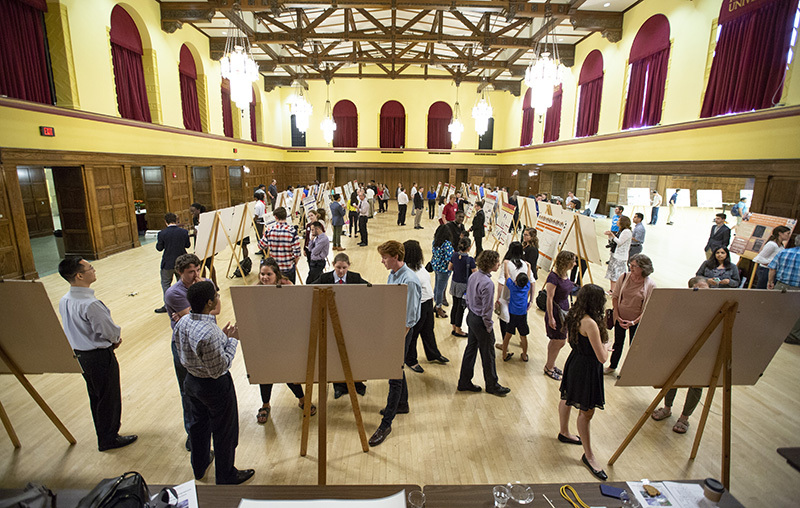 Nearly 150 undergraduates who spent the summer working on research projects presented their findings in a poster presentation symposium Aug. 1 in the Memorial Union Great Hall. In addition to ISU students, presenters included more than 100 students from other schools participating in programs such as those sponsored by the National Science Foundation's Research Experiences for Undergraduates. Photo by Christopher Gannon.

By the third week in Stephen Gilbert's summer research program for undergraduates, most students are freaking out. They're away from home, living and studying with people they just met, doing work without clear answers -- or clear questions.

"It's meant to be intense," said Gilbert, associate director of the Virtual Reality Application Center and the human computer interaction graduate program. "So far in their lives, they've been told, 'Oh, if you do this, you'll get an A. If you do that, you'll get an A.' Now it's like, 'Figure out something clever to do.' We tell the faculty involved, 'Don't go tell them what to do.' Part of research is figuring out what to do."

Introducing undergraduates to the realities of research is among the many goals of the Summer Program for Interdisciplinary Research and Education-Emerging Interface Technologies (SPIRE-EIT), Gilbert said. It's one of several similar programs that invite students from other institutions to the Iowa State campus during the summer to work with researchers on actual projects. Many of them are, like SPIRE-EIT, funded by National Science Foundation's Research Experiences for Undergraduates (REU) initiative. The undergraduates, who often have little or no background in research, are paid a stipend and live in on-campus housing.

"We really are a little like research camp," Gilbert said.

The programs drew more than 100 undergraduates from other universities to the Iowa State campus for the summer, accounting for more than two-thirds of the 146 students presenting their work at the Summer Undergraduate Research Symposium on Aug. 1, according to Svitlana Zbarska, campuswide undergraduate research program coordinator.

One of the largest and most established programs is the Science Undergraduate Laboratory Internships (SULI) program run by the U.S. Department of Energy and offered at numerous DOE sites, including the Ames Laboratory. Twenty-seven undergraduates, one-third of them Iowa State students, participated this summer in the program, which also is offered in the fall and spring.

"These research experiences are a great way to get a taste of research in a real-world environment and see if they like it," said Steve Karsjen, director of education and outreach for the Ames Laboratory. "It's just a great opportunity to impact their future."

All of the programs offer professional development workshops on topics such as planning, writing about and presenting research, applying for graduate school, interviewing and preparing a resume. Zbarska organizes a series of those workshops, and many of the programs have their own seminars, as well. Sessions on team-building and networking are common, and the programs naturally can lead to spotting or recruiting future graduate students. Research experience increasingly is expected of graduate school applicants, Zbarska said.

"Research is a must have. It's not optional. The level of competition is so high," she said.

In SPIRE-EIT's 14-year history, about a dozen students have ended up returning for graduate school, Gilbert said. The program's goal of having students of color and women each account for at least half of every year's group is in part driven by the need to diversify graduate studies.

"Our nation desperately needs more STEM, and there's a whole set of people not contributing who could be," he said.

For SPIRE-EIT's Vrinda Shroff, a junior-to-be studying computer science at California State University, East Bay, this summer helped solidify her tentative thoughts about going to graduate school. Working in a team of three on how to limit disorientation in virtual reality environments was an eye-opening experience, she said.

"Especially for me as an immigrant myself, it was a super-big opportunity to get to know so many people from so many different places and get to know how they work in a team. To learn so much from my teammates -- it was like all of everything. Emotions, learning, outcomes, research, a little bit of everything," Shroff said.

Even though they may feel lost in week three, Gilbert said most students end up thriving and making great strides by the end of their 10 weeks on campus. Students' work is often more helpful to the research projects than they, and their faculty mentors, thought it would be.

"I love the program. It's one of my favorite things I do at Iowa State. It's changing these kids' lives," Gilbert said.