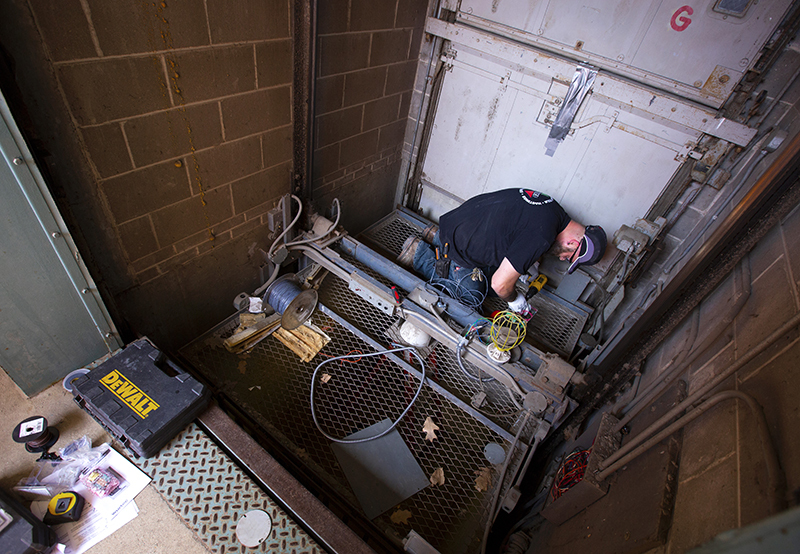 Ryan Joens of Eletech, Inc., Omaha, works atop a Gilman Hall freight elevator to install a new alarm bell, security light and telephone on Tuesday. Many elevator cars are currently receiving the upgrades on campus. Photo by Christopher Gannon.

An extensive project that began last summer will update the majority of older elevators across campus, but hopefully you'll never need the most noticeable improvements.

Crews are installing safety enhancements in about 115 elevators, work prompted by the state elevator board's 2015 adoption of new requirements for older elevators. The rules, which go into effect in May 2020, mandate for older elevators many of the safety measures required in new elevators.

A survey last summer produced a list of deficiencies to address in each of the campus elevators installed or last modernized before 2010, said Kerry Dixon, the facilities planning and management (FPM) project manager overseeing the elevator work. That's about 75 percent of campus elevators, not including those in residence halls.

"Every elevator we inspected had something," Dixon said. Some had as few as three issues, while others had as many as 45.

Many fixes are minor, such as maintenance paperwork or proper labels. The most substantial changes are adding emergency bells, lights with battery backups and phones in each elevator car, both for passengers and freight.

"After this is done, every elevator on campus will have an emergency phone that rings directly to the department of public safety," she said.

Adding mechanisms to keep elevator doors from being forced open is another major safety improvement, Dixon said. Though it's a common sight in movies, elevator doors with modern safety equipment can't be forced open without a special tool, she said.

Portions of the project that require elevators to temporarily shut down should be done by early July, Dixon said, with some minor work in mechanical rooms continuing into the fall. The project will cost nearly $3 million, not including the residence hall elevator work also occurring this summer.

All fixes should be complete well before the enforcement deadline next year, said Dixon, who sits on the state elevator board. She said Iowa State has been especially proactive in tackling the compliance issues, which if not fixed would eventually lead to a shutdown due to a lack of a state permit.

"We are ahead of most of the other major property owners in the state," she said.