Five questions with the vice president for diversity and inclusion 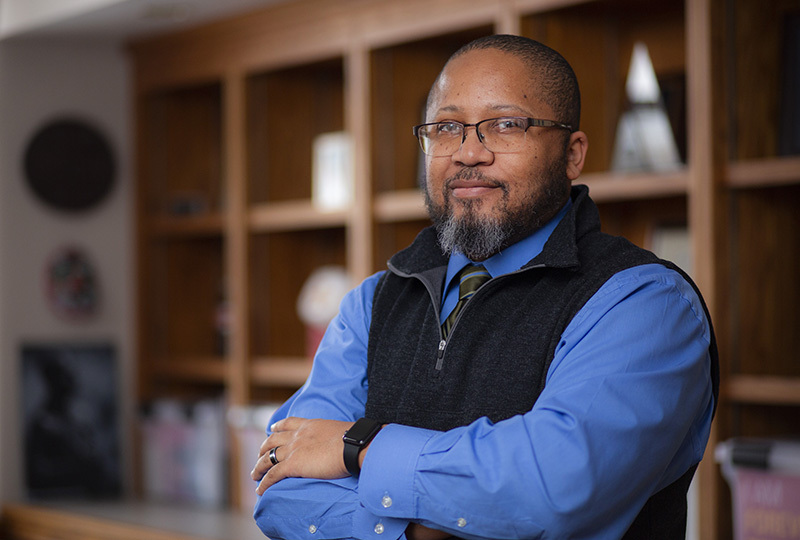 Reginald Stewart, vice president for diversity and inclusion, in his office in Beardshear Hall. Photo by Christopher Gannon.

Reginald Stewart has worked on diversity and inclusion on college campuses for 30 years, since his time in the disability services office as a San Francisco State University undergraduate. Years ago, people would sometimes ask, "Do you really still need to do diversity work?"

"Nobody asks me that anymore," said Stewart, vice president for diversity and inclusion.

While striving to make campus welcoming to all is more urgent than ever, Stewart has shown in his three years as Iowa State's first chief diversity officer how vital that work is off-campus, too. He was honored last month with the Ames Human Relations Commission's 2019 Humanitarian Award in recognition of his work on numerous initiatives with the city and area nonprofits, including a four-week program teaching underrepresented residents about municipal government and a symposium for local business leaders on building inclusive organizations.

In a recent interview, Stewart talked about his experience and approach as the university's inaugural diversity executive -- a position he also was the first to hold at the University of Nevada, Reno.

What have you done here that you're most proud of?

If I had to quantify what I'm most satisfied with, it'd be successfully installing this position. It's a very high-level job that many campuses have had for years. But with it being new at Iowa State, there's a lot of social capital to be built. There's a lot of nurturing of relationships. There's a lot of building trust so that when you start to install systems, they can be installed really fluidly. Everyone has their own expectations for what a role will be if the role is not defined. So you're meeting people where they're at and talking through and explaining how this job will maybe do parts of what they expect, but there's a bigger strategic operation at play. Often times, their expectations are echoed or mirrored in other places, and that gives you some concrete building blocks. When I first got to campus, people said the university administration was too slow to respond to incidents. That was a big, resonating message. We realized you're not going to be able to increase your response time unless you install an accelerator. So we built the campus climate response team. We hear less of that critique now, and it's because we built an entire mechanism comprised of invested stakeholders who focus on being responsive.

Why is trust so important to the work your office does?

The topics we discuss are very sensitive. They're very polarizing. They're things many people have been socialized not to talk about. So the trust has to come from a person who's going to lead you on a conversation that could be uncomfortable, that you feel like you don't have enough information to weigh in on. I always say when I'm giving talks on campus, "You are an expert in your own experience." You get to bring that to this conversation. The objective here is not to leave thinking we're in lockstep. The objective is to say, "Here's the issue we need to work on. This is the problem we need to figure out. And we need both of us and our worldviews to fix this." I think coming from that direction gives people a level of trust. "Oh, OK, this guy's not going to be preachy. He's not going to be condescending. He's not going to beat me up for what I don't know." But understand: Your normal and my normal are not mutually exclusive. Your identity is not the default setting for how people should live. I think if you can get there, that level of trust builds on itself.

Was adding more staff at the top of your priorities?

There are really two approaches you can use to institutional diversity and inclusion. There's advocacy work and compliance work. We needed to focus on compliance first. Nationally, when people talk about what's happening to them -- whether it's harassment, discrimination, sexual assault -- what you often hear is some version of, "I'm displeased with the institution's response to what happened." That's part of your compliance work. It was important that we place focus on building a responsive team. Your advocacy work gets out in front and teaches people how to build a better climate so, hopefully, we can do less responding and more engagement. We need to broaden the umbrella of those doing the teaching, the training, the work to model the appropriate behaviors and the constructive way to engage with people to create inclusive environments and workplaces. The next three years is really about increasing advocacy. Fortunately, we have been able to build a framework for enterprise-wide advocacy work. What we did with our Latinx affairs and with our LGBTQIA affairs has resulted in stronger collaborations among faculty, staff, students and community members. I would like to be able to replicate that success with work in Pan-African affairs, our work with Asian-American and Pacific Islander initiatives, and our work with Native American/American Indian advocacy and support efforts. Those are three priority advocacy areas that I'd like to be able to set people about doing constructive work on.

How important is it for a person in your role to be involved in the community, to be a voice for diversity not just on campus?

Our role as a land-grant university is to provide this beacon of leadership, research, scholarship and teaching, and share it with the community. So why would that stop with diversity and inclusion? Why would you only keep this forward progress limited to campus? It's counterintuitive to what a land-grant is about. And moreover, the people who work and go to school here don't just stay on central campus. They live and work in the community. You're only having half the conversation if you're only talking about their campus experience. The VPDI role should be a conduit of inclusion from campus to the community. You're working with community agencies and city managers and mayors and chambers of commerce to get everyone -- whether that's industry, whether that's visitors, you name it -- talking about creating a more inclusive world to live in. We get to lead that conversation. Not every entity has the opportunity to hire an executive-level diversity strategist. And in reality, they don't all need to if your public university is willing to lend its time and energy.

In what ways are things getting better at Iowa State?

At Iowa State, people don't shy away when you reach out and say, "Hey, there's an initiative we want to work on, I need you." The state of Iowa has a strong record of being progressive, and considering the very homogeneous population, it's impressive. I think Iowa State mirrors that. Not in total -- we definitely have our incidents where people just want to be disruptive. But I see Iowa State folks invested in this institution. They don't want things to mar the pride they feel about being a Cyclone. If it means investing with both hands in diversity and inclusion, they're willing to do it because they hold such an affinity for this institution. I think that's a wonderful place to be.