Student works on growing food in space for NASA

Editor's note: This story was written fall semester as an assignment in Journalism 347, Science Communication. Inside Iowa State periodically publishes student stories that are relevant to our campus audience. 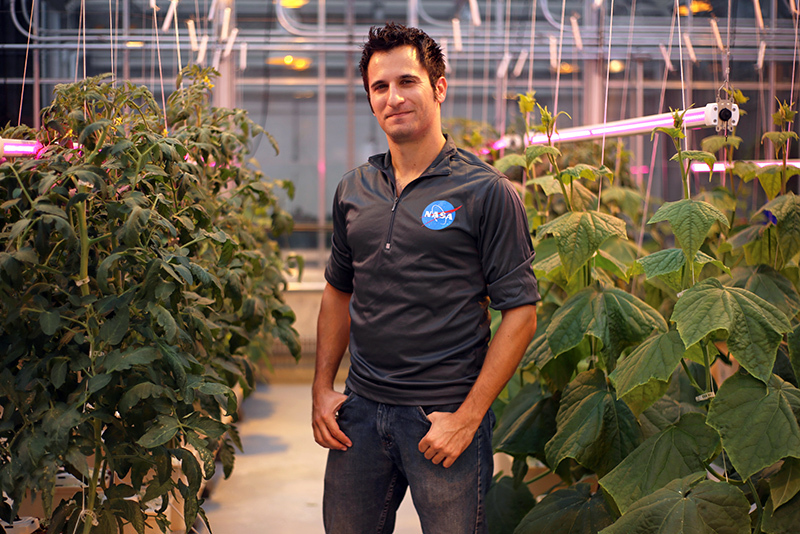 Using his background in technology and horticulture, doctoral student Alex Litvin interned with NASA last summer to study how to grow plants in space.

Litvin worked for 10 weeks in NASA's Greenwerks lab at Kennedy Space Center, Florida, with a group of scientists who look at ways to grow salad-type plants in space as part of the Vegetable Production System -- or "Veggie."

The Veggie team's efforts are part of a larger NASA project, Deep Space Gateway, which is exploring ways to extend space travel by having a station on the moon astronauts could stop at on longer missions, possibly to other planets.

Litvin said NASA acknowledges there are a few problems that need to be solved before they can begin any sort of planetary travel or space colonization. Finding a way to provide enough food for astronauts is one of them.

"We realize how hard it is to actually go and live in space," Litvin said.

Growing food in space would be more economical for deep space travel than taking all of the food needed for the entire mission.

"Every little bit of weight costs a lot of money," Litvin said. "If you think about space flight, the amount of money you would need to make a rocket for the amount of food you need to survive -- it's not reasonable."

Litvin grew up in Silicon Valley area of California, where many students in his high school were gearing up to become programmers and work in tech fields. He was certified as a computer technician, taught the basics of electrical engineering by his father and learned programming. Afraid of a cubicle life, Litvin earned his bachelor's degree in wine and viticulture. He worked in that industry for a few years, got pushed toward the sales side and decided he missed the science. He left California for the University of Georgia to get a master's degree in horticulture. He's working toward a Ph.D. in horticulture at Iowa State, with a focus on automated growing methods, including plants grown under LED lights. He works with assistant professor Christopher Currey.

"When I was younger, I really wanted to get away from technology. And then there's a point you realize, in today's world, everyone needs to know something about technology," Litvin said.

His tech knowledge and interest in horticulture led him to automation; exactly what NASA is looking for with its Veggie and Deep Space Gateway projects. NASA's goal, he said, is to grow a plant from seed to harvest through an automated growth system at a station in space so the plant will be ready to harvest when an astronaut arrives.

"I'm just like anyone else. I'll forget to water my plants so I'll let my plants die," Litvin said. "But, I'm really good at taking an hour or so out of my day, building a circuit, putting sensors into a pot and a faucet spigot and just having it water itself." 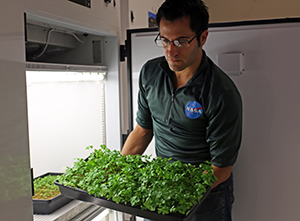 Hydroponics is growing plants without soil, which could be good for space travel and may be an answer for growing in a microgravity environment like that found in space.

"It's a very low commitment for materials because you're not chugging along soil into your system," Litvin said. "You just have tubs that you can immediately grow the plants in with the water they need. Water is continuously recycled in space. Taking a seed is not as much work."

Litvin specializes in controlled environment agriculture (CEA), an area where his work and NASA's overlaps. With CEA, sensor feedback allows horticulturalists to observe and control specific aspects of plant growth such as humidity and light. This data allows them to speed up or slow down the rate of growth by changing a plant's watering plan. Controlling every aspect of the process allows NASA scientists to compare how plants grow differently in microgravity under varying amounts of light and humidity.

This kind of controlled agriculture could be beneficial for growing plants on Earth, too. A controlled environment allows a scientist to observe how a plant will react under certain conditions such as climate change or drought, and then try to find a better way to grow the plant in predicted conditions.

Litvin said the biggest challenge with growing plants in space is how to water them. In space, water adheres to whatever surface it is near, and coheres to other water molecules. When water adheres to a plant, it prevents the plant from getting enough air, basically suffocating it.

NASA is exploring a few hydroponic tactics to solve this problem, for example, 3-D printed substrates. The plants grow in these substrates, designed so the roots can burrow and plants have something to latch onto. Scientists can monitor the amount of water being fed into the substrates.

NASA also is looking at a material called hydrogel. Similar to a baby diaper, it absorbs liquid and then releases it back to the plant when needed

NASA has tried aeroponics -- growing a plant without any soil or container. The plants are suspended so the roots dangle and are sprayed with the water and nutrients the plant needs. However, water adhesion can coat the root and suffocate it. The solution is to use sensors to monitor and try to control the amount of water in the air.

More work to be done

When he's done at ISU, Litvin said he hopes to return to NASA. His goal is to continue working with automation and explore how efficient agricultural approaches can contribute to society.

About the writer: Jessie Darland is a senior from Cedar Rapids. She'll graduate in December with degrees in journalism and international studies and a minor in political science. She's currently in Portland for a 15-week internship at the twice-weekly Portland Tribune. At Iowa State, she worked on the staffs of the Iowa State Daily, Ethos and Veritas. Her post-December goal is to return to the West to work as an environmental writer and photojournalist.

First bell cast for carillon model
First phase of CyRide changes is coming May 5
How student evaluations are used, from three perspectives
ISU is working to comply with new EU data privacy law
Student works on growing food in space for NASA

Free activites lead up to April 14 student-led production of The Fashion Show.