President Steven Leath advocated a performance-based state funding model that rewards universities for educating Iowa residents and moving all students through degree programs. Speaking March 13 to a Board of Regents-appointed task force studying a performance-based model for distributing state higher education funding, Leath said a new model should encourage the universities to meet future job demands by expanding access to a college education and serving more underrepresented students, for example, minority students and those whose family incomes qualify them for federal Pell grants.

Leath also said the model should reward innovation and the specific state economic development missions of the three universities. He said he favors including the entire general education appropriation – about $479 million total this year, $174 million to Iowa State – in any model developed.

Former regent David Miles, who chairs the task force, said the intent is that, in five to 10 years, "there's a better link between the board's priorities and state funds going to the three universities."

Iowa's traditional formula, dating back to the 1940s, divided the state appropriation on roughly a 40 percent/40 percent/20 percent (Iowa State/Iowa/Northern Iowa) split. But, over time, that breakout has meandered. This year's $479 million general education appropriation is divided on approximately a 36 percent/46 percent/18 percent split, mirroring at least the last decade.

Leath, who recommended that as much as 60 percent of the state appropriation follow Iowa resident students, said this year's enrollments and state allocations show little connection between the two:

Leath said a new model should be more accountable to state taxpayers. Currently, he said, Iowa State receives 63 cents and UNI 60 cents for every general education dollar Iowa receives in a distribution formula based on history and tradition but not achievement.

While the presidents agreed on some possible metrics – student progress toward a degree measured by credits completed, not simply retention, was one – they defended metrics specific to their schools' missions as well. The possibility of common metrics and university-specific metrics is one of the many questions the task force faces.

Leath asked for a metric that inspires expanded access for Iowans, particularly minority, low-income, community college transfer or first-generation college students. Iowa State educates the most Iowa residents each year, and he encouraged a metric based on a three-year rolling average of total in-state student FTEs (undergraduate, graduate and professional).

Mason asked for metrics that accommodate higher costs of instruction and reward quality, for example the quality of entering students, as measured by admissions standards, or the quality of academic programs as recognized by various ranking bodies or publications. She said nearly a third of Iowa students are graduate or professional students who, upon graduation, contribute to the state's "human infrastructure." She also proposed metrics that reward the universities for placing their graduates in Iowa jobs and for raising private scholarships that lower attendance costs for students.

Mason said focusing too much on Iowa residents "penalizes us for bringing in new blood to Iowa" and puts the three universities "in competition for a flat demographic."

Noting that 91 percent of UNI students come from within the state, Ruud said he favors a model in which at least 75 percent of the funds are tied to enrollment. He asked foremost for a redistribution of state funds "to level the playing field" before any performance measures are applied. Ruud said UNI has a "different kind of student" than Iowa or Iowa State and that faculty productivity is measured differently at his university.

Ruud experienced performance-based funding at his previous job in Pennsylvania. He said that state tried many different metrics over time, trying to find the right combination that reflected priorities.

"The problem is that our [Iowa] funding model is based on nothing. The missions of the schools are so different and over time, the schools have matured in different directions," Ruud said.

He proposed tying a small amount – perhaps 8 to 10 percent -- of the state funds to performance initially, and increasing that in future years.

The task force's next meeting is scheduled for April 17. Miles said he still expects to present the group's recommendation to the regents at the board's June meeting, as initially planned. 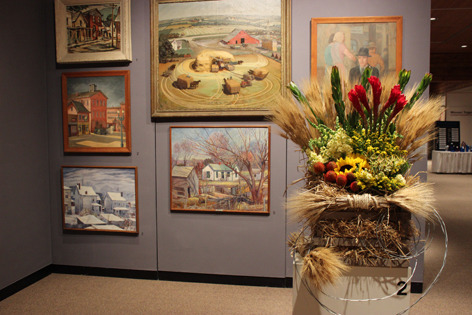 See flowers as art during "Brunnier in Bloom" March 28-30 at the Brunnier Art Museum.

Faculty and staff who work with ISU students are invited to the Student Success Summit on April 3.