After many years of cuts, Leath said he was pleased with last year's increase in the recurring budget line and is "quite confident we'll see increases in our general appropriations again this year.

"We're still not where we were three or four years ago, but if we're trending up, I think it says a number of things. It says Iowa is still committed to funding higher education. And it says that they are looking favorably on what we're doing."

"We had very modest increases last year, which is better than no increase. We're looking at a salary increase again this year, which again is good. It will not be as large as I hoped for or you hoped for, but hopefully over time we can raise those numbers."

"We were spending a lot of money on federal relations. We have hired one person now to do federal relations for us, a former student body president, and Sophia [Magill] is doing a good job.

Leath said he was proud of the record enrollment of students, but recognizes the burden it puts on faculty.

"We've grown almost 25 percent in student numbers over the last 10 years and we essentially didn't grow at all in our faculty numbers. There comes a limit to how much we can ask individuals to do with bigger class sizes and other demands and maintain quality and maintain morale."

Leath said he and senior vice president and provost Jonathan Wickert have committed to hiring 200 more faculty within a couple of years.

"Athletics has been a bright spot," Leath said, pointing to athletic successes in various sports. "But I want to take the opportunity to say we're not going to be one of those schools where the tail wags the dog.

"I think we've done a good job with athletics here and Jamie [athletics director Pollard] has got the culture of the athletics group right. They want to win. They want to win, though, in a way I think we can be proud of. If you look at our academic success, it's really tremendous among the student-athletes. We put a lot of demand on student-athletes. But they're doing better than just about any other group in the country in terms of academic success."

"Coach [Fred] Hoiberg was the first to agree to that new kind of contract. It set a model. We just did Christy Johnson-Lynch's that way, too.

"When we first brought it up, the agents told us, 'We don't do contracts that way,' and I told them, 'Well, we don't do them the old way anymore, either.'"

Leath mentioned a couple of initiatives that are under way -- one to enhance institutional excellence and another, to build a collaborative science culture.

A committee and several subcommittees are working on the first initiative, which involves such goals as increasing Ph.D. enrollment and national recognition for faculty.

"I'll be challenging the committee next time we meet to give me some specific examples of what we can do to enhance the arts and humanities faculty," he said.

Many initiatives involving the National Academy of Sciences, big grant programs or private funding from companies tend to be in the ag sciences/engineering sides of the campus rather than arts and humanities, Leath said. He called upon faculty to provide some ideas on how to help move arts and humanities forward.

The second initiative, a large interdisciplinary research initiative, will provide funding to three teams developing large-scale research proposals. Leath said he was pleased at the "huge number" of faculty members represented on the 14 proposals.

"Some of these proposals had faculty in engineering, the sciences and humanities all in the same proposal."

"We also have a number of smaller proposals we want to give, more as seed grants to help foster innovation and entrepreneurship. I'm a firm believer that a lot of the big problems in society that are left are the complex ones that are solved by multidisciplinary approaches."

Leath pointed to recent success in raising funds for scholarships.

"In an effort to hold down tuition costs, we've got this kind of agreement with the legislature and the regents that if we can raise $150 million in scholarship money in five years that they will help provide additional funding for need-based student aid," he said.

"Since July when we started this, we've already raised $39 million of $150 million. So if we have a $30 million a year goal, we're way ahead of schedule. We will hopefully have some leverage to put on folks to show that we as a university did our part in raising scholarship money."

MOOCs and other online learning

In response to a question about MOOCs (massive open online courses) and other online education, Leath said he and administrators are paying attention to the literature, going to sessions and talking with a "flagships group" started by Bill Powers, president of the University of Texas, Austin, about some collaborations.

"I think we have to be very careful not to let people outside this campus drive our priorities in education delivery systems," he said.

"Over the next year or so, we'll probably have a better idea of where we'd like to see it go at the top level, " Leath added. "This is largely faculty-driven, and what might be an acceptable approach in one department and one discipline does not fit well in some other disciplines."

"As administrators we have to be careful not to manage this from the top down, but more set the philosophical stage. I think you'll find we're still going to have a strong residential experience. We'll be supportive of blended learning and some online. We'll be real supportive of online programs or degrees past the bachelor's level. I don't anticipate them at the bachelor's level. And you'll see more coordinated development of the bigger classes than just taking one off the shelf, so to speak."

Asked for his "take home" on the Harkin Institute, Leath offered three lessons learned during the prolonged controversy over the institute. 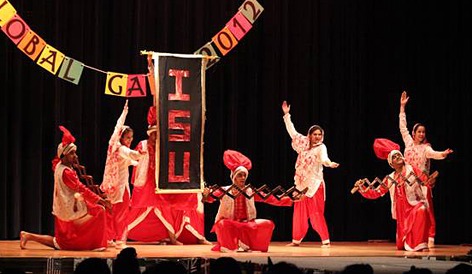