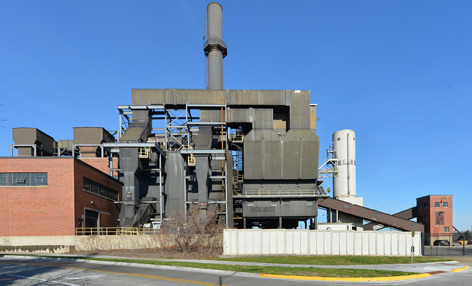 The structures and ash handling equipment to the right of the large stack will be demolished to create space on the east side of the power plant for a building that would house three natural gas-powered boilers. Photo by Bob Elbert.

If the state Board of Regents signs off on the plans next week, Iowa State will replace three of its five coal-powered boilers with natural gas boilers, effectively reducing the university's carbon footprint by 12 percent.

ISU director for utilities services Jeff Witt said the project accomplishes two objectives. It allows the university to replace boilers that are at or just beyond their expected service life (35-40 years), and it will put Iowa State in compliance with new emissions regulations proposed by the U.S. Environmental Protection Agency. (Congress has not yet approved final revisions.)

As proposed, the estimated $38 million project would be phased over three years in order to maintain normal operations at the power plant. The new boilers would go online in early fall 2015 and the remaining two coal-burning boilers would be retrofitted with an air pollution control system, also to comply with EPA regulations.

The natural gas boilers will connect to existing steam, water and electrical systems in the power plant and be used to produce steam (heat), electricity and chilled water (cooling) for the campus.

The project will be funded by utility revenue bonds, which are repaid through campus utility rates. Similar bonds sold in 1986 to pay for two coal boilers are about to be retired, so the net impact on utility rates for campus users will be minimal, Witt said.

The combination of coal- and natural gas-powered boilers will give the university flexibility to respond to market fluctuations in the future, he noted. Under normal campus energy demands, Iowa State operates three boilers. When the weather is extremely cold or when the university is producing all of its own electricity (rather than purchasing some), four boilers are in use.

While natural gas burns cleaner, its price is less stable than coal. New drilling techniques make it easier to access vast underground supplies of natural gas, which helps to bring down the price.

"We will look at pricing, and decide what to use on a monthly basis," Witt said. "We don't foresee a change from running three boilers most of the time, but it would be rare to go with no coal boilers."

So Iowa State's coal piles aren't going away, but the one east of Haber Road will be noticeably smaller. Witt estimates that coal use, currently about 135,000 tons per year, will drop by more than a third – or 48,000 tons annually. Fewer coal-fired boilers also will reduce the amount of ash byproduct the university has to dispose of by about 4,000 tons annually. And many power plant air emissions – sulfur dioxide, nitrogen oxide, mercury, carbon dioxide, for example -- will be dramatically clipped.

If the project receives board approval, two coal boilers that will be retired would be converted to natural gas temporarily next spring. The coal and ash handling equipment and structures on the east side of the power plant for those boilers would be demolished by the end of 2013 and construction of a building to house the three new boilers would begin in the spring of 2014. 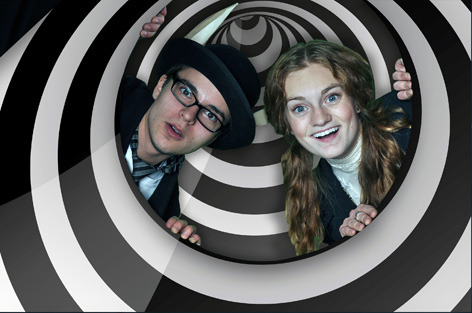