Reducing the impact of insects and viruses on food security 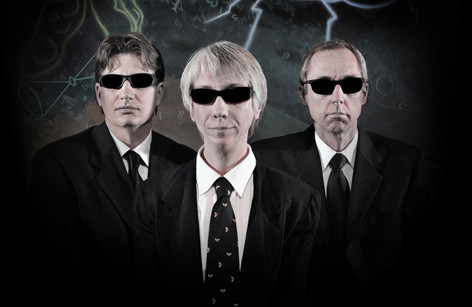 The Virus Insect Interactions group is developing solutions to reduce the impact of insects and viruses on food security for sustainable production of vegetables, fruits and farmed shrimp.         (l-r) Group members Matt O'Neal, Bryony Bonning and Allen Miller give a nod to Men In Black. Photo illustration by Bob Elbert.

Walk into an Iowa soybean field in June and listen. The sun is warm, the humidity is tolerable and it's quiet. But beneath the knee-high vegetative canopy, the serenity slips away. Soybean aphids, progeny of accidental escapees from Asia, are tapped into the plant's succulent stems, sucking in sugar-rich juices like poolside vacationers sipping Planter's Punch.

In 2000, the soybean aphid invasion was detected in North America. Since then, outbreaks of this invasive species have become commonplace, threatening U.S. soybean production -- a crop valued at more than $40 billion in 2011. Aphid outbreaks are inconsistent and unpredictable, but they continually threaten food security worldwide because of the plant diseases they spread.

Soybean aphids feed by piercing a plant's phloem, the vein-like sap transport system plants use for circulating nutrients to their near and distant parts. Feeding sessions rob the plant of the nutrients it needs to grow.

Additionally, every time an aphid taps a fresh phloem tube, viruses flow through the insect's probing needle-like mouth that draws sap as readily as it releases aphid backwash.

"Aphids are nature's flying dirty hypodermic needles," said Matt O'Neal, associate professor of entomology. "They will probe a plant lightly to see if they can survive on it and right there they can infect a plant and pick up new viruses."

Nearly 24 million acres of soybeans are grown in Iowa, Illinois, Michigan and Ohio, and mitigating aphid-related yield losses cost growers an estimated $1.6 billion over the past decade. Iowa soybean farmers alone spend close to $60 million each year to this end. Most of this money is spent on products called Warrior, Mustang Max, Baythroid or Lorsban and the fossil fuel used to spray these products on the crops. These topical broad-spectrum insecticides kill insects by paralyzing their nervous system. They are not target-specific so beneficial insects such as pollinators and natural predators of the aphid also die.

Pollinators are important. The U.S. Department of Agriculture has reported that annual honeybee pollination is responsible for $15 billion in added crop value. The honeybee and several hundred other bee species are native to North America. In 2011, O'Neal identified about 20 species living in central Iowa soybean fields. These native bees contribute about $3 billion per year to crop pollination, he said.

Insecticides carry a warning label stating time-of-day limits for application specifically to protect bees during their peak activity hours. To its credit, Iowa requires commercial applicators to steer clear of apiaries within a mile of pesticide application, and beekeepers must register with the state for this consideration.Nonetheless, environmental and human health impacts from insecticides remain unanswered. And, if the insecticide does not kill all the aphids, they simply move to neighboring fields, spreading the problem.

A team and a model to answer the threat

Bryony Bonning, professor of entomology, and Allen Miller, a molecular virologist and professor of plant pathology, have been developing a way for plants to resist both aphids and viruses to give plants and farmers a biology-driven insurance policy to protect against insect infestations and viral outbreaks.

Bonning serves as principal investigator to an interdisciplinary team called the Virus Insect Interactions (VII) group that includes Miller and O'Neal. By attracting outside funding, VII is working to become a nationally recognized center for solving emerging threats to cropping systems.

Fifteen years in the making, Bonning and Miller's newly developed model plant expresses a viral coat protein fused to a toxin (from an Australian spider) in phloem cells. The plant uses the naturally customized coat protein like an address label and escort all in one to deliver the toxin to an aphid's gut as the insect sips phloem sap. Thus, the toxin and its courier hit only the target phloem feeder.

There are some 500 species of aphid native to North America and several thousand throughout the world, so successful strategies for controlling the soybean aphid will help efforts to control other aphid species and the viruses they spread.

"You can never really go to sleep on one method because insects are constantly evolving resistance," O'Neal said.

If the pest management methods being developed can be applied to other invasive species that attack Iowa, VII will have plenty of room for sequels and franchise opportunities.

The Iowa Special Olympics Summer Games return to campus May 17-19. Events will impact roads and parking lots near sports venues.

Reminder: Registrar evaluation forms due May 14
Iowa State will serve as hub for statewide STEM efforts