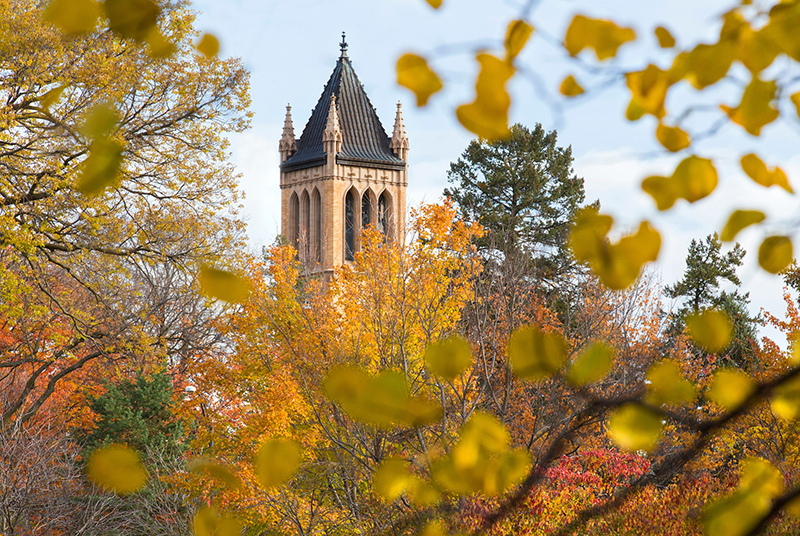 The campanile is encompassed by Iowa fall colors this week. Photo by Christopher Gannon.

Plan ahead for partial closure

Employees once again can opt to take advantage of a partial closure during winter break. By using three days of paid or unpaid leave Dec. 27-29, in tandem with weekends and university holidays, faculty and staff can enjoy 10 consecutive days off, Dec. 23-Jan. 1.

Critical and essential services will continue at reduced levels, similar to weekend operations. Darr and Gregory asked administrators to work with staff to "determine operating schedules that will enable staff to take liberal leave and reduce energy costs."

Faculty and staff are not required to take leave during the partial closure. Paid and unpaid leave options are available for those who choose to utilize the extended break. Merit employees are covered by their collective bargaining agreement with the state.

University human resources (UHR) offers a set of frequently asked questions to assist employees and supervisors in planning reduced hours. Other policies and resources include:

To participate in the partial closure, departments and units should plan to: 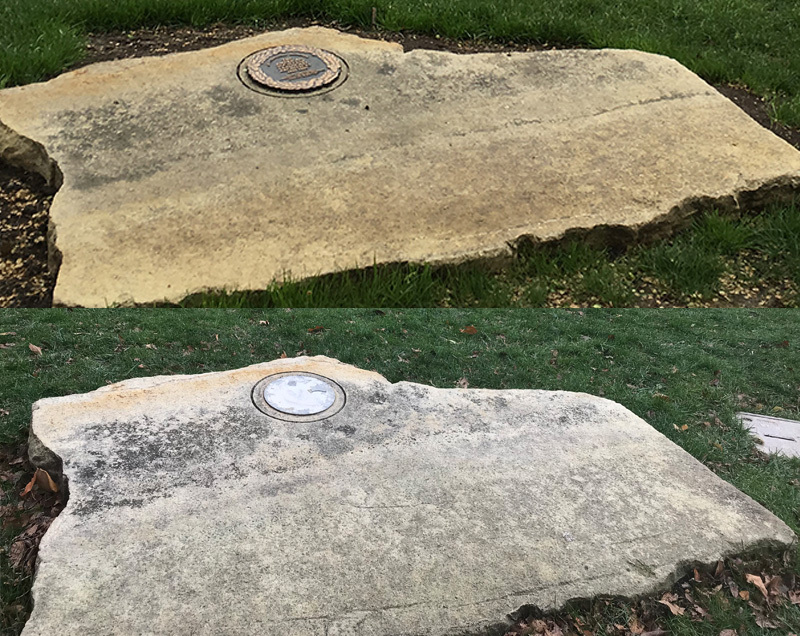 Another tool for cybersecurity

In this digital age, experts recommend another layer of security to protect personal identities and information. Multifactor authentication (MFA) is another tool that can be used in the fight against cybercrime.

MFA adds another step to the login process, such as a single-use security code texted to the user. It is becoming more common with web-based services, such as online banking, and recommended by tech giants like Google and Facebook.

"It's easy for anyone who guesses or steals your password to access your electronic workspaces," Dugan said. "Things will get considerably tougher [for thieves] when MFA becomes standard operating procedure for accessing web-based applications."

The Okta identity management platform selected by Iowa State may use MFA for its portal/dashboard that gives users one-click access to their web-based programs and applications without additional logins. Voluntary Okta enrollment is expected to start in November, with full implementation sometime next spring.

MFA provides another line of defense against cyberattacks -- from the thousands of daily attempts targeting university systems to individual users who fall prey to phishing attempts.

"Compromised accounts are time-consuming to fix and potentially dangerous," Dugan said. "In addition to resetting passwords, IT staff must ensure that university systems have not been damaged or jeopardized."

Opportunities for a broader campus audience is one intent behind changes to the former Women's and Diversity Grants Program made in the last year. The newly named Inclusion Initiatives Grant Program, which moved from the provost's office to the office of diversity and inclusion last winter, will award up to $5,000 for innovative proposals that promote an inclusive and engaged community and positively impact the university. Proposals also will be reviewed for how well they align with existing principles and guidelines for diversity and inclusion. Total available funding remains at about $50,000, and all faculty and staff are welcome to submit proposals.

"We really want to find projects and ideas that are creative and collaborative but may not have an obvious niche or home at Iowa State," said Nicci Port, project director in LGBTQ+ affairs in the office of diversity and inclusion. "Anyone with a good idea is welcome, even if they need help developing their idea before they apply."

She said a lack of experience with preparing grant proposals shouldn't undermine a great concept.

The application deadline is March 1, 2018, for a project window of Aug. 1-June 1, 2019. Grant recipients will be notified by May 1. In addition to an expanded scope for funded projects, Port said the grants program has been tweaked to remove hurdles and provide more structure and assistance to applicants. Key changes are:

Questions about the grant program may be directed to inclusioninitiatives@iastate.edu, or Port, 294-0608. 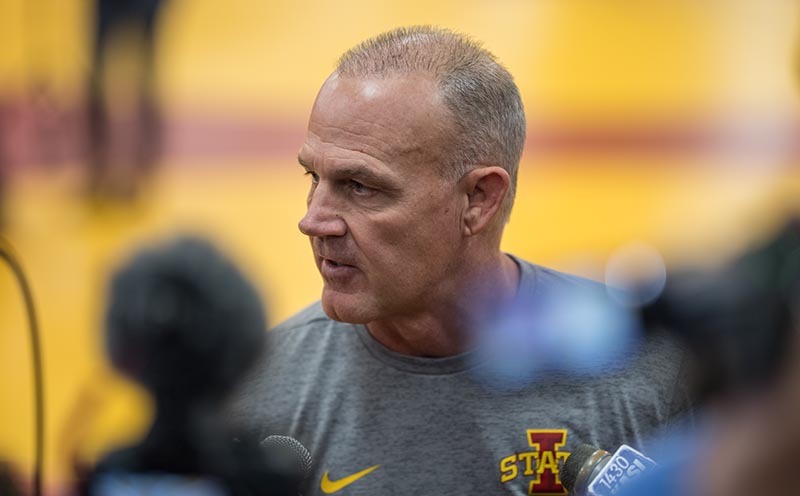 First readings of revisions to two existing university policies were introduced at the Nov. 1 Professional and Scientific Council meeting, including an expansion of who qualifies to receive donated paid leave.

Here's a brief look at the proposed changes for each policy.

Aaron Fultz, chair of the policies and procedures committee, said the committee recommends endorsing both policies, with the proposed following changes:

Council members will hear the final reading of the draft policies at their Dec. 7 meeting. 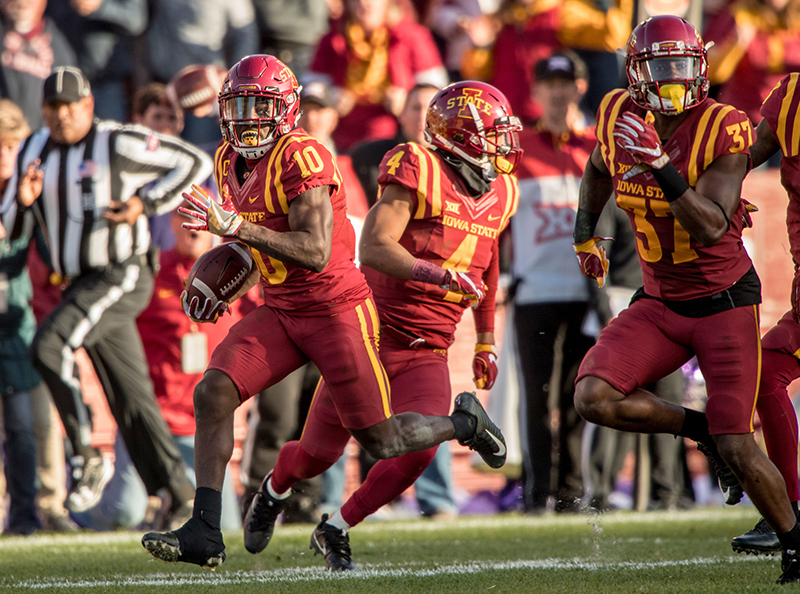 One of the highlights of Iowa State's upset win over No. 4 TCU Oct. 28 at Jack Trice Stadium was junior Brian Peavy's goal-line interception and return for 70 yards (pictured) to shut down a Horned Frogs' third-quarter drive.

The Cyclone football team went 4-0 in October, all against Big 12 Conference opponents, and broke into multiple national rankings: No. 16 in the USA Today coaches poll, No. 14 in the Associated Press sportswriters poll and No. 15 in the 4-year-old College Football Playoff rankings, the list that determines which four teams enter a playoff series for the collegiate national title among NCAA Division I schools.

The Cyclones' season continues this weekend in Morgantown, West Virginia, where head coach Matt Campbell's team will battle another conference foe, the Mountaineers. Kickoff is set for 2:30 p.m.

Written in 1934 by Lillian Hellman, this adult play chronicles the story of two women who run a boarding school for girls. A troubled student spreads a rumor that the women are having a lesbian affair, which results in scandal and tragedy.

Though written more than 80 years ago, director Brad Dell said "The Children's Hour" should sound an alarm in our contemporary world about the effects of "alternative facts" and "fake news."

"Ultimately, though, this play is also a plea for radical empathy, asking why can't we allow ourselves to understand and share in one another's feelings? Why must we be so quick to judge, label and shun?" Dell said.

The play features 15 student actors. Students also designed the scenes and costumes, and implemented dramaturgy, which, in part, is the practice of researching the play's context to the point of understanding the writer's intention and communicating that to the actors and director.

Four Iowa State students who served our nation and paid the ultimate sacrifice will be honored during the Gold Star Hall Ceremony Nov. 6 (3:15 p.m., Memorial Union Great Hall). The program is free and open to the public.

Speaking at this year's ceremony are senior vice president and provost Jonathan Wickert, student veteran Derek Zobler, and professor of military service and tactics Lt. Col. Ethan Dial. Following a narrative about each of the honored men, a representative from the Iowa State Veterans Center will present family members or friends with a commemorative coin. "Taps," performed by ISU students, will conclude the program.