From hotel room to student residence 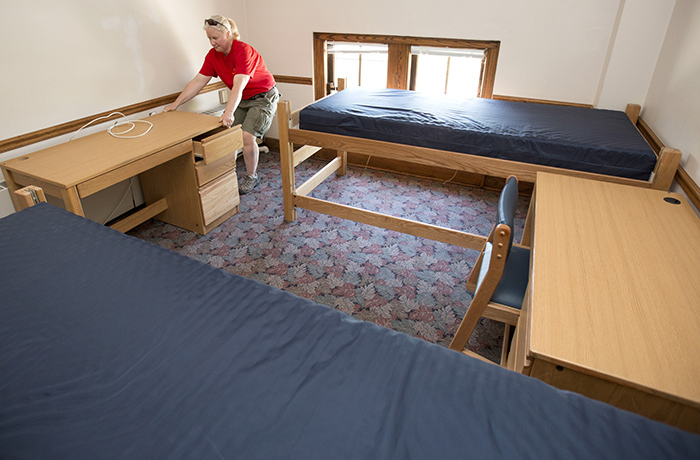 Jennifer Finnestad, who works in the residence department's purchasing unit, slides new furniture into place on the sixth floor of the Memorial Union earlier this week. The former Hotel Memorial Union closed on July 1. Beginning next month, the top three floors of the iconic building will house 70+ students with campus housing contracts. MU residents may move in as early as Aug. 13, in order to minimize congestion around the building during Destination Iowa State back-to-school events Aug. 18-20.

Consultant is next step in P&S pay structure review

"This is a big deal and we're really excited about it," Mallarino Houghton said. "Over the last year or so, we've been doing an evaluation of the opportunities and 'pain points' in relation to classification and compensation. What does it mean to be a P&S employee at Iowa State, and how does the definition -- or lack thereof -- of your job and what you do here help you feel engaged and part of this university?"

Mallarino Houghton said that "everything is on the table" in the review of the system that was implemented in 1993. In addition to modernizing the system, some specific goals of the review are to better define and establish:

"We want to make sure it's agile and it grows with us," Mallarino Houghton said. "It's important that we address this from a bigger picture standpoint, rather than continuing to add to [the current] structure. While it can create anxiety around 'what does this mean for me,' my hope is that at the end of the day we've done it right -- people feel better situated and better identify with the institution and their peers across the organization."

In response to a question about the possibility of pay cuts as a result of position reviews, Mallarino Houghton said a "cost-neutral" approach is most likely.

Mallarino Houghton said that a change in federal law (Fair Labor Standards Act) that on Dec. 1 will raise the salary threshold for overtime pay isn't the driving factor for the structure review, but it did get the process moving.

"It was an incentive to start sooner rather than later," she said. "This is long overdue for many other reasons. It just makes sense to wrap FLSA into this review."

A P&S nonexempt category, which would include positions that qualify for overtime pay, likely will be created for compliance with FLSA. Mallarino Houghton said an evaluation of job duties -- beyond the scope of job titles and position descriptions -- will determine nonexempt status. She said time-keeping policies also will be developed.

Once a consultant has been selected (a request for proposal is expected to go out very soon), an advisory committee will be created to help guide the review process. Mallarino Houghton said a timeline, dedicated website and other resources also will be developed. Planning for Dec. 1 implementation of FLSA regulations will continue, regardless of progress with the classification and compensation review.

The state Board of Regents will vote Monday on a proposed $7.3 million addition to the 2016-17 Iowa State tuition rates it approved in December. The increases include $300 for resident undergraduates, who had been looking at a tuition freeze; $100 for nonresident undergraduates and all graduate students; and $50 for all veterinary medicine students. The unusual summer adjustments come in response to an increase in state operating support for the year that began July 1 that's less than one-third of what university leaders sought.

If approved, the July and December tuition increases combined will generate an additional $33.8 million in revenue for this year's operating budget.

While officially the meeting is telephonic, it will be based in the Reiman Ballroom, ISU Alumni Center. It begins at 1 p.m. and is scheduled to last about one hour. Agenda items are online and audio of the meeting will be livestreamed on the board's website.

Other items for which ISU leaders will seek board approval include: 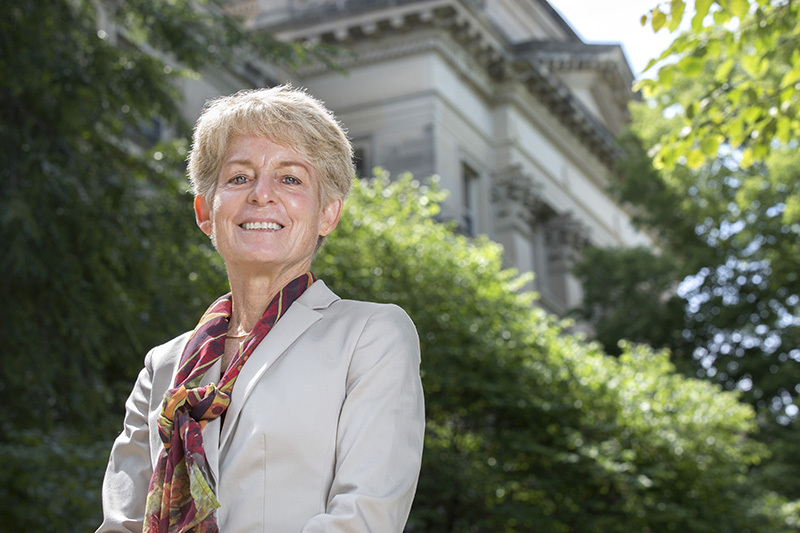 Gregory retired from the Navy last year, serving most recently as chief of civil engineers and commander of the Naval Facilities Engineering Command (2012-15). She currently sits on the board of directors for the U.S. Department of Energy's Fermi National Accelerator Laboratory in Batavia, Illinois. 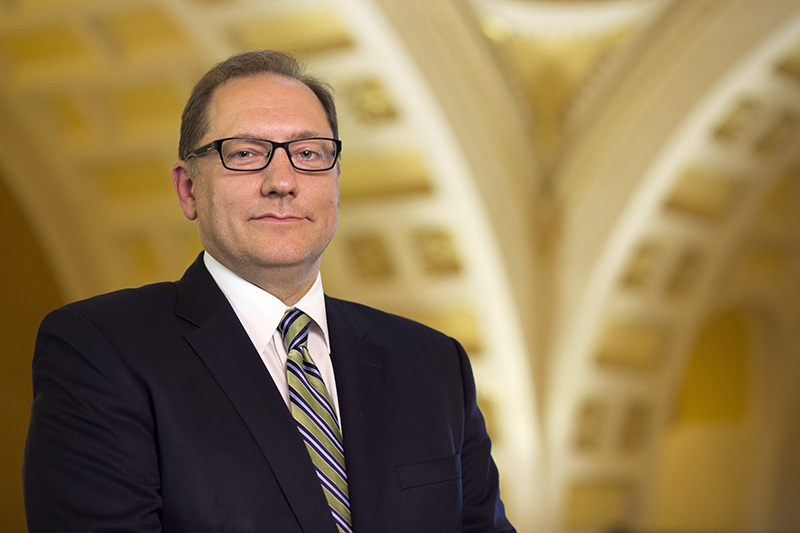 Norton comes to ISU from the Husch Blackwell law firm's Kansas City, Missouri, office, where he was a leader in its higher education practice since 2004. Norton also has extensive experience with Title IX compliance, employment law, data protection, policy development and training.

With the aim of keeping good but discarded household items out of a landfill and encouraging their re-use, the university and city of Ames are co-hosting a "Rummage RAMPage" during the lease changeover window at the end of the month. It will be held at the Ames Intermodal Facility, 129 Hayward Ave. in campustown, over five days, July 29-Aug. 2.

The event is patterned after Iowa City's "Rummage in the Ramp," which marks its 10th year this summer. With the majority of rental leases ending July 31, Ames curbs frequently are stacked around that time with items discarded by renters moving elsewhere.

Five days at the ramp

"We'd like to get items with a useful need into peoples' hands and keep them out of the landfill," said ISU director of sustainability Merry Rankin. "It's exciting to offer this inaugural event in Ames."

Rankin said those donating may not make any money -- but they will help reduce waste in town and can claim a tax deduction. She said Iowa State students are a key audience for the event -- as both donators and recyclers -- but that anyone in town may participate.

The rummage sale will be held on the intermodal facility's lower levels. ISU parking director Mark Miller said intermodal permits will be honored during the sale; any affected permit holders will receive instructions about parking on another floor for those five days.

The Rummage RAMPage website includes a list of accepted and not accepted items. The former includes furniture, small electronics, flat screen televisions and housewares. (Nonperishable food collected will be delivered to local food pantries and towels, linens and blankets donated to area animal shelters.) Unaccepted items include mattresses, box springs, pillows, clothing, shoes, tube televisions, perishable foods, books, home and holiday décor and any item from the accepted list that is broken or beyond its useful life.

Rankin said prices intentionally are kept low to help place items where they can be used again. Most items will be priced at $1, $5, $10 or $20; cash only (no checks or credit cards). Neither the university nor city keeps the revenue. It is distributed proportionately among the local nonprofit agencies that commit in advance to provide the volunteer labor that really drives the event.

Rankin said volunteers are needed to:

The volunteer effort is being coordinated through the Volunteer Center of Story County. Nonprofit (501 c) agencies may register as a group. Individuals who want to volunteer may select which nonprofit they'd like to receive credit for their hours. Rankin said first-time volunteers should allow a few minutes to register in the volunteer center's database. All volunteer assignments are broken down by date, time and task.

For those without a means to deliver their items to the sale location, volunteer teams will pick up items, for a fee, on Friday, July 29 (8 a.m.-8 p.m., within Ames city limits). This service must be requested online and prepaid in advance. To discourage anyone from abusing the service as a free haul-away, the pickup fee is $10 for ISU students and $25 for non-students.

Shoppers who purchase furniture or other large items at the sale must transport their purchases; delivery service is not available. 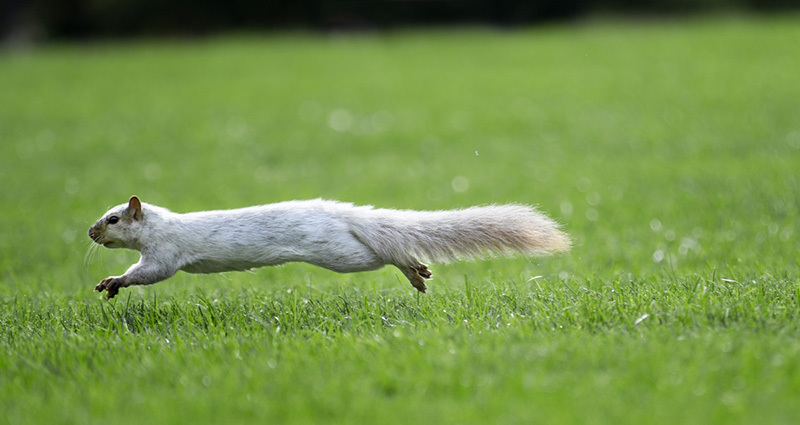 White squirrel fans now have more to love (and post to social media). It's fairly certain that central campus is home to more than one, said Tim Stewart, associate professor in natural resource ecology and management.

Stewart surmises that the genetic mutation that causes "leucism" (loss of pigment in squirrels, birds and other animals) is in the campus squirrel population and will continue to be expressed in white or light variations of the normally orange-brown squirrels of ISU.

Where to see white squirrels

Sightings of a white squirrel on campus began around 2000. Stewart said it's not likely that squirrel is still around (in the wilds, squirrels often don't live beyond three years), but we may be seeing descendants. The gene responsible for leucism likely is recessive but it may persist in the squirrel population, just like blue eyes and other recessive traits endure among humans, he said.

Leucistic squirrels and other animals are often confused with albinos. It's easy to make the call by looking at the animal's eyes, Stewart said. If the animal has the same eye color as others of its species (Iowa State's dark-eyed white squirrels do), they're leucistic. Technically, leucism involves partial loss of pigmentation, which gives animals varying degrees of whiteness. One of Iowa State's squirrels has light fur with patches of brown showing through on its face and tail. Albino animals, on the other hand, completely lack melanin, the pigment that lends color to fur and skin; albino animals are white all over with pale often-pinkish eyes.

White squirrels stand out in forests and are more likely to be picked off by predators, Stewart said. Campuses seem to provide a relatively safe haven for both white and brown squirrels, and a number of universities around the country report having white squirrel populations.

They're fox squirrels … and tree planters 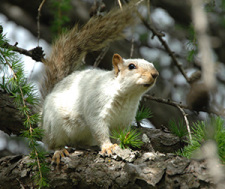 Iowa State's white squirrels, like most of the squirrels on the ISU campus, are fox squirrels, Stewart said. Their Iowa City campus cousins are gray squirrels. Those big, ball-shaped nests of sticks and leaves high up in the trees are fox squirrel homes. These squirrels also make their nests in large tree cavities.

Squirrels really do squirrel away nuts, for later recovery in the winter, Stewart said. However, they also leave behind a number of buried seeds, thus helping in reforestation. A lot of the trees in Pammel Woods, south of Veenker Golf Course, were probably sown by squirrels, he added.