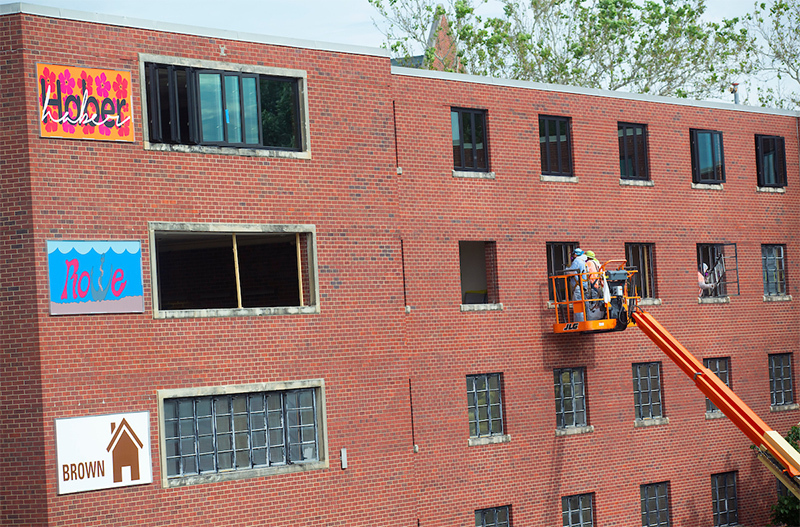 Contract crews remove and replace 60-year-old windows from Helser Hall as part of a $6.5 million, 12-week summer blitz to renovate the student residence by early August. The project includes $3.4 million for new windows and blinds and nearly $3.2 million to replace the lighting, flooring, electrical service and furniture in all 353 student rooms and a dozen dens. Both components are about 60% complete, reports Julie Hartl Barr, the residence department's manager of building improvements. Crews installed furniture on the fourth floor last week and are installing on the third floor this week.

Central offices and improved service delivery (ISD) experts who perform the university's finance and human resources work will be the first to get their hands on the Workday system when it goes live Monday, July 1.

The rest of campus will get access to Workday early Tuesday via a link emailed from the WorkCyte team. A link also will be on user Okta dashboards, the "Sign Ons" drop-down menu on the ISU homepage, the sign ons page and ISU's online alphabetical index ("Workday").

"This is an exciting time. We have been preparing for go-live for quite a while," said Kumari Henry, change manager in information technology services (ITS). "We are hard at work to make sure support is readily available to campus."

What should I do first?

Once logged in, a list of go-live activities -- for example, checking personal information in the worker profile -- will be available on the Workday landing page. As an exercise on the new system, employees planning to take time off to extend Thursday's Independence Day holiday into the weekend can view their available leave balance and request vacation time via the "Absence" application.

Employees should prepare in advance if they haven't already. Links to several resources are on the WorkCyte website, including:

If job aids and training aren't enough, employees can:

The HR and finance email addresses will be activated on July 1. Inquiries and requests will be routed to the service team assigned to the sender's unit. Senders will receive acknowledgement emails in response to their submissions.

"A support dashboard on the WorkCyte website will provide self-help options and links to PIT crews, improved service delivery teams and the solution center -- all at the click of a button to simplify your life during go-live," Henry said. "Enjoy the journey, don't forget to breathe if you get stuck, make use of the dashboard and take it one step at a time. Once you get the hang of Workday, you'll wonder how you got along without it."

Nonexempt employees -- including merit, student and temporary staff -- received information from university human resources (UHR) on June 24 about tracking work hours during the Workday transition. Instructions and recommendations were sent to managers and timekeepers last week.

"The Workday Project Team wants to ensure that there is a cutover strategy with the transition from current timekeeping methods -- whether paper or electronic -- to collecting time in Workday for nonexempt employees who are required to track their hours worked," interim vice president for UHR Kristi Darr wrote in a June 20 memo to administrative officers.

Timekeeping training and related job aids are available for employees and managers.

Your patience is appreciated

It's go-time for hundreds of Iowa State employees who have been working for months -- and in some cases, years -- to prepare campus for the Workday system that replaces many legacy programs Iowa State has used for decades to do its finance and human resources work.

The work required a hefty lift by some employees, usually in addition to their regular job duties. Many WorkCyte team members will be working over the weekend and on the July 4 university holiday to assist with Workday's launch. That's why WorkCyte program and university leaders are asking for patience in the coming weeks to give colleagues room to learn and grow in the new Workday world.

"Just like ISU, Workday and [improved service delivery] are constantly improving and evolving. We know that not everything will be perfect from the start, but we are committed to continuous improvement," said Kristen Constant, interim vice president and chief information officer. "I hope that we can all be patient and kind to each other as we work through this major transition. So many people have worked to get us to this point, making many sacrifices to help improve ISU. We are excited to see this launch."

All hands on deck

Central offices and ISD specialists will be the first to get their hands on the Workday system when it goes live July 1, with campuswide access on July 2. The WorkCyte project team will have all hands on deck, with core members staffing a command center and ISD specialists working closely with their peers to learn best practices as the first transactions and questions unfold over the first couple weeks.

Pam Cain, interim senior vice president for operations and finance, said finance specialists will meet daily in a central space during the initial days of go-live.

"This allows the specialists to share their experiences and learn from one another during those critical first few weeks," Cain said.

Campus eateries near you 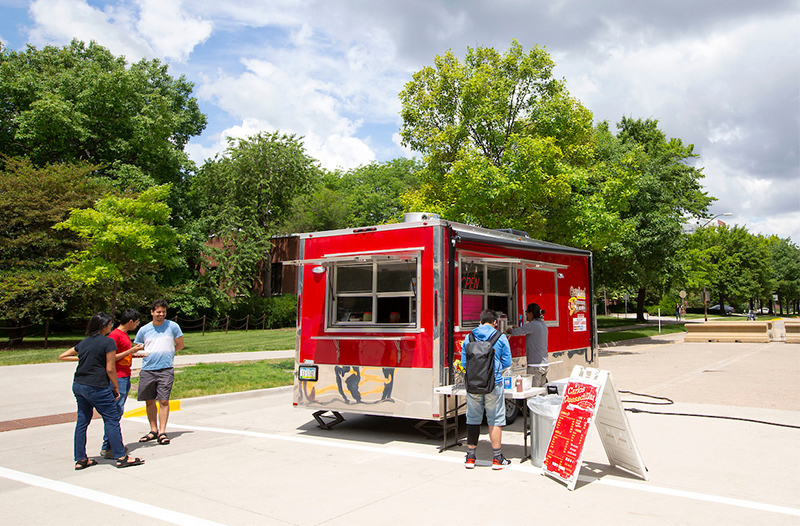 Carlos' Quesadillas is one of the food trucks serving lunch this summer west of Kildee Hall. Photo by Christopher Gannon.

Your usual coffee or sandwich stop may be shuttered for the summer, but plenty of campus food and beverage locations remain open. Take your pick from among eight cafes, the food court in the Memorial Union, a handful of food trucks, convenience stores and a dining center when you want to stay on campus.

All facilities are closed by 5 p.m. on weekdays, with the exception of ISU Dining's designated dining center, which serves dinner from 4:30 to 7 p.m. Throughout new student orientation, the Marketplace in the Union Drive Community Center served in that role; on June 29, the assignment switches to Friley Windows.

With the exception of Friley Windows and the MU Market and Cafe, which have Saturday hours during July and August, facilities generally are closed on weekends.

ISU Dining assistant director of engagement Karen Rodekamp said ISU Dining staff use the less-hectic summer months to deep-clean facilities and perform equipment maintenance. She said a majority of the department's recipe testing and menu development occurs this time of year. Chefs have finalized about 150 new recipes so far this summer for the dining centers and also are experimenting with sushi for limited service this fall.

Consult ISU Dining's hours website before you head out. Food truck vendors generally serve between 11 a.m. and 2 p.m., as the weather allows. Three of the current contracted food trucks are on a summer hiatus: Brick City Grill, Dinkey's and Taza Mediterranean Grill.

Another round of classrooms set for tech upgrades this summer

The equipment upgrades are this year's contribution to an ongoing push to improve the display tools instructors use in all of Iowa State's 207 general-use classrooms, following a similar initiative last summer to update technology in 10 large classrooms, said Mike Pedersen, manager of the ITS audiovisual experience team (AVXT).

When the work begins in July, all 10 classrooms will receive the standard suite of current gear designed to be simple and universal: connections for laptops and HDMI video, laser projector, sound system, document camera and Solstice wireless display pod.

Classrooms were selected for tech makeovers mostly on the basis of their aging systems (or lack thereof in the case of 1114 Gilman, which has no installed audiovisual equipment). Many of the rooms have control consoles with old-school, physical push buttons, Pedersen said.

"They're way past end-of-life. If one of those breaks, we can't really fix it," he said.

The project will cost about $120,000, funded by central ITS allocations to the AVXT. This year's price tag is much less than the $830,000 in classroom tech upgrades last summer because the classrooms are smaller, averaging a capacity of about 56. Last year's project, funded by the computation advisory committee, targeted auditoriums with an average capacity of 203.

"The overall project scope is significantly smaller, even though it's the same number of classrooms," Pedersen said.

Using some existing hardware also helped lower the cost for this year's work, which in most rooms did not include lecture capture technology, he said. (Lecture capture equipment was installed in the Howe Hall rooms, funded by Engineering-LAS Online Learning.)

After this summer, about 10 more general classrooms are in urgent need of updated connectivity and display devices, Pedersen said. They'll likely be tackled in summer 2020. Ultimately, his goal is to update 20-25 classrooms per year, depending on funding.

The technology added in 1652 Gilman is part of a total renovation, said Katie Baumgarn, coordinator of instructional facilities for facilities planning and management.

"It was a room that really was starting to get worn down and needed attention," she said.

Changes will include supplementary monitors hung from the ceiling, new seats and the addition of four areas for students in wheelchairs, she said. The new seating configuration in the classroom will reduce its capacity from 100 to 71. The $166,000 project is funded by the maintenance and improvement committee.

A more limited restoration is in store for 2245 Coover Hall, a 252-seat auditorium. While the room is in line for a complete overhaul within the next several years, the condition of its seats was an immediate concern, Baumgarn said. Seat cushions and upholstery are being replaced this summer, a relatively cheap ($45,000) stopgap measure funded by fees collected for nonacademic use of rooms.

"That room's going to look totally different when people come back. We need to keep that auditorium comfortable and usable so it's a good learning space for the students," she said.

Another auditorium, 1414 Molecular Biology Building (capacity 196), is getting a minor renovation, with all new lighting fixtures, Baumgarn said.

Students, faculty and staff share campus in the summer with a variety of camps, conferences and competitions held at Iowa State facilities. Here's a list of summer gatherings expected to draw 100 people or more to campus. Email inside@iastate.edu to suggest any additions we've missed.

Here's a list of summer gatherings expected to draw 100 people or more to campus.