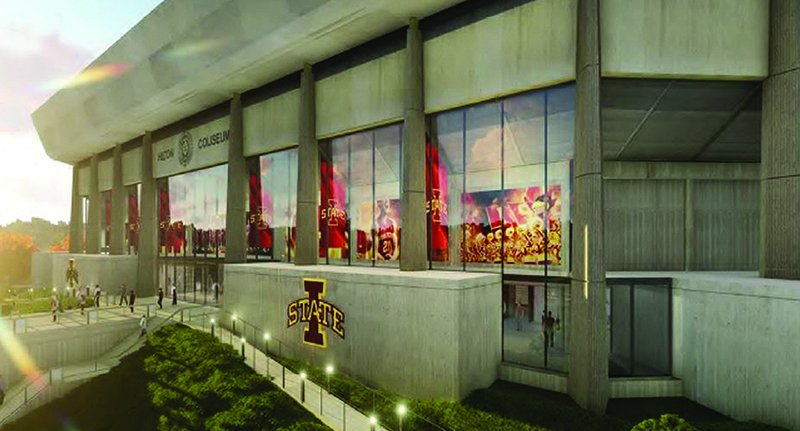 An architect's rendering of what a renovated Hilton Coliseum might look like following a concourse and entry expansion the athletics department hopes to pursue. The built-out area (center) depicts a new concessions area. Image courtesy of athletics communications.

A request to begin planning $25 million of improvements at Hilton Coliseum cleared a state Board of Regents committee Feb. 27 and will go before the full board in April.

The athletics department's concept for Hilton would move concessions on the north and south concourses from interior to exterior walls, in effect widening the concourses by 50 percent to improve circulation for fans. The new concessions areas would be equipped to serve a greater variety of food, reducing the reliance on food carts. The north and south entrances to Hilton also would receive upgrades, including accessibility features and, possibly, an outer glass curtain wall that would create dramatic two-story foyers. The building's original (1970) mechanical systems and two elevators would be upgraded. Athletics department operating funds and private gifts would cover the estimated $25 million price tag.

The board's property and facilities committee will send two other ISU requests to the full board next month:

Permits for the Memorial Union ramp, which is not managed by ISU's parking division, would go up 2.2-2.5 percent ($5-$12). The MU proposes no increases to its hourly rates next year.

Final approval is expected in April.

Board staff member Jason Pontius summarized the most recent student financial aid data (2017-18) for the board's campus and student affairs committee. He said regent universities are providing increasing amounts of aid as part of their mission to keep higher education affordable, with much of the additional aid reserved for undergraduates with financial need.

U of Iowa utility manager proposal

During his scheduled comments, regents president Mike Richards said he "strongly supports" the University of Iowa announcement in early February that leaders were exploring a service agreement with a private third party to operate campus utilities as a new revenue source. He commended president Bruce Harreld for being thoughtful, deliberative and transparent about the process. Harreld emphasized the university isn't selling its utility enterprise; simply asking a private party to operate it. Proceeds from this arrangement would go into an endowment, and the university would invest the earnings in teaching and research priorities. Following campus forums this spring, a request for proposals could be prepared in June, with a signed contract possible by the end of the calendar year.

"We will need additional resources in the future, and exploring ways to find new sources of revenue to add to our existing ones is helpful to all parties," Richards said. He also noted that new revenue shouldn't replace existing sources, "but it does help grow the overall pool."

In other Iowa State business, the full board:

The board's academic affairs committee approved these ISU name change requests, which will go to the full board in April: