Iowa State would receive $3.15 million in new state support next year -- identical to the University of Iowa -- in a proposed allocation the state Board of Regents will be asked to approve June 7 when it meets in Cedar Falls. The University of Northern Iowa would receive the remaining $2 million of a new $8.3 million appropriation to the three schools. The board's proposal stipulates that the funds be used for resident undergraduate financial aid.

The universities' request to the 2018 Legislature was $12 million for in-state undergraduate aid; $5 million each for ISU and Iowa, and $2 million for UNI.

The $8.3 million is shy of restoring a $10.9 million fourth-quarter reversion shared by ISU and Iowa this spring and made permanent in the state budget for fiscal year 2019. General operating state support for Iowa State on July 1 -- including the financial aid support -- will total $170.6 million, down from $172.9 million last July.

Gov. Kim Reynolds has not signed the education appropriations bill yet.

The board will approve tuition and fees for the year that begins with fall semester. In spite of the reduction in state support next year, Iowa State's tuition proposal remains the same as outlined in April: A 3.8 percent tuition increase ($284 for the year) for resident undergraduates and 4 percent for all others, including veterinary medicine students. It includes two other pieces:

Impacted programs would take either two or three years to get to the new rate. The two differential levels would apply to undergraduate and graduate education.

Both the academic and student affairs committee and the full board will be asked to approve a change that would make the alternative Regent Admission Index (RAI), used since 2015 for applicants whose high schools don't provide a class rank, the only admissions index for the three regent universities. If approved, the change would take effect for students admitted for summer 2020.

As part of its biannual review in 2017, the regents' inter-institutional admissions study team applied both formulas to 15,000 resident students enrolled at a regent university. It found:

The minimum score required for automatic admission remains unchanged at 245. Each university would continue to review applicant scores lower than 245 and make case-by-case admission decisions. 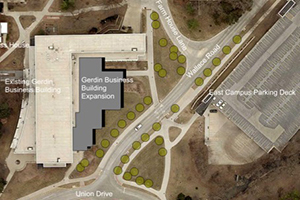 A four-story addition is proposed for the east side of the Gerdin Business Building. Submitted image.

In other ISU-related business, the full board will consider:

The academic and student affairs committee will act on requests to close two ISU centers, effective after full board approval this summer:

Record number of women on ballots