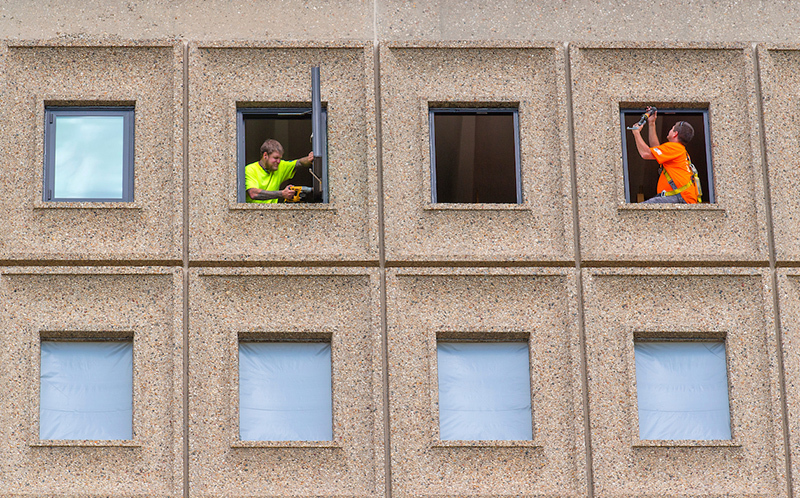 Crew members work on installing windows Tuesday in the top floor of Wilson residence hall. The Towers are two of numerous residence halls getting new windows this summer when the demand for housing is down. Photo by Christopher Gannon.

For a lucky minority on a university campus, summer brings a more relaxed schedule. For others -- including facilities planning and management's capital projects team -- it's Go Time. There are dozens of projects scheduled, but Inside offers a look at a few with the potential to impact the most people on campus.

The Welch Avenue/Union Road reconstruction has been delayed approximately 30 days due to unanticipated engineering issues with a box culvert beneath the bridge, uncovered during road demolition in March. The completion target for phase 1, originally May 4, has been moved to the first week in June.

Construction manager Leroy Brown said the two-summer timeline for the road replacement project builds in the flexibility to move some of the work to summer 2019, as necessary.

Another two-summer project to add chilled water pipes beneath Bissell Road is on schedule. On Wednesday, a second section of Bissell closed, from the west side of Sweeney Hall to just south of the Osborn Drive intersection. Bissell Road's lot 14 (reserved and handicapped parking) has moved permanently up the street to west of the Armory.

Both projects will wrap up for this summer by Aug. 10.

Work continues to expand the parking capacity on the north, south and east sides of Hilton and adjust sidewalk locations to improve pedestrian safety. A new north driveway to Lincoln Way has been completed. Hilton will be accessible for events throughout the summer. The work will wrap up by the end of August.

New ceiling lights outside the perimeter of the Hilton court were installed last year. This summer, the old lights above the court will be removed, and those lighting holes in the plank ceiling filled. The wood planks will be painted black. Work begins after the final high school commencement of the season (May 30) and will last about four weeks.

The Hub and the Memorial Union food court are closed for remodels. The food court, with a new central salad/food bar, will be ready for the start of fall semester; the Hub is scheduled to reopen in early November with a more crowd-friendly floor plan.

The men's and women's restrooms -- 14 in all -- on the basement through third floors (1960s addition) of Parks Library will be renovated, and restrooms will be added to the fourth floor in this part of the building. Demolition began last week. The renovations will occur over two summers, with the south stack of restrooms completed this summer and the north set next summer. As designed, each south set of restrooms will become a larger women's restroom and a separate family restroom. Each north set will become a larger men's restroom and a separate custodial closet. A lactation room formerly on the lower level will be relocated to the first floor. The first phase should wrap up for the summer in early August.

The 50-year-old building's exterior will receive numerous repairs as needed, including minor tuck-pointing, replacement of sealants, painting of soffits and repairs to the precast concrete panels at the top of the building. Work will begin in early June and continue through the end of October. Sidewalks around Zaffarano should remain open.

East-west pedestrian traffic through this part of campus this summer will need to travel along Lincoln Way or south of the Forker Building due to multiple building projects in Richardson Court. The area is blocked off as a construction zone.

Work continues east of the Maple, Willow and Larch residence halls to upgrade the recreation fields. Current tasks are to run electrical lines to the light poles and scoreboards, construct a bioswale around the perimeter to assist with drainage, install an irrigation system and grade the area for grass. The goal is for students to use the fields this fall for intramural activities.

P&S Council Meet and Greet, May 22