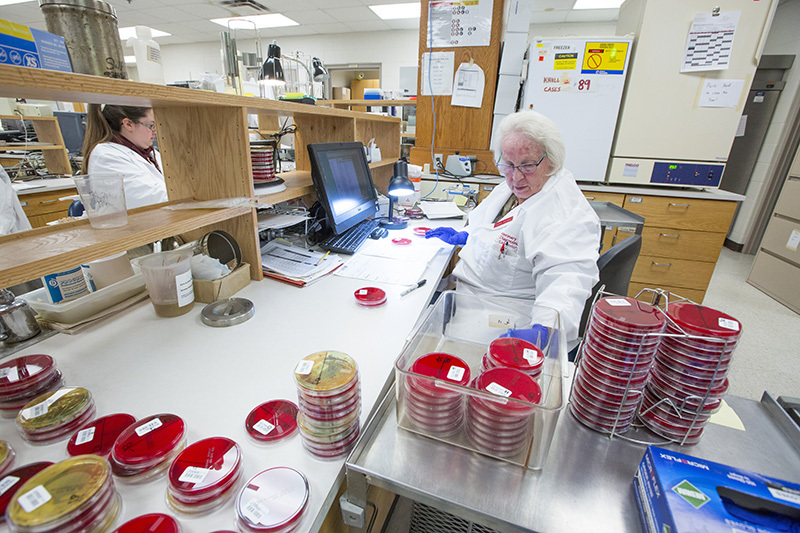 A typical day at the Veterinary Diagnostic Laboratory (VDL) begins with opening the mail. Stacks of cardboard boxes containing samples to be tested -- chunks of brain, snippings of bovine ears, vials of blood, oral swabs -- arrive each morning in the same loading dock as the lab's supplies and bills.

Crews in the receiving room make quick work of each package. Using software custom-built by Iowa State, they verify, label and assign tracking markers to the submissions sent in by veterinarians from Iowa and across the U.S. Some samples come with specific instructions and head directly to the necessary labs. Others come from diseased animals and are passed to the on-duty diagnostician in the adjacent necropsy room, who assesses what tests are needed. 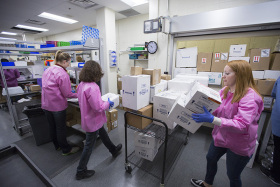 By midday, the receiving room that was bustling and cramped in the morning is largely quiet, many workers retreating to sections of the lab that conduct specific types of testing, such as virus identification, bacterial cultures or detection of toxins. Throughout the aging complex, technicians are preparing fluids and animal parts to be examined in increasingly varied ways. The heavy flow of case submissions is vital to Iowa's $32.5 billion livestock industry -- as well as a source of training for veterinary students and research for VDL faculty -- but it takes place in a facility ill-suited for the modern realties of animal agriculture.

The university plans to build a stand-alone laboratory to replace the VDL, a $124 million project that would solve its deficiencies in space, biosafety and biocontainment. For example, VDL staff and faculty test for contagious animal diseases inside the College of Veterinary Medicine complex, right next to the college's animal hospital, in labs that share airflow and access with the rest of the building. Main said there's no way to adequately protect against cross-contamination in the sprawling connected facilities, which have a combined square footage more than four times as large as Jack Trice Stadium's.

In recent years, the VDL has been the nation's largest and busiest full-service diagnostic lab for food animals, Main said, processing nearly 86,000 cases in FY2017 -- more than double the 2009 caseload. When the lab opened in 1976, it processed 16,000 cases per year, and employed 10 faculty and 20 staff members. Twenty-five faculty and 125 staff work there now.

"It was a totally different world then. Iowa and U.S. animal agriculture have changed immensely, as has the scope and complexity of the diagnostic services provided," Main said.

Iowa State began studying the VDL's facility needs six years ago after two independent audits questioned the lab's biocontainment security and overcrowding, issues that could limit its ability to respond to large-scale disease outbreaks. To allow for the surge capacity an outbreak requires, for instance, Main said the receiving room where testing samples are opened, inventoried and routed would be roughly twice as large in the new facility -- and be served by a dedicated dock for deliveries.

Even after an outbreak passes, it leaves an impact on testing caseloads, Main said. The emergence of new diseases requires livestock producers to be even more diligent in their efforts to use state-of-the-art diagnostic tools to mitigate the impact, spread or entry of those diseases into their farms. The 86,000 cases in FY17 involved the lab conducting more than 1.25 million individual diagnostic tests.

"Today’s animal agriculturists are getting more sophisticated. They don't want sick animals," Main said. "It's precision agriculture. Practicing veterinarians and the producer clients are utilizing the laboratory not only to diagnose the cause of ill health or death, but they are ever increasingly using diagnostic tools as a mean of preventing disease” 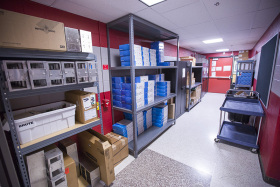 At the Veterinary Diagnostic Laboratory, many hallways double as storage space.

For example, the lab recently began testing swine with two new methods invented by Iowa State researchers and designed to monitor entire populations, Main said. One test collects fluids from tissues removed from newborn pigs, while the other gathers saliva samples from a rope hogs chew on, he said. Both methods are more sensitive and less intrusive than selecting random specimens for blood testing.

The lab also has been adding new equipment, such as machines that automatically fill test tube samples, to improve quality control and reduce repetitive motion by employees. That's a challenge in a facility where space is at a premium. At the VDL, closet-sized spaces often hold testing equipment, while hallways are flanked with refrigerators, filing cabinets and supply shelves. The proposed new facility calls for increasing the lab's size by about 30 percent, to 150,000 gross square feet.

VDL clientele pay for the bulk, about 80 percent, of the lab's operational expenses, along with $4 million in a direct state appropriation from the Iowa Department of Agriculture and Land Stewardship, some federal funding and university support for salaries.

But building a new facility will require additional state assistance. Iowa State's proposal calls for $100 million in appropriations spread over five years, along with $24 million in private donations and university funding. A recent study by ISU economists found the annual state funding for the lab delivers a high return on investment, 8-to-1 during normal years and four times that during an outbreak.

The project wasn't included in early budget bills proposed this session by state lawmakers, but Gov. Kim Reynolds, in her proposed FY19 budget, recommended funding the project beginning in FY20. The mention in the governor's budget proposal was encouraging, but if the Legislature doesn't make a full funding commitment this session, even $5 million to begin formal project planning would be extremely helpful, Main said.

Tentative plans call for building the new lab building on the southwest corner of the College of Veterinary Medicine campus. Main said the project includes the cost of renovating the lab's existing space into research and teaching areas. That's a significant side benefit for the college, which has at times struggled to recruit elite researchers due to space concerns, he said. 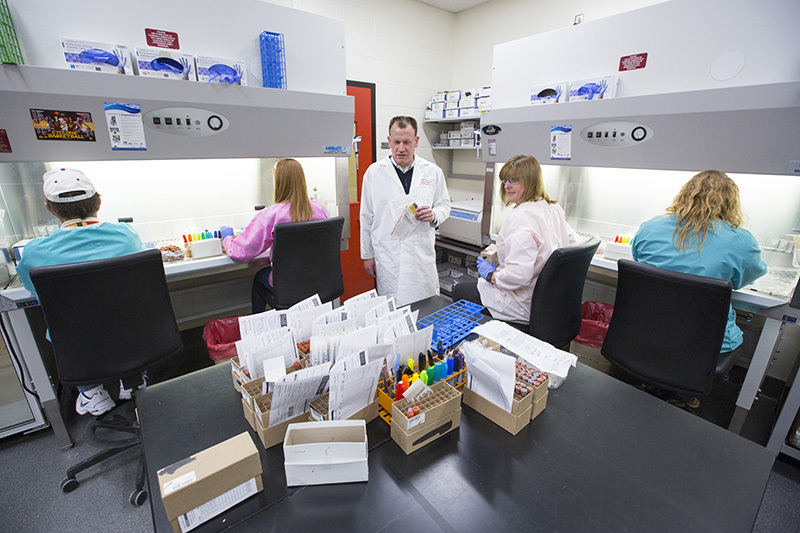 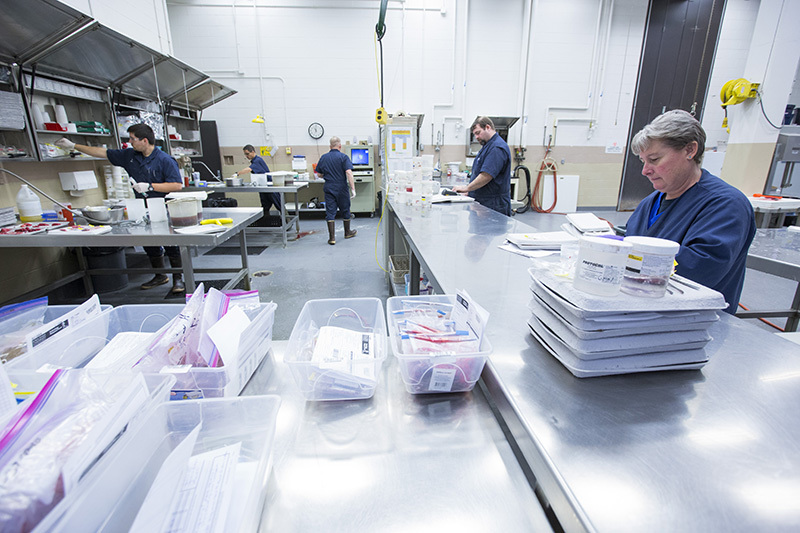 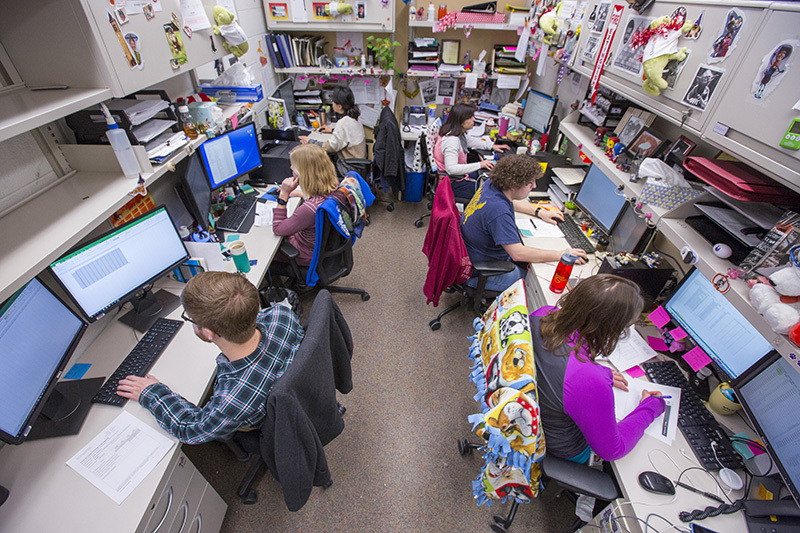 Staff crowded into a small office space at the Veterinary Diagnostic Laboratory.

A Greek tragedy, with a twist