Solar "challenge" lives up to its name 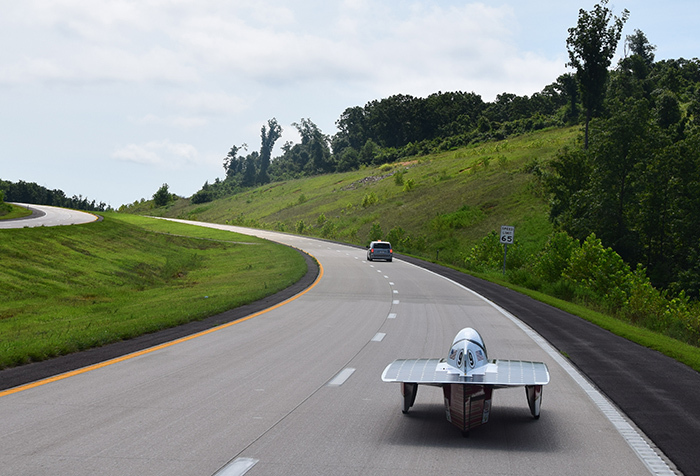 Iowa State's Phaëton 2 trails its lead vehicle on the road to Topeka, Kansas, on Wednesday. Photo courtesy of Team PrISUm.

Five days into an eight-day, 1,975-mile race for student-built solar cars, Iowa State's Team PrISUm and its Phaëton 2 vehicle are in a three-way battle for eighth place among the 12 universities still competing. Twenty teams arrived in Pittsburgh July 21 hoping to qualify in a series of car performance tests and laps completed on a speedway.

If engineers are known for their problem solving, Team PrISUm was put to the test this week. The team has dealt with failed axle bearings on the towing trailer, a battery charging system that blew up on the eve of the race, bent axle and smashed wheel covers due to a gap in the road shoulder (the car pitched into the ditch) and a failed electrical power board. Fixing several of these issues cut into solar cell charging time at the end of the day, with the potential to impact the next day's performance.

Wednesday began the longest of the race's four stages, an 850-mile stretch from Republic, Missouri, to Gering, Nebraska, that the teams have up to three days to complete. Team PrISUm reached Wednesday's checkpoint in Topeka, Kansas, and departs from there Thursday. Once the teams reach Scotts Bluff National Monument in western Nebraska, it's a 158-mile jaunt Saturday from Gering to the finish line at Wind Cave National Park near Hot Springs, South Dakota.