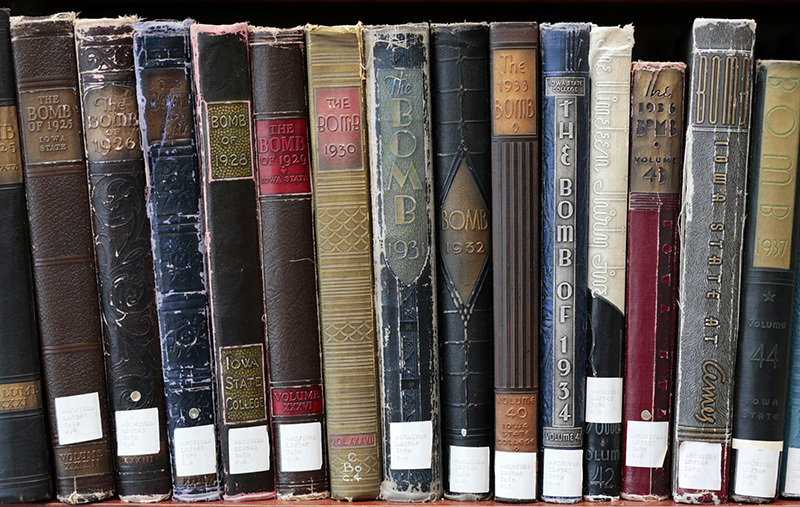 20s- and 30s-era editions of The Bomb line the shelves of Parks Library. Photo by Christopher Gannon.

The complete collection of The Bomb -- 45,000+ pages -- is now online. University library staff recently completed a six-year project to digitize Iowa State's yearbooks from 1893 through 1994. All volumes, as well as audio from a scratchy vinyl record chronicling 1971 sounds of campus, are part of the library's digital collection.

"Fellow sufferers, we consciously project this BOMB into your midst without making the slightest apology."
Preface, "The Bomb," 1893

The yearbooks can be read as a virtual book with "turn-able" pages, viewed as single pages or downloaded as PDFs. For extended viewing of a volume, digital initiatives archivist Kimberly Anderson recommends downloading. Off-line browsing will be considerably faster, she said.

The search function on the yearbooks is a work in progress.

"We're still working to improve the reliability of the search and convenience in using the site," Anderson said.

The university library has many digital collections exploring such topics as:

For those who prefer the real thing to the virtual, all the old Bomb editions can be pulled off the shelves in the special collections reading room on the fourth floor of Parks Library, or requested at the first-floor circulation desk.

End of an era

The yearbook lost its partial student government support in 1972. During the 1980s and early 1990s, decreased sales, poor financial management and a contract dispute with an outside vendor adversely affected the balance sheet. By 1995, the yearbook had accumulated a $90,000 budget deficit, and university administration announced that no future yearbooks would be produced until a sustainable plan was developed. No plan emerged and 1994 proved to be the last edition.