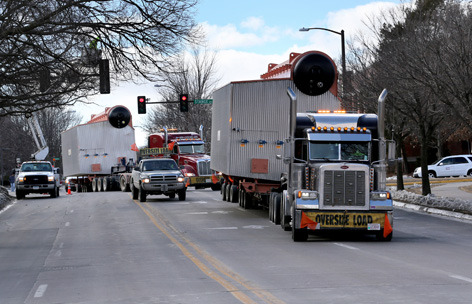 The three 80-ton boilers that arrived on campus Tuesday did more than slow traffic on Pammel Drive. They foretold a sizeable shift in university power use, as coal takes a backseat to natural gas.

Once the boilers are installed, the new power plant lineup -- three natural gas and two coal boilers -- will tilt energy use on campus toward the greener, more energy-efficient gas.

The new boilers bring many environmental benefits, said Lindsey Wanderscheid, project engineer in utility services. The amount of coal burned at the power plant will drop by about one-third, or 48,000 tons, annually. Gas and particulate emissions will be significantly reduced. And less coal burning reduces the amount of ash that must be disposed of.

"Generally, we'll run three boilers at once -- two gas and one coal," Wanderscheid said. "In the winter, when we have higher loads, a fourth boiler will be in operation."

Utility officials keep a close watch on market fluctuations in fuel prices when determining whether to run coal or natural gas boilers.

The 43-foot-long boilers were made in Lincoln, Nebraska, and transported by rail to Boone. Each arrived on campus Tuesday atop a special hauling trailer and accompanied by a small convoy of utility trucks and police cars. The last leg of the trip for the boilers was the stretch of Pammel Drive that runs from Hyland Avenue east to the power plant.

The boilers will be installed on the east side of the power plant at the site that once held coal and ash handling equipment. The old structures have been removed and construction of the building addition to house the three boilers is underway.

"The first of the three new boilers is scheduled to start up late this summer," Wanderscheid said. "All three should be in operation by the end of the year."

All boilers -- natural gas and coal -- connect to existing steam, water and electrical systems in the power plant and are used to produce steam (heat), electricity and chilled water (cooling) for the campus.

The $42 million boiler project was three years in the making, beginning with state Board of Regents approval in November 2012. The project is funded by utility revenue bonds, which are repaid through campus utility revenue. Net impact on utility rates for campus users was minimal. 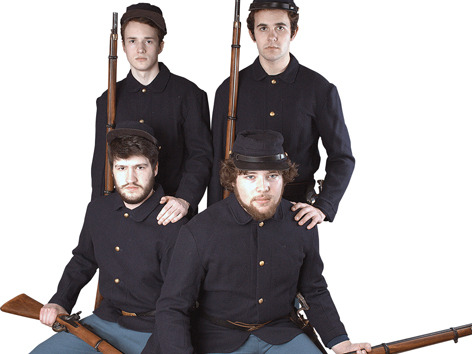 Love and Honor: Iowa in the Civil War begins a two-weekend run Feb. 27.