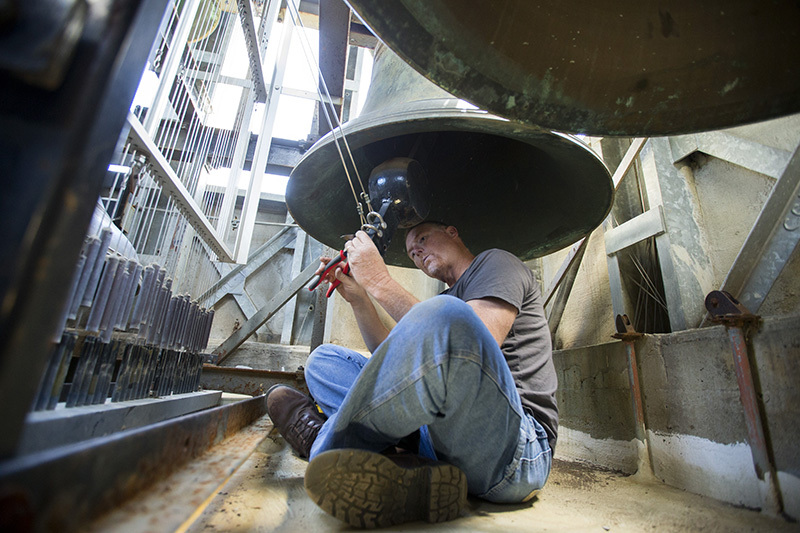 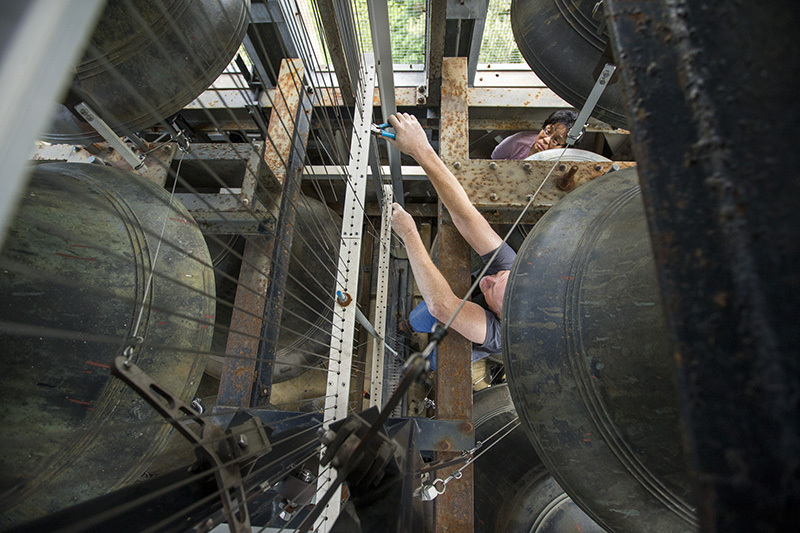 The system of guide wires that connects the carillon console to its 50 bells is being removed and replaced as part of maintenance and repair work that began Monday.

Pictured at top in the bell chamber, Patrick Bradley, a service tehnician with the Cincinnati-based Verdin Company, is removing the wiring on a bell clapper. In the photo above, carillonneur Tin-Shi Tam looks on as Bradley disassembles the wires of the transmission system.

Restoration work has closed the campanile for the summer, with completion scheduled by Aug. 18. Photos by Christopher Gannon.

By Anne Krapfl
May 25

An estimated 5,600 would-be fall freshmen will participate in Iowa State orientation during June. Roughly 300 at a time, they'll attend one of the 20 two-day sessions scheduled. The first begins on Tuesday, May 30; the last on Wednesday, June 28. This summer, two sessions will begin on a Sunday (June 11 and 25) to accommodate families who face scheduling conflicts during the week.

In addition, about 400 transfer students will attend a one-day orientation tailored for them. The first was May 22; the second is scheduled for Friday, June 30.

It's not just the practically-college-students who are trying on Iowa State. They'll bring about 9,000 friends and family members with them, according to Liz Kurt, director of new student programs. Some committed to Iowa State months and months ago; others are still shopping.

"More than ever, high school seniors are still visiting schools this time of year and haven't made up their minds about where they are going to college," Kurt said. "This tells us that many attending orientation are still on the fence."

Some even will use orientation as their first look at campus. The Cyclone assignment -- perhaps apparent but not simple: Roll out the [cardinal] carpet and help them feel welcomed, Kurt said.

What goes on at orientation?

For incoming students who have accepted admission to Iowa State, orientation gets the student process rolling. They'll get their ISU email accounts and student ID cards, meet with an academic adviser, register for fall classes, learn how their UBill account works and hear an overview on financial aid programs and processes (there's also time for one-on-one meetings with financial aid advisers). The afternoon of the first day is dedicated to undergraduate college-specific orientation sessions. There are optional tours, including campus, library, residence halls and rec services. They'll learn about all the services offered by the public safety department and within the broad umbrella of the dean of students office. Most importantly, they'll have nearly two days to get answers to lots of questions so they're more confident when they return in August.

*A change from past years

Kurt noted one other location shift from past summers: The UBill and financial aid overview sessions will move to the MU South Ballroom (from the Curtiss Hall location of recent years).

Orientation visitors will park in the lot that wraps north and east of the Maple Willow Larch residence complex and check in at the Hixson-Lied Student Success Center. Those who opt to stay overnight on campus will be in Maple Hall. On-campus lunch options are in the Memorial Union and the Union Drive dining center; dinner also is at that dining center. Most of the morning and evening sessions are in the Memorial Union. A full schedule (PDF) is online. 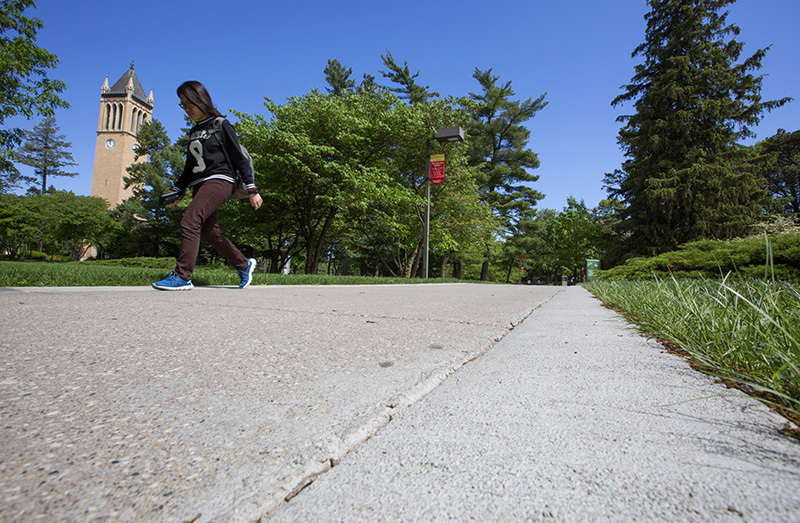 Some homegrown ingenuity helped solve a long-standing problem for campus services crews and provide better conditions for pedestrians. As water drained after rain or from melting ice and snow, it would impact stretches along sidewalks -- pooling mud in low-lying areas and washing out soil alongside the pavement.

Les Lawson, campus services manager in facilities planning and management, said that created pedestrian hazards, such as tripping on washed-out ruts and slipping in the mud. So, three years ago, Lawson huddled with landscape architect Chris Strawhacker and now-retired campus services supervisor Tim Watson. And, voilà, a solution -- what Lawson half-jokingly calls the "Watson gutter" -- was born.

"Tim Watson is a go-to guy who can figure just about anything out," Lawson said.

The first test was the sidewalk north of the Gerdin Business Building. A foot-wide strip of cement was installed, bordering the existing sidewalk. The outer edge of the new strip was slightly raised, channeling water back toward the sidewalk. Instead of running off the pavement, the water was collected and channeled by the sidewalk -- like a gutter.

Over the last three summers, campus crews have implemented the erosion mitigation measure in eight areas along ISU's 34 miles of sidewalks. Depending on the incline of the sidewalk, some need pavement strips on both sides and some need just one to get the job done. Next on the list is a stretch of sidewalk south of the Farm House Museum.

"It has been 100 percent successful," Lawson said. "We haven't had a failure yet."

Jim Reecy, professor of animal science and director of the office of biotechnology, has been named an associate vice president for research in the office of the vice president for research (OVPR), effective June 1. Reecy takes over the position from Wolfgang Kliemann, who will return to the mathematics department in August. Kliemann had served in the role since 2014.

Reecy will work with faculty and the OVPR leadership team to develop opportunities for interdisciplinary research and to support faculty in successfully pursuing their research goals.

Reecy came to Iowa State in 1999 as a faculty member in the animal science department. His research interests have focused on beef cattle genetics and genomics to improve the nutrient content of beef, disease resistance of beef cattle, and livestock bioinformatics. He became director of the office of biotechnology in 2009, helping faculty address biotechnical research questions and providing researchers state-of-the-art equipment and services. A search for a new director for that office will occur this fall.

Paul Fuligni has been named associate vice president for facilities planning and management, effective July 10. Fuligni has served as director of facilities management at Southern Illinois University, Edwardsville, since retiring from the U.S. Navy in 2011.

"We're excited to have Mr. Fuligni join the FPM team, and know he will be a great addition to our already great organization," said Kate Gregory, senior vice president for university services.

Fuligni will oversee FPM operations, which include:

Fuligni earned his bachelor's degree in civil engineering from Northwestern University, Evanston, Illinois; and a master's in environmental engineering from the University of California, Berkeley. He succeeds Dave Miller, who retired in January. Utilities services director Jeff Witt is serving as interim associate vice president.

Monthly updates are provided to ISU's change liaisons and stakeholder groups, then posted on the WorkCyte website. Information also is added to the FAQ as needed. Questions and comments can be submitted online.

Implementation of Workday, a major component of the overarching WorkCyte initiative to update and streamline campus-wide (enterprise) systems and processes, is moving into the "architect" phase.

Through August, consultants will meet with ISU personnel in small design sessions as part of the architect phase. Current ISU financial and human capital management business processes -- more than 350 of them -- will be analyzed and matched with the appropriate business processes in the Workday platform.

"The architect phase is where we dig deep and begin to uncover how we can work smarter, not harder," said Francis Quinn, WorkCyte project director. "We will discover and strategically preserve in Workday the best of the multitude of ISU processes that have been implemented over the last 40 years."

Top administrators who handle financial and human capital management processes (such as university human resources and the finance division) will serve in leadership roles during this phase. Key representatives with first-hand knowledge of the processes also will provide input during the design sessions. Information from these small-group design sessions will guide the custom configuration of Iowa State's Workday platform.

Mindi Balmer, who directs information management in university human resources, serves as a co-leader for the WorkCyte human capital management and payroll processes.

"Input from key stakeholders across campus is required during each stage of deploying Workday at Iowa State," she said. "Project teams will work hard to combine the right skill sets and knowledge of business processes to collectively best meet ISU’s needs."

Running in tandem with the architect phase of Workday -- and into future development of the overall WorkCyte initiative -- are change management teams, who are collecting information and preparing for implementation. Their work includes:

A national search has begun for an assistant vice president in the division of student affairs. The new position, created as part of the new leadership structure in student affairs, was established to create a multidisciplinary approach to student health and wellbeing.

Posted this week, the assistant vice president for student health services will oversee the Thielen Student Health Center, student counseling services, student wellness office and recreation services. Applications and nominations will be accepted through June 22, with campus interviews tentatively planned for the week of July 31.

Roberta Johnson, director of student financial aid, is chair of the search committee. The Spelman Johnson consulting firm is assisting with the search.