The College of Engineering's student services office was the first to move in to Marston Hall on July 20, following a two-year, $27.1 million renovation. The remaining tenants should be housed in the 113-year-old building by the end of July. A rededication event for Marston will be held on Sept. 29. Photos by Christopher Gannon. 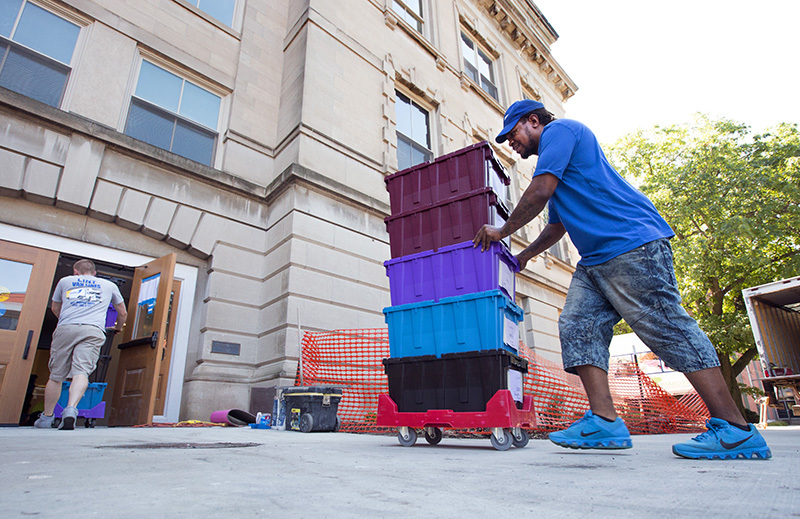 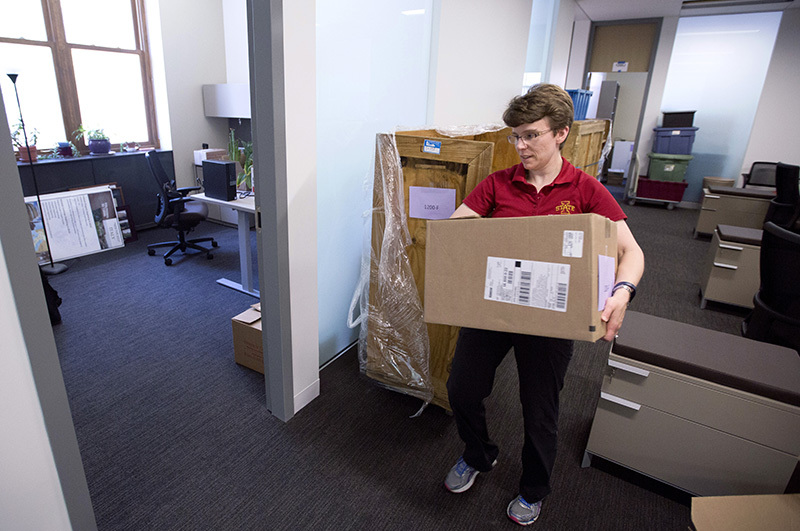 Shannon Miner, an adviser and coordinator for international engagement in Engineering student services, carries a box into her new office.

Colors make websites vibrant and, sometimes, inaccessible. Those who are colorblind (about 1 in 12 men and 1 in 200 women) and those with low vision often cannot use certain websites due to their color schemes. It doesn't have to be that way.

Colorful websites that are accessible adhere to two key rules:

Here are some practical examples of how to put these rules into practice.

There are a number of online and downloadable tools to check contrast ratios. Most also provide a "pass" or "fail" grade, based on standards of the Web Content Accessibility Guidelines (WCAG). Iowa State's proposed accessibility policy calls for university websites to comply with WCAG's Level AA standard.

Here are some good checkers.

AFTER: "Required" text an easy fix

BEFORE: Some can't pick out the red

Color often is used in online forms to denote mandatory fields. The "before" form specifies that all red fields must be completed. Coloring the mandatory fields red is a helpful visual for some, but useless for those who can't easily differentiate between red and black text.

The "after" example keeps the red color cues, but backs them up by adding a "required" notation to mandatory fields. The added text opens the form to those who are color challenged and to those who use screen readers to view websites. 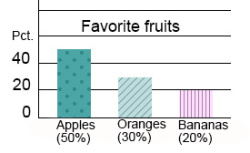 To create accessible charts, use color combinations that are considered "colorblind safe." The Colorbrewer 2.0 site provides a number of color sets that are easy on the eyes of those who have limited color vision. To make bars and pie slices stand out even more, add different patterns to the charts.

It's also helpful to add text to help users interpret charts. For example, the text below the bars on the "Favorite Fruits" chart takes the hassle out of trying to figure out the percentages yourself.

Charts, like almost all visuals on a web page, also should be accompanied by descriptions of what the data means. These descriptions are essential for those using screen readers. For complex charts, the descriptive text may be posted on its own page with a link from the chart. 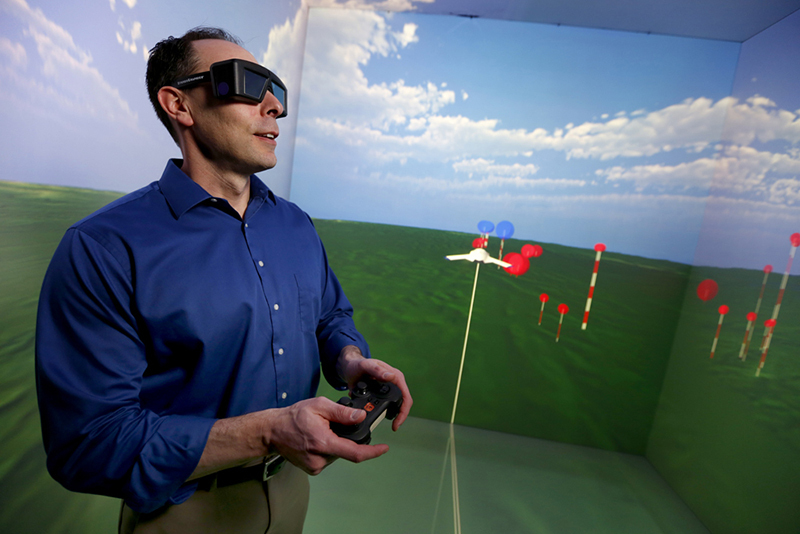 The change reduces the estimated tuition revenue growth at Iowa State by $915,000, to approximately $32.6 million. By contrast, the increase in state operating dollars this year is $2.2 million.

"In the comments I received as a regent, there's a lot of concern out there about the increase, but also concern about how we maintain the high quality of the education at our three universities. So you're conflicted about what side you're going to pick," McKibben said.

"Some will say we're not coming down far enough, but I very much support it," he added.

Board president Bruce Rastetter noted that McKibben's proposal was vetted through the three university presidents to see if they could manage their budgets with less tuition revenue. All three told him yes, he said.

Rastetter also pledged changes to the board's tuition-setting process, including asking the Legislature to consider a two-year cycle for higher education appropriations and to conclude the state budget discussion earlier in the session because of its impact on university budgets -- and ultimately Iowa families if tuition rates are reset. Families receive fall tuition bills on Aug. 1, he noted, but plans for paying them begin much earlier.

Rastetter announced that President Steven Leath and Iowa President Bruce Herreld both asked to forgo a compensation increase on July 1, the start of the new fiscal year. The board completed performance evaluations for the two at its June meeting, but Rastetter said, even prior to June, the two presidents indicated they would decline an increase. Leath and Herreld will receive scheduled mid-year evaluations in January 2017; Rastetter said compensation increases would be addressed again then.

Every other year since 1969, the state's three public universities have compiled a unit cost of instruction for the state Board of Regents. The most recent data, received by board members this month, is for the fiscal year that ended June 30, 2015.

The unit cost calculation starts with state operating appropriations to a university (both general university and special purpose appropriations). It equals the total amount of state-supported instructional expenditures divided by the number of fulltime-equivalent students served in different categories.

Costs included in the calculation are those associated with: instruction, research, academic support such as libraries and academic computing, a portion of student health and counseling services, a portion of institutional administrative costs and some building operation/maintenance costs. Costs do not include building repair, public service, scholarships/fellowships, indirect costs, and auxiliary and health care units.

Other Iowa State items the board approved include: