A new one for Fish Tank Lobby 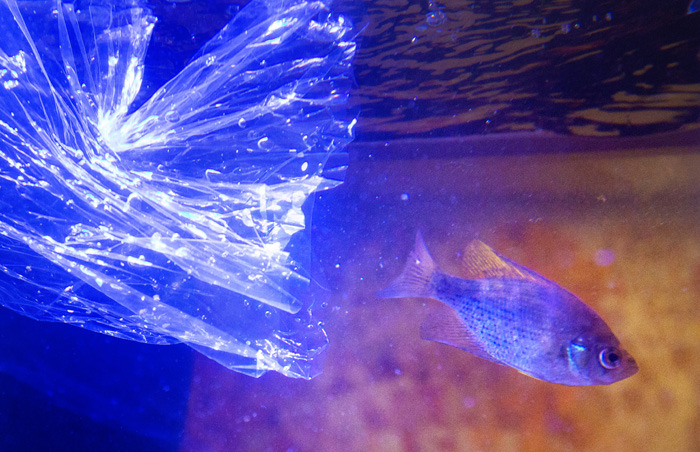 Named for one of its defining features, the Fish Tank Lobby near the southwest doors to the College of Veterinary Medicine was "up-tanked" earlier this month. A new 350-gallon tank nearly doubles up on the aquarium it replaced. With members of the college's Aquatic Animal Medicine Club leading the effort, approximately 175 fish, representing 18 fresh water species, were introduced to their new home on March 3. (Pictured) One of the fish escapes its plastic shipping pouch. Club members will be responsible for feeding the fish and testing the water quality. Photo by Christopher Gannon.

By Rob Schweers, Office of the Senior Vice President and Provost
March 10

The committee tasked with leading the search for the next dean of the College of Human Sciences has identified three candidates who will visit campus after spring break. Their two-day interviews will include meetings with faculty, staff, students, campus leaders and external stakeholders. The finalists and their visit dates are:

Each finalist's schedule also will include an open forum with the campus community and public. The forums will be recorded and made available at the conclusion of the interview process for those unable to attend in person. Those interested in attending the open forums should hold the following dates and times:

Information on the finalists, including interview itineraries and resumes, will be posted for each candidate on the provost's office website on the Thursday prior to each visit.

"Serving as dean of the College of Human Sciences is a tremendous opportunity, and there is a lot of interest in the position," Wickert said. "The search committee did a great job in identifying the three finalists, and I am excited for our students, faculty, staff and community to meet with the finalists during their visits to Ames."

The search committee is co-chaired by Cathann Kress, vice president of Extension and Outreach, and Wendy Wintersteen, dean of the College of Agriculture and Life Sciences.

Editor's note: This story was edited as each of the finalists was announced. 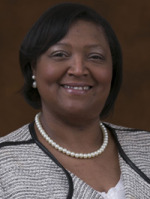 "Ms. Foreman is highly regarded for her unwavering commitment to diversity, equity and inclusion," President Steven Leath said. "Her experience and credentials will be an asset to the university as we strive to create a welcoming, inclusive and safe environment for everyone."

"The university mission fits inside my own personal mission, my career ideals about making the world around me a better place," Foreman said. "I fell in love with the idea of being a member of an organization where I can practice, grow and help to create positive changes. I believe Iowa State University is the organization and community where I can make that happen."

During her first few months on the job, Foreman said she will ask university community members what they see as equal opportunity priorities on campus. She noted that her role is "to initiate partnerships and collaborative relationships across campus so equal opportunity, equity, and affirmative action can be embraced."

Foreman earned a bachelor's degree in general studies with a concentration in social behavior science (2005), and a master's degree in public health (2013), both from IUPUI.

Mary Sirna, administrative adviser for ISU police, has been serving as interim EO director since October.

A motion to adopt a required course for international undergraduate students was introduced at the March 8 Faculty Senate meeting. The seminar, aimed at helping students transition to an American university, was launched experimentally last fall and continued this spring. Senators will vote on the motion next month.

"The idea is that the international students that come in need help getting acclimated to academic life in the United States," said academic affairs council chair Tim Bigelow. "There are several best practices that have been developed and one aspect of that is to have an orientation course for them."

As proposed, the mandatory International First Year Experience Seminar (University Studies 110X) would be a one-credit, semester course coordinated jointly by the College of Liberal Arts and Sciences and the International Students and Scholars Office. It would include a weekly large lecture section (50 minutes) and smaller recitation groups that also meet weekly.

Current students -- one American and one international, both with leadership training -- would facilitate the recitation groups. Graduate students would work with the lecture sections and guest faculty and staff lecturers would present on topics such as campus resources, academic issues, U.S. culture and immigration regulations.

Iowa State head football coach Matt Campbell spoke to senators, giving them some insight on his education-based background and its impact on his coaching style.

He credited Iowa State's recruiting success to the academic strength of Iowa State and said faculty can expect the football players to be "ambassadors of the student-athlete experience." He said he has asked them to be 10 minutes early to class (what he called "Cyclone time") and to sit in the first two rows. He added that they will conduct "class-checking" to make sure the football players -- particularly freshmen and those struggling academically -- are attending their classes.

"I want you to know from my end how serious I take it," Campbell said. "We won't have great success on the football field until we do a great job academically, off the field." 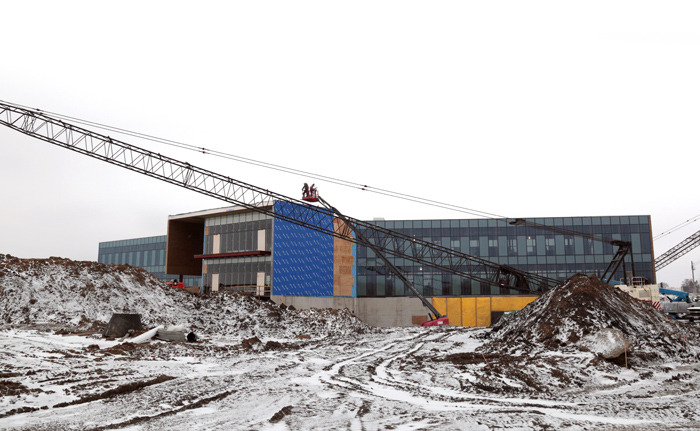 Venture south to the third roundabout installed on University Boulevard since last summer and you'll see it. Iowa State's economic development core facility, anchoring a new third phase of the ISU Research Park, is enclosed and moving toward an anticipated completion date in June.

The front (pictured above) of the two-story, 42,000-square-foot building faces north, toward the first two phases of the research park about one-quarter mile away.

The building will provide a one-stop shop for industries and businesses seeking Iowa State assistance and expertise. University offices scheduled to relocate to the hub facility this summer include economic development and industry relations, intellectual property and technology transfer, research foundation, Pappajohn Center for Entrepreneurship (including the CyBIZ Lab), Center for Industrial Research and Service, and the ISU Small Business Development Center. Administrative staffs for the research park and Central Iowa Cultivation Corridor also will move to the building.

The provost and university human resources offices will receive a request for action from the Professional and Scientific Council. At its March 3 meeting, the council approved a motion to share its guidelines for P&S teaching staff with both offices.

The council's executive committee developed the guidelines for P&S staff who teach for-credit courses as part of their duties or outside their position descriptions, and for their supervisors and department chairs. The document outlines the various resources and policies that apply to teaching appointment issues -- such as time allocation, position description updates, additional compensation, faculty rank and maximum teaching loads.

A summary in the council's document indicates a need for "streamlined communication." It also states that the guidelines "should be easily accessible, should be included in supervisor training and should provide a comprehensive resource for all parties."

Along with distribution to human resources liaisons, supervisors and department chairs, the approved document also includes a recommendation to integrate the guidelines in:

Vote online March 9-25 (by 5 p.m.) via AccessPlus. Candidate bios are available on the council website.

The council elected its 2016-17 officers. Their terms begin in June, when president-elect Clayton Johnson (College of Engineering) moves into the president role. The incoming officers are:

A collaboration of top-tier research institutions, the UIA has four objectives:  producing more graduates, graduating more students across the socioeconomic spectrum, sharing data and innovating together.

Since its inception, UIA members have increased the number of degrees awarded to low-income students (defined as those eligible for Pell Grants). Collectively, from 2012-13 to 2014-15, UIA members graduated 3 percent more low-income students. Iowa State was well above the norm during that period, raising the number of Pell-eligible graduates from 952 to 1,292 -- a near 36 percent increase.

The alliance universities will give special attention to predictive analytics over the next few years. With an $8.9 million U.S. Department of Education grant, the universities, led by Georgia State University, Atlanta, will study the impact of analytics-based advising on student success.

An advising analytics study already is underway at Iowa State. Since last fall, advisers in selected departments have been piloting use of a software program that analyzes 10 years of Iowa State data to predict current students' chances of graduating in their chosen majors.

Early results appear promising and, next fall, all ISU advisers will have access to the analytics program for their advisees.

"This year, the UIA will focus on using predictive analytics to enhance success of low-income and first-generation students through more intensive advising interventions," said Steve Freeman, University Professor in agricultural and biosystems engineering and Iowa State's UIA liaison. "We'll begin tracking students that begin their Iowa State careers in fall 2016 and by following their progress over the next three years, we will be able to provide research-based evidence of the impact of predictive analytics and the use of the data to enhance student success.

"In addition to these large projects, we have tweaked some of our student success initiatives based on the best practices from other UIA schools," Freeman said. "We are leveraging the collaborative nature of the UIA to improve practices at Iowa State that not only impact the target population of low-income students, but enhance student success for all students."

The Brunnier will be blooming March 25-27 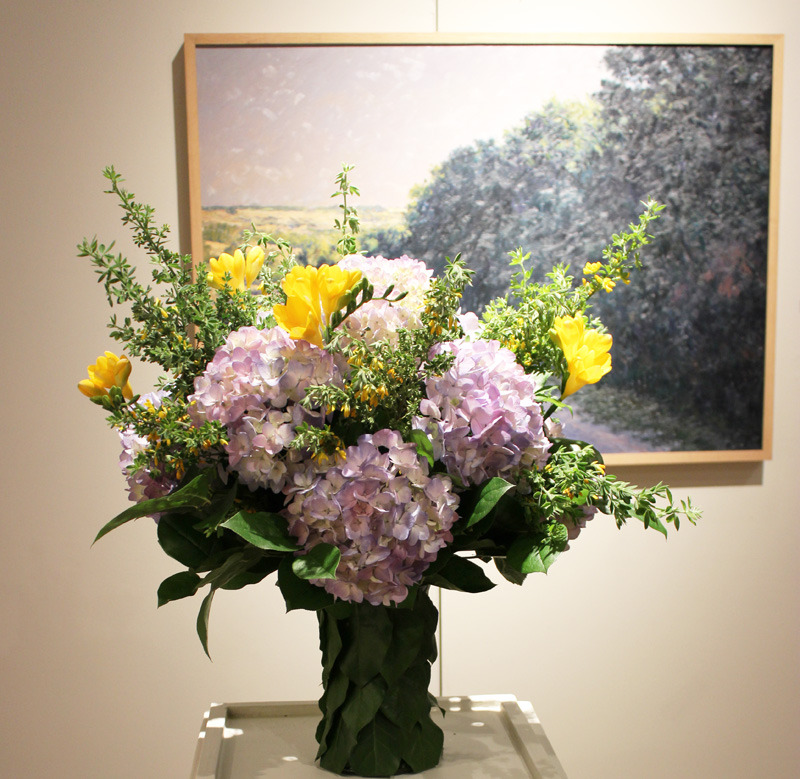 Signs of spring are beginning to appear, but the season will be well underway at the Brunnier Art Museum during the eighth annual "Brunnier in Bloom" exhibition, March 25-27. The event is free and open to the public.

The show opens Friday, March 25, with a Flowers After Hours reception (6-8 p.m.).  Visitors will hear live music by the Britches and Hose Ukulele Club, mingle with the floral artists and vote for the People's Choice award. A cash bar also will be available.

The exhibition continues Saturday and Sunday with the Weekend Showcase (11 a.m.-4 p.m., both days). Bring the kids and let them work on crafts while you browse the floral displays. Raffle tickets for prizes from Raygun, Portobello Road, Reiman Gardens, Massage Heights, the Iowa State Center and more will be available for purchase throughout the weekend. Proceeds will benefit University Museums' educational programming. Visitors also will receive half-price admission passes to Reiman Gardens, good March 25-27.