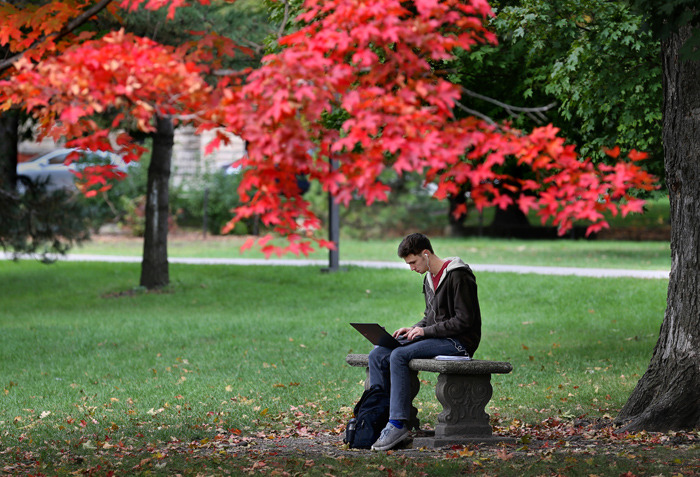 Joe Richards, a senior English major from Urbandale, preps for class Tuesday morning on a central campus bench -- his "favorite spot on campus between classes," he said. Photo by Christopher Gannon.

By Rob Schweers, Office of the Senior Vice President and Provost
October 08

The search for the next dean of the College of Human Sciences is underway. Senior vice president and provost Jonathan Wickert has identified a search committee to seek a successor to Pam White, who in September announced her retirement plans for next summer.

Search committee co-chairs are Cathann Kress, vice president for Extension and Outreach and professor in the School of Education, and Wendy Wintersteen, dean of the College of Agriculture and Life Sciences. Questions regarding the search and nominations for the position may be submitted to Kress or Wintersteen.

The committee will start its work immediately. It also has scheduled two open forums in the coming weeks to solicit input from the university community on the search:

Locations for the forums will be announced soon.

Additional members of the search committee are:

Julie Johnston, executive assistant in the provost's office, will assist the committee with its work.

A national search is underway to hire Iowa State's next senior vice president for student affairs. President Steven Leath has named a 16-member search committee that includes administrators, staff, faculty and students, as well as an Ames community member.

Leading the search committee are vice president for economic development and business engagement Mike Crum and senior associate athletics director David Harris. The committee is assisted by the Massachusetts-based executive search firm, The Spelman and Johnson Group, which has been involved in previous ISU administrative searches.

The senior VP for student affairs post is a professional and scientific position. More information about the responsibilities and applicant qualifications is available on the ISU Jobs site.

To be ensured consideration, applications should be submitted electronically by Nov. 2 on The Spelman and Johnson Group's current searches website. Nominations may be emailed to Mark Hall, mah@spelmanandjohnson.com, or to Crum or Harris.

Crum said the search timeline places campus interviews for the finalists soon after the start of spring semester.

Tammy Michel, program coordinator in the president's office, is assisting the search committee.

Last month, senior vice president for student affairs Tom Hill announced his plans to retire at the end of this calendar year. Hill has led the student affairs division since August 1997. He will continue to serve as a policy adviser to Leath on student experience issues and as Iowa State's representative on the NCAA Division I Committee on Infractions. His committee term runs through July 2016.

University teams looking to raise $1,000 to $10,000 have a new place to turn -- a crowdfunding platform set up exclusively for Iowa State.

FundISU is managed by the ISU Foundation. But teams will run their own fundraising efforts, said Mary Evanson, the foundation's senior director of annual and special gifts. The teams will set up crowdfunding sites, cultivate supporters and publicize their campaigns.

Crowdfunding is a popular fundraising tactic that focuses on seeking small gifts from lots of people rather than large gifts from a few. Generally, the Internet and particularly, social media, are big players in crowdfunding campaigns.

Large crowdfunding platforms abound on the Internet. However, Evanson noted that FundISU, offers these benefits to university fundraisers:

FundISU's first fundraising effort is for Studio Andino, an interdisciplinary design studio in Peru that brings together students from Iowa State and the Peruvian University of Applied Sciences, Lima, to work on projects in several communities in Peru. The Iowa State team, led by associate professor of architecture Clare Cardinal-Pett, sought to raise by Oct. 15 $7,000 to fund materials and tools, transportation, food and water for students and other expenses associated with the design-build projects. The team hit its goal Oct. 7. Additional funds will help reduce the cost of student travel to Peru.

Through crowdfunding, Iowa State can reach beyond its current alumni and donor base, Evanson said.

"Faculty, staff and students dip into their own networks to fund ISU projects," she added. "Long-term, we hope some of these donors develop an affinity for FundISU site and for giving to Iowa State."

FundISU welcomes applications from faculty, staff and student teams with at least six members. Those interested in trying FundISU should read the Q&A and contact Evanson at (866) 419-6768, isufoundation@foundation.iastate.edu.

The ISU Foundation purchased the FundISU platform from ScaleFunder, a crowdfunding operation for educational institutions. ScaleFunder is part of Cedar Rapids-based Ruffalo Noel Levitz, which provides services, software and consulting for higher education management and fundraising.

The view from the sidewalk, captured one step at a time 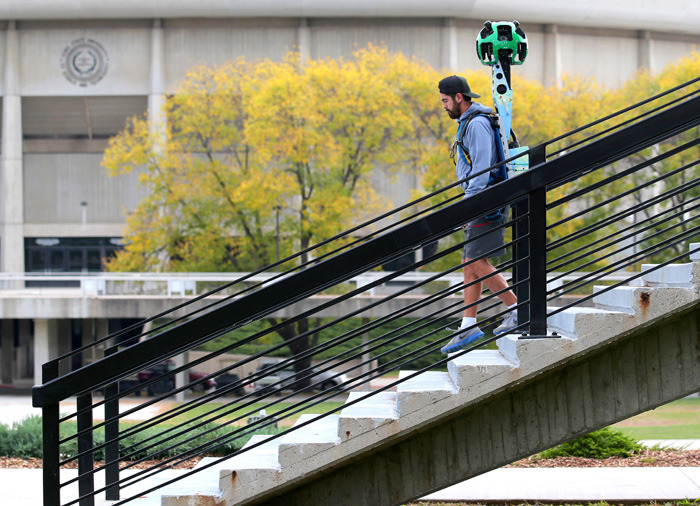 Google Maps "trekker" Alberto Elias (above) moves through the Iowa State Center courtyard Monday, recording 360-degree imagery from a 40-pound video system mounted on a back harness. A Google team worked on campus for two days, recording both street views from a vehicle and sidewalk views captured by Elias.

For a new Google Maps "see inside" option for what it terms "iconic locations," Elias also walked the perimeter of the field at Jack Trice Stadium (below). When Google Maps updates the Iowa State campus views -- sometime in the next few months -- web viewers will be able to enjoy a quick tour of the renovated stadium. The "see inside" feature is intended to "allow people to really get a sense of the character of the place," according to a Google spokewoman. 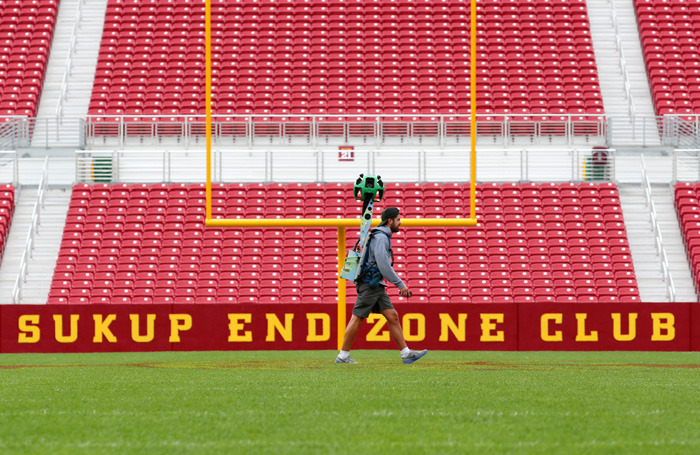 Council receives an update on performance pay use

Members of the Professional and Scientific Council will vote next month on three motions introduced Oct. 7 by its policies and procedures committee. The motions endorse policies in development that cover the use of electronic cigarettes, drones and video cameras on campus, respectively. Public input is being accepted by email through Nov. 16 for the policies, which all go into effect Jan. 1, 2016.

Two of the council motions endorse (with no suggested edits):

The third motion approves -- with recommended changes -- a proposed policy for administrative use of video cameras. The policy provides guidelines primarily for crime prevention, public spaces and customer service. The committee's recommended changes for the draft policy further clarify some of the requirements contained in the guidelines document.

Councilors will vote on the motions at their Nov. 5 meeting.

Emma Houghton, director in university human resources, provided an overview of the extra-meritorious performance pay program (doc) that was implemented in 2008 and revised in 2011. The program awards one-time payments for P&S employees who perform beyond the scope of their duties. The payments do not become part of an employee's base salary. Examples include work on special projects or major initiatives.

"The program is not intended to be used in lieu of salary paid yearly," Houghton said.

She reported that 76 employees were rewarded through the program in the fiscal year that ended June 30, 2015. The awards ranged from $500 to $10,000, with a $2,583 average. The College of Engineering (12) and vice president of business and finance office (11) were the top units to utilize the program in FY15.

Houghton said a review of the program guidelines is being planned.

"One of the major tasks that I do see is the differences in how it's applied across each [unit]," she said. 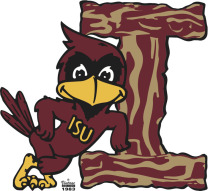 If you haven't purchased tickets to the third annual ISU Bacon Expo, the mouth-watering smell of sizzling bacon wafting through Ames' atmosphere on Saturday surely will draw you in.

This year's expo loses the punch cards. That means visitors can enjoy as many bacon samples as their stomachs can handle, without paying extra. Any bacon left at the end of the day will be donated to Food at First. Proceeds from the event also will support the Puppy Jake Foundation and the Wounded Warrior Project.

Visitors will enjoy live entertainment, a live pig display, educational activities and information booths about the pork industry. Attendees also will learn about the "Gate-to-Plate" message, showcasing how pork gets from the farm to the dinner plate. Bacon Expo and vendor merchandise will be available for purchase. 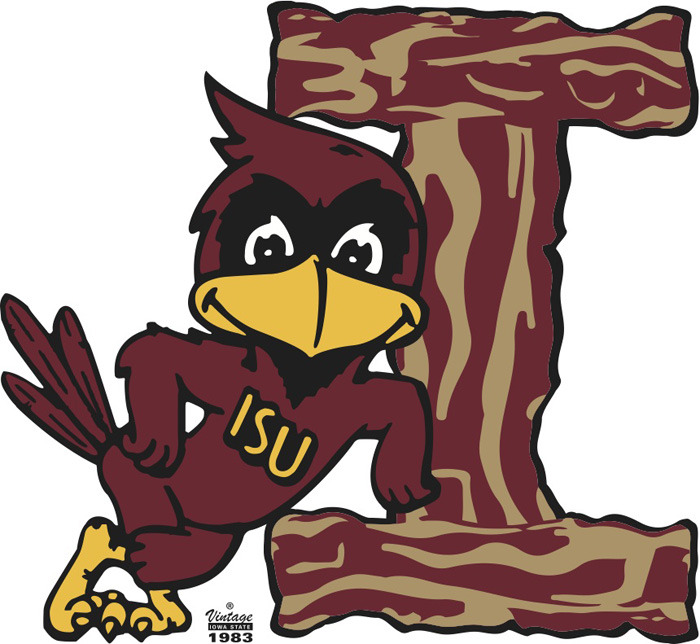