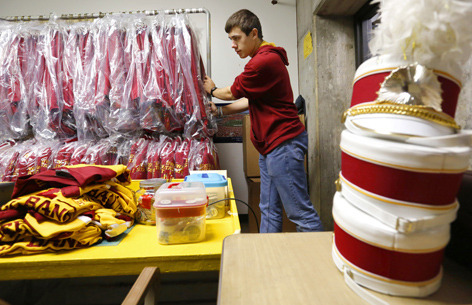 Jonny Schmidt, a clarinetist in the Iowa State University Cyclone Football Varsity Marching Band, moved some of the 350 freshly dry cleaned band uniforms to a Music Hall storage room on Monday. The uniforms will be assigned to student musicians when the band membership is finalized in August. Photo by Christopher Gannon.

Beginning today, the entire Iowa State student body will be asked to participate in a voluntary survey as part of a national research effort led by the Association of American Universities. ISU is one of 27 AAU member institutions participating in the sexual assault campus climate study.

"ISU is conducting the survey to increase our understanding of the issues surrounding sexual assaults and violence in order to develop strategies to end these issues on our campus," said Robin Kelley, equal opportunity director. "The survey results will help strengthen current policies and practices, and guide new practices and policies to better promote a safe, secure and welcoming campus environment."

The AAU contracted with Westat, a national research firm based in Rockville, Maryland, to conduct the survey. Students have three weeks (April 2-23) to participate; all responses are confidential. The estimated completion time is 20 to 30 minutes. Westat will prepare a cumulative report of results, as well as campus data for participating institutions.

Students received an email from President Steven Leath on March 5, urging them to look for and complete the online survey. A series of incentives, ads and reminders also are planned to encourage participation.

The Professional and Scientific Council unanimously approved a draft policy currently available for public comment. The assistance animals on campus policy provides guidelines for their use on university property and in campus buildings. Assistance animals are defined as service and emotional support (for example, therapy) animals, not pets.

The council's motion, approved at the group's April 1 meeting, included a recommendation to provide a definition of the term "housing unit" used in the draft policy. Public input on the policy must be submitted to policy@iastate.edu by April 21.

Julie Nuter, associate vice president for university human resources, updated council members on three items, including the results of a survey about P&S search committees -- part of the state Board of Regents' efficiency efforts -- that is available on the UHR website. Two other reports -- a P&S human capital inventory, and a child care feasibility study -- are complete and will be shared later this month.

"We focused on areas that were really tied to the university's mission around science and technology," Nuter said. "We looked at research positions, ag specialist positions, IT system positions, FP&M engineer positions and the environmental health and safety positions."

She said the child care feasibility study revealed demand for another university child care center and information is being gathered for a proposed facility that is part of the ISU Research Park expansion.

The P&S Council will host two seminars this month. They are free and open to the public.

President-elect Tera Lawson said the revised council constitution was approved by a majority of all P&S staff who voted during the online election period. The constitution, which includes more general language and guidelines, went into immediate effect. Specific language was moved to the council's rules and bylaws, which were approved in February.

Iowa State students flocked to study abroad programs in record numbers over the past year. A record 1,812 students have engaged in study, volunteer and service learning opportunities abroad between summer 2014 and spring 2015.

Most of those students -- 1,633 -- will earn academic credits. That's a 20 percent increase from the previous year.

"The numbers indicate that students are coming to Iowa State with the intention to study abroad," said Trevor Nelson, director of the Study Abroad Center. "It's exciting to me that even during difficult economic times, or times when news events create apprehensions among parents, our students still are going."

Students can participate in a variety of programs -- faculty-led trips related to specific disciplines, college offerings like the College of Design's flagship Rome Program or exchanges, in which students study and earn transfer credits at other institutions.  Additionally, students leave campus for internships and to engage in service learning projects. They might go abroad, for example, as part of a choir or an Engineers Without Borders project.

Not all experiences abroad translate into academic credits, but they certainly transfer into meaningful life experiences through interactions with communities and people around the world, Nelson said.

He said students' experiences abroad don't necessarily prolong their time to graduation. Data shows that Iowa State students who study abroad have higher four-year graduation rates than those who don't.

He advises those who'd like to study abroad to get in touch with their academic advisers and the Study Abroad Center or college study abroad office early to explore options. Freshmen and sophomores have much more flexibility in ISU course selections than upperclassmen, he said. 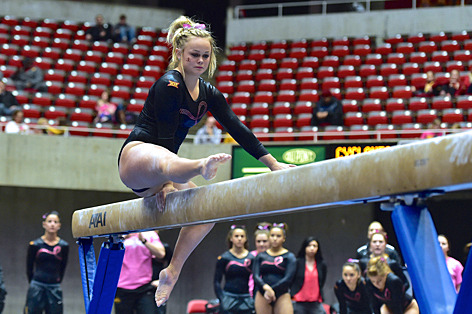 Six of the nation's top gymnastics teams, including host Iowa State, will be battling for a spot in the NCAA Championships on Saturday, April 4. A handful of individuals from nonqualifying schools also will compete.

Unranked ISU and Michigan State join No. 4 Louisiana State, No. 9 Nebraska, No. 16 Denver and No. 23 Washington at the NCAA Ames Regional in Hilton Coliseum. Two teams will advance to the championships, April 17-19 in Fort Worth, Texas. The top two individual finishers in each event also advance if their teams do not.

ISU is one of six teams competing in the NCAA regional meet at Hilton Coliseum.