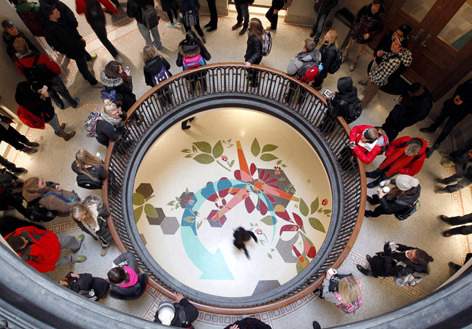 Students gather in the Curtiss Hall first floor foyer Monday morning, waiting to move into the auditorium for a first-of-the-semester class. Photo by Christopher Gannon.

"UHR is destined to become an enhanced partner with departments and units across campus, helping them to achieve their goals," Leath said. "Human resources' role in attracting, developing and retaining talented people is increasingly important to university success. As we look to UHR for additional services and efficiencies that closely align with our priorities, it makes sense to bring the unit into the president's office."

Among efficiencies UHR will explore in coming months are recommendations from the state Board of Regents' Transparent Inclusive Efficiency Review. A key recommendation called for reviewing and streamlining UHR's decentralized services model.

Since assuming leadership of UHR in December 2013, Nuter led the overhaul of the online hiring system. She says she focuses on two things: how to attract, retain, develop and reward talent, and support leaders, faculty and staff in being successful in the work they do.

"I'm pleased to have Julie on board," Leath said. "She has the enthusiasm and expertise to build and adapt human resources to better serve all units across campus." 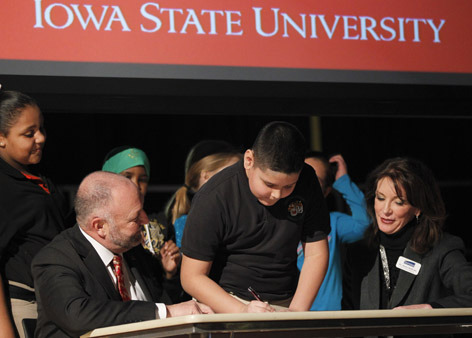 Iowa State and the Des Moines public school district are working with families and neighborhood organizations to make college more accessible and affordable for students at King Elementary and Moulton Extended Learning Center. On Jan. 13, President Steven Leath visited Moulton to sign the "ISU 4U Promise" memorandum of agreement.

The partnership will provide educational and teaching assistance as well as tuition awards for the ISU 4U Promise program. To qualify for an award, King and Moulton students must meet the following criteria:

Tuition awards will vary, based on length of enrollment at King or Moulton school. For example, one year enrolled garners a 20 percent tuition award; students enrolled five or more years would receive a full tuition award.

Students who qualify after completing elementary school then must enroll in coursework during middle and high school necessary to qualify for admission to Iowa State, complete the ACT test as a junior and apply for admission to ISU during their senior year.

"The ISU 4U Promise embodies Iowa State University’s land-grant principle that a college education should be accessible and affordable," Leath said. "A degree from Iowa State holds great value, and we believe these students will bring great value to our university.”

Read more about the ISU 4U Promise.

An influenza primer for employees

The dry, rough skin on your hands may be a testament to your hand-washing diligence this winter. And perhaps you're dining on chicken soup four times a week to keep your immune system Teflon-coated. But, let's face it, we're a campus community of 40,000-plus and not everyone has your stamina. So, as we wade into the heart of the 2015 flu season, Inside gathered the following information to guide your flu-battling efforts.

If you missed the employee flu vaccine clinic in October, you're out of luck on this free option. Occupational Medicine has no more vaccine to distribute, but local pharmacies still are offering flu shots. This year's vaccine was produced prior to the arrival of a viral strain affecting people this season (an H3N2 mutant). However, state health officials still encourage people to be vaccinated.

To protect yourself and others from the flu every day:

Regarding that last point, University Human Resources this week updated and posted an Influenza FAQ for university employees that addresses all kinds of questions – about staying home, working from home, returning to work, for example -- for employees and supervisors.

Additionally, a provost's office memo reminded department chairs of Iowa State's class attendance policy (PDF) for students dealing with viral illnesses. Recognizing that students with flu symptoms who avoid class and work environments is for the public good, faculty should not ask students to get a class excuse note from the Thielen Student Health Center for classes missed due to the flu.

The staff of the student health center is coordinating an influenza education campaign among students that includes emails, social media posts, ads in the ISU Daily, a Cy-inspired poster (PDF) in the residence halls, and a 99-second video produced with ISU News Service.

ISU environmental health and safety developed a hand-washing poster (PDF) that should be showing up in restrooms around campus as building services staff receive and post copies.

Professional and scientific staff will have an opportunity to vote for more than their P&S Council representatives in March. An amended version of the council's constitution, approved at the group's Jan. 8 meeting, also will be on the ballot.

"[The revised constitution] will be sent university-wide to all P&S staff by the end of the month so they have 30 days to review it prior to the vote, which will be held at the same time as councilor elections," said president-elect Tera Lawson.

The revised constitution (PDF) includes more general language and guidelines, with details moved to the council's rules and bylaws document.

Proposed revisions to the rules and bylaws (PDF) were introduced and will be voted on at the Feb. 5 council meeting. Bylaws changes include:

ESPN's "College GameDay" makes its first trip to Ames, airing its two-hour national broadcast from inside Hilton Coliseum on Jan. 17 (9-11 a.m.). The event is free and open to the public.

Admission to the event will be at the north doors only, beginning at 8 a.m. All seating is general admission. Fans who wish to bring signs (no poles or sticks allowed) must get them approved by ESPN representatives. The University Book Store has two exclusive "GameDay" T-shirt designs ($16.99 each) to mark the event.

Limited concessions will be available and Cy's Locker Room will be open on the concourse. ESPN and show sponsor State Farm will provide giveaways for attendees. Following the broadcast, fans will be asked to clear the building. Vehicles must be moved from the parking lots by noon.

Doors will reopen to ticketholders at 6 p.m. for the Iowa State-Kansas men's basketball game. ESPN will air a pregame show at 7 p.m., with tipoff at 8 p.m.

Cyclone Cinema, hosted by the Student Union Board, has announced its spring lineup. Movie showings begin tonight (Jan. 15) and continue through the last weekend of April, with a short hiatus during spring break.

New this spring is that the two Sunday showings will feature the open caption version of that week's film, which provides readable text of the dialogue on the screen, as well as descriptions of music and sound effects.

Most of the film series details remain unchanged: Admission is free and the public is welcome. Each recent-release movie title runs for four nights (Thursday through Sunday), with two shows each night at 7 and 10 p.m. in 101 Carver. Shows start promptly, so be on time. Movie goers can purchase popcorn and candy ($2), and bottled soda and water ($1). 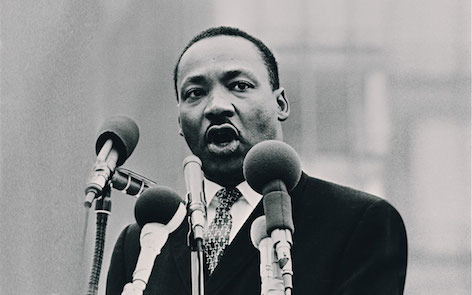 Martin Luther King Jr. Day is Jan. 19, and the campus community is commemorating King's civil rights legacy with several events during January. All events are free and open to the public.

The geographic information systems (GIS) facility is holding a Martin Luther King Jr. Day of Service event on Jan. 19 (10 a.m.-noon; 1-3 p.m., 206 Durham). Volunteers will help create crowd-sourced maps of the world to help with disaster relief efforts. All are invited to participate; no experience is required. Lunch is provided. More information, including registration details, is available online.