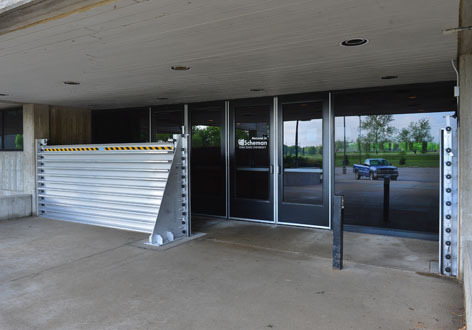 Partial installation of the flood gate at the north entrance of the Scheman Building. Photo by Bob Elbert.

As river levels continued to rise last week and the forecast called for additional rain, flood gates were installed at the Scheman Building, Hilton Coliseum and the Maple-Willow-Larch residence halls. Equipment also was relocated at Veenker Memorial Golf Course and the Lied Recreation Center was closed (twice) for sandbagging work.

The projected rains diminished and the flood warnings were allowed to expire, but university officials were able to use the threat to evaluate their preparations in real time. 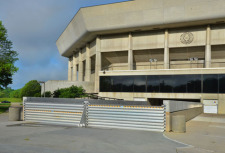 Flood gates on the east side of Hilton Coliseum. Photo by Bob Elbert.

"We do a practice drill every spring, but this is the first time we truly used the flood gates," said Dave Miller, associate vice president for facilities. "The time to put the panels in place is probably 80 percent less time than the time it would take to sandbag. That's a real blessing, given the quick up and down of Squaw Creek."

The university remained open and activities continued as scheduled throughout the preparations. Some of the flood gates still are in place, Miller said, and the sandbags remain on standby at the Lied Center.

"They will stay up until the current threat is passed or until building activity levels and occupancy necessitates having more building exits available for egress," Miller said.

Four research teams will receive up to $4.5 million over three years to pursue competitive grants to fund large-scale, multidisciplinary research efforts of national and international importance.

The grants are part of the Presidential Initiative for Interdisciplinary Research, a program launched by president Steven Leath to support research efforts that could lead to major advances, discoveries and technologies.

Leath said he was pleased with the enthusiastic response to the initiative (51 teams vied for funds through the initiative) and the quality of the proposals.

"These proposals are just what we wanted to see," Leath said. "They pull together talented researchers from our university, other institutions, national labs and industry to tackle some of the grand challenges facing our world. I believe we will see real progress coming out of these scientific collaborations.

"The projects also will further the excellence of Iowa State University, building upon the strengths of the university and expanding the overall research structure," he added.

During the funding period, project teams will submit multiple proposals for external large-scale research grants. Successful proposals at that scale are a time-consuming venture. Pursuit funds can be used for such things as teaching releases, hiring consultants to add value to teams and holding workshops to strengthen connections among ISU and external partners.

Three projects received awards under a smaller, proof-of-concept category. These awards provide pursuit funds for emerging research areas that are more limited in scope or require proof of concept before investigators can pursue larger funding. Each project will receive up to $100,000 for one year.

"This initiative is intended to create a new culture of interdisciplinary and collaborative research at Iowa State, a culture that encourages thinking big," Leath said in his installation address last fall.

The President's Committee for Institutional Excellence, with assistance from experts in industry, higher education and government laboratories, led the review process.

Faculty and professional and scientific staff who receive satisfactory performance evaluations will see a salary increase on July 1 of at least 1 percent (1.5 percent for those with salaries of $60,000 or less).

Iowa State's 3-year-old salary policy, which covers faculty, P&S staff, employees on contract and post docs, applies to all funding sources. It requires university leaders each year to set minimum and maximum increases (PDF) for employees receiving a satisfactory – or better – performance evaluation. For FY14, those parameters are:

Read about the special allocation intended to boost humanities salaries.

Assistant vice president for financial planning and budgets Dave Biedenbach said president Steven Leath recommended the two minimums last year to recognize that cost-of-living increases have a more significant effect on employees with smaller salaries. Leath recommended the same structure this year, but noted that it shouldn't be considered a standard practice for future years.

Biedenbach said the proposed FY14 General Fund budget includes about $7.3 million for performance-based salary increases. That figure is about 2.5 percent of the current General Fund payroll for faculty and P&S staff. Salary increase decisions will be based on available funds in each unit.

Salary increases also may help correct external market equity issues or internal disparity among like positions. Total increases above 5 percent are permissible, but as outlined in the salary policy, require approval from the appropriate senior vice president. The form (PDF) supervisors should use to request a salary increase above 5 percent is on the Human Resource Services website.

Salary increases for the FY14 faculty promotions ($6,500 for Distinguished Professors, $6,000 for University and Morrill Professors, $5,500 for full professors and $4,600 for associate professors) and increases due to P&S reclassifications don't replace or eliminate performance-based increases.

Biedenbach said the proposed FY14 budget includes an anticipated 5 percent increase in the university's cost for the ISU Plan when the new benefits year begins Feb. 1, 2014. If projected plan costs prove higher than that, employee participants could see a modest increase in the premiums they pay. An employee wellness component under development also could impact costs, depending on how it's structured.

The state's new contract with the American Federation of State, County and Municipal Employees (AFSCME) Iowa chapter, which covers nearly all university merit employees, calls for no salary increase on July 1. Merit employees who haven't reached the maximum salary in their pay grades will receive a 4.5 percent increase on their anniversary date at the university.

Next year's salary lines for faculty in the humanities are getting special attention and dollars from the ISU administration.

President Steven Leath, provost Jonathan Wickert and Liberal Arts and Sciences dean Beate Schmittmann have allocated $450,000, collectively, toward humanities salaries and benefits. The allocations, which are permanent, are intended to bring the average salaries of tenured and tenure-track Iowa State humanities faculty closer to salaries of their peers at other institutions.

The humanities comprise six departments -- English, the Greenlee School of Journalism and Communication, history, music and theatre, philosophy and religious studies, and world languages and cultures.

Average salaries of tenured and tenure-track faculty in these departments are significantly below peer averages; in some cases, more than 20 percent below.

"Humanities departments play a huge role in providing our students with many of the skills employers prize so highly in employees," Schmittmann said. "These include communication skills, critical thinking and an understanding of the cultural and historical contexts in which Americans and people around the world live."

Schmittmann said faculty representatives and department chairs in the humanities have long advocated for a systematic way to address the salary gap with their peers, and she shared these concerns with university leaders. She thanked president Leath and senior vice president and provost Jonathan Wickert for making the initiative possible.

"We pride ourselves on the student experience we offer at Iowa State," Leath said. "Humanities are key to that experience and to our determination to turn out students who are broadly educated and ready for their next venture."

Schmittmann noted that the additional salary funds will not be used for across-the-board increases.

"This is an opportunity to show how much we value our most effective faculty -- the productive scholars, the engaged teachers and the faculty who strengthen our community through their service." 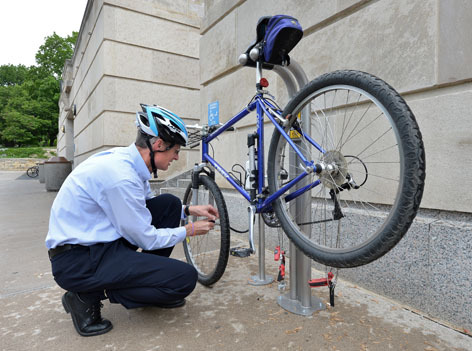 Campus bikers can air their tires and make repairs at a new bike station strategically placed near the bike rack on the Memorial Union's west side. The stainless steel station includes a mount that lifts bikes up for easy access, and provides eight bicycle tools and a tire pump. All are securely bolted or cabled to prevent theft.

The project was a joint effort, funded by the Government of the Student Body and the Inter Residence Hall Association. Products of Minneapolis-based Bike Fixation, the repair stand with tools costs roughly $1,000, and the pump is about $750. An additional stand-alone pump will be installed near Parks Library later this summer. Photo by Bob Elbert.

The board approved Iowa State's FY14 salary parameters for faculty, professional and scientific staff and postdoctorates. Minimum increases for satisfactory or better performance evaluations are 1.5 percent for employees with a salary of $60,000 or less, and 1 percent for those who earn more than $60,000. The P&S pay matrix will be raised 1.25 percent to reflect market changes. Merit employees are subject to collective bargaining agreements made with the state.

The board authorized the creation of a branch office in Uganda for the College of Agriculture and Life Sciences' Center for Sustainable Rural Livelihoods. With oversight by the university's global programs board, the ISU Uganda Program will seek registration as a nongovernmental organization (NGO) in the country to continue service learning programs, outreach, research and internship and collaborative efforts.

"This is a program that has been in place for over a decade and has strong philanthropic support," said president Steven Leath. "It gives us an opportunity to show our global impact, where we can make a real difference in the world -- especially in developing countries."

This would not be a first for the university. Tanaka said the College of Design's Rome program established NGO status with board approval in 1999.

Bids were accepted for the sale and issuance of refunding bonds, taking advantage of savings through better interest rates. Iowa State bonds included:

In his report to the regents, Leath applauded the more than 3,700 students who graduated last month, noting that a high percentage already are employed or committed to graduate studies. He also pointed out that some graduating students returned to campus to help prepare for possible flooding due to heavy rains and recognized junior Nicole Donato, who received the ROTC Medal of Heroism for life-saving acts at the scene of a car accident.

“It really makes you feel good to see that in our students,” he said.

Leath told the regents he was pleased to see “great support” for Iowa State across Iowa during the 2013 legislative session, and thanked the legislature for its support, particularly the $12 million appropriation for expansion of the ISU Research Park.

Additional Iowa State agenda items approved by the board, include: