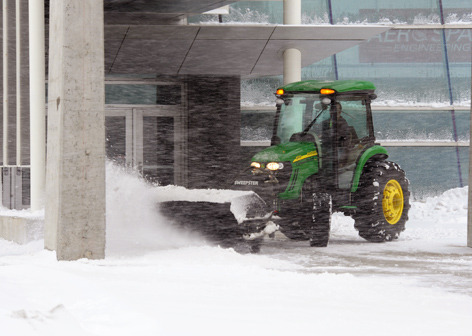 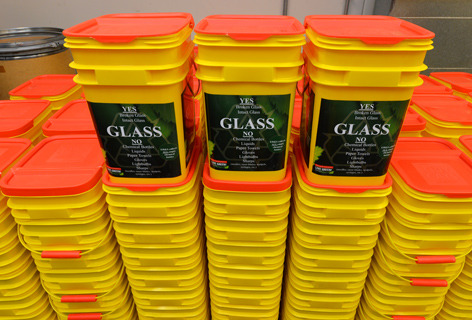 These stacks of Tidy Cats cat litter containers, donated by the company and recycled by Iowa pet shelters, await distribution to research labs in 12 campus buildings. Photo by Bob Elbert.

The request on campus last July for red-lidded Tidy Cats cat litter containers netted more than 50 buckets for a glass recycling pilot. It also got the attention of Purina, the owner of the Tidy Cats brand, which donated more than 1,000 buckets to the cause.

The yellow, plastic five-gallon buckets are part of the university's effort to help the city of Ames recycle glass. Keeping glass out of the garbage stream prevents mechanical damage at both the city's resource recovery plant and power plant.

More than 500 Tidy Cats buckets have been dressed with an informational sticker and will be distributed to labs in 12 buildings -- so far -- that are participating in this more directed glass recycling effort. For years, Iowa State students and researchers have disposed of lab glass in designated cardboard containers. This separation, however, was a courtesy to save custodial staff's hands from lacerations rather than a recycling effort, and ultimately the glass wound up with other trash bound for the resource recovery plant.

With some 1,800 labs, Iowa State discards a lot of broken or used glassware, including pipettes, slides and petri dishes. For now, the revised laboratory glass recycling program is a voluntary one. Buildings may opt in by contacting ISU recycling coordinator Sue Mallas, 294-0692.

Director of sustainability Merry Rankin said glass has been added to the list of recycled materials for which the university actually is keeping count.

"We're starting to measure how much glass we recycle and we have developed this more formal system for doing so, including resources to keep it going," she said.

Staff in the environmental health and safety department have prepared a 3-minute video on laboratory glass recycling to share some do's and don'ts with lab users. The lab buckets will be emptied into large yellow bins provided by the city and stored on building loading docks. Campus services staff take the large bins to the resource recovery plant once a week, where the city pays Iowa State (currently $45 per ton) for the waste glass.

The tale of the buckets

Amanda Jacobson, an intern in the university's Live Green program last summer, saw the virtue in the Tidy Cats containers: They are the right size, have a snap-tight lid that opens easily, promote the school colors, have a carrying handle and create a second use for containers destined themselves for the trash.

Tidy Cats donated 1,056 pails of the litter to Raccoon Valley Animal Sanctuary and Rescue, West Des Moines, which in turn shared them with 18 shelters throughout Iowa. The stipulation was that, once empty, the containers would be donated to Iowa State. So far, more than 500 empty pails have been returned to campus, with more arriving almost weekly.

ISU Day at the Capitol 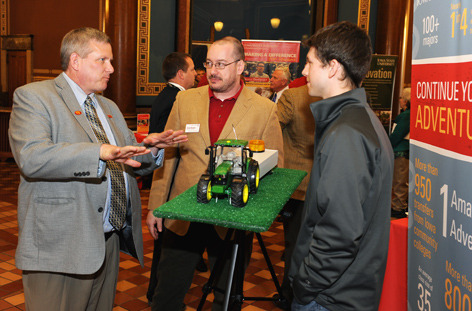 About 20 campus units participated in the day, designed as a venue for legislators to learn more about Iowa State. Photo by Bob Elbert.

Magill served as special assistant to the acting assistant administrator in the Bureau for Management during the past year. Her previous posts include associate director in the department of campus programs at the University of Illinois at Chicago; senior admissions counselor at Iowa State; outreach coordinator and volunteer liaison in the Iowa governor's office; clerk in the Iowa House of Representatives; and executive director of the Iowa Cultural Coalition.

"I'm very pleased to welcome Sophia Magill back to Iowa State," Lackey said. "Eight years ago, she was on campus serving as Government of the Student Body president. Since then, she has gained valuable professional experience in government, higher education and the nonprofit sector -- all while continuing to support Iowa State through leadership in alumni activities."

Magill received a bachelor of arts degree in political sciences (2005) from Iowa State and a master of public administration (2010) from the University of Illinois at Chicago.

Inside Update will arrive in your inbox next Thursday faster and with a slightly different look. The changes result from the retirement of Iowa State's 11-year-old mass mailing system known as BIGMAIL.

Next week's Update will be sent via Constant Contact, a commercial emailing firm. A number of campus units have been using Constant Contact for mass mailings for some time.

If you have any questions, concerns or suggestions about the new Update mailing system, send them to update@iastate.edu. 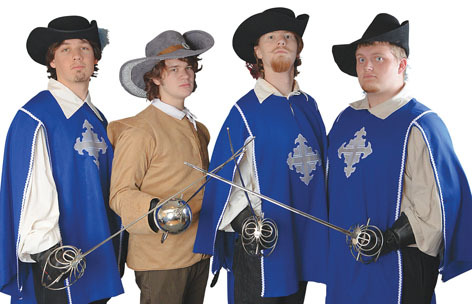 The actors take up their swords in ISU Theatre's production of The Three Musketeers, which lands on the Fisher Theater stage over the next two weekends. Junior Kivan Kirk portrays D'Artagnan (gray hat), a young Frenchman on a quest to become a member of the Musketeers, who serve as the French king's guard. His adventure leads him to the famous trio (in blue) -- Aramis (senior Zack Hackbarth, left), Athos (junior Taylor Sklenar, center) and Porthos (sophomore Colton Brouwer, right). The heroes weave complicated tales of romance and action in this story based on Alexandre Dumas' 1844 novel. Tickets, $16 for adults, $14 for seniors and $8 for students, are available through Ticketmaster. Show times are 7:30 p.m. on Fridays and Saturdays, 2 p.m. on Sundays. Photo by Nancy Thompson.