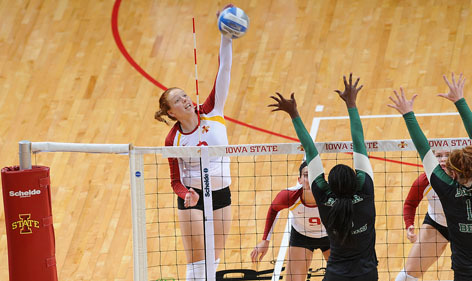 The Cyclone volleyball team will face the Horned Frogs of Texas Christian University Saturday at noon in Hilton Coliseum. TCU is the first of two new Big 12 Conference members to compete in Ames as league foes. TCU (Fort Worth) and West Virginia University (Morgantown) accepted invitations to join the Big 12 in 2011, and opened their inaugural season of league play this fall.

First mentioned Sept. 14 in his installation address, president Steven Leath released this week the details of a funding initiative to support new multidisciplinary research programs that will have a "transformational impact" on the university, the state and the country.

The "pursuit" funds -- dollars that don't support the research itself but rather the preparation of larger-scale research funding proposals -- will be awarded by March to up to three teams. Each team could receive up to $500,000 annually for three years.

"This initiative is intended to create a new culture of interdisciplinary and collaborative research at Iowa State, a culture that encourages 'thinking big,'" Leath said in his installation address.

He said the program will identify research areas that are core to the university and "move them to the next level" to address topics of state and national importance. Successfully competing for large external grants and contracts will help build the university's reputation for innovation, he said.

"I encourage all Iowa State faculty to . . . consider creating teams to take advantage of this new initiative to promote innovation and grow the research enterprise at Iowa State," Leath wrote in a letter to all faculty.

The scale of the Presidential Initiative for Interdisciplinary Research -- and not only the funding level -- sets it apart from other pursuit funding opportunities at Iowa State. In addition to a core group of five to 10 faculty and staff members from multiple academic units, research teams must include partners or collaborators from universities, industry, national laboratories, foundations and other organizations. Over the three years of the program, teams are expected to submit multiple proposals for external large-scale research grants and secure funding that far exceeds their ISU pursuit support. And the proposed research question itself must be "of a scope and complexity" that it demands broad collaboration and appeals to more than one funding agency.

Leath noted that preparing successful grant proposals at that scale is an especially time-consuming venture. According to his letter, emailed to faculty on Tuesday, appropriate uses of pursuit funding would be:

Pursuit funds should not be used to pay for:

The initiative also includes a smaller, proof-of concept program, directed at research areas that are still emerging, more limited in scope or have a higher risk. Pursuit funding grants in the range of $50,000 to $100,000 could be awarded to help such teams also secure collaborative research grants.

Research teams striving for pursuit funding will submit a three-page white paper by Dec. 1. It will include long-term research goals, an outline of research planned and budget, plans for partnership and collaboration with other organizations, and a list of team members and their respective roles. From the white paper submissions, some teams will be invited to prepare full proposals by Feb. 1, 2013. The final awards will be announced by March 1. Leading the review process will be the President's Committee for Institutional Excellence, with assistance from subject experts in industry, higher education and government laboratories.

Two campus forums will be held this fall to provide more information about the initiative and respond to questions from teams interested in submitting white papers. Forum details will be shared soon. Questions also may be directed to Tahira Hira, senior policy adviser to the president, 294-7239. 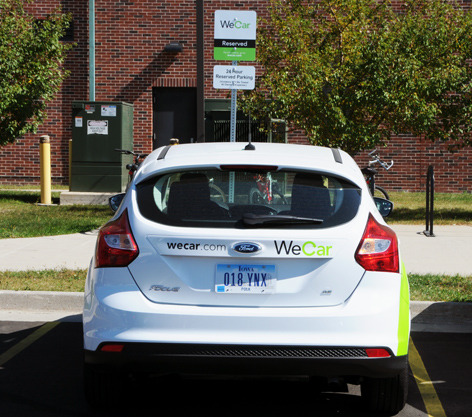 Iowa State's current contract with Enterprise's WeCar program is for two cars. This reserved spot is on the west side of Martin Hall. Photo by Bob Elbert.

WeCar, a rent-by-the-hour driving option, begins its second year on campus next month. A division of the Enterprise car rental company, WeCar targets college students who don't own cars; however university employees are welcome to join, too. This is the second of a three-year contract between Enterprise and Iowa State.

All WeCar business is conducted online, including membership and reservations. Members receive an electronic key card, which, when swiped across the WeCar windshield, unlocks and locks the doors. The ignition key and a gas card are stored in the vehicle. Members reserve time online and must return the vehicle on time to the campus location from which they borrowed it.

"Word is spreading and people are amazed at how easy it is to use the system. It's all technology-driven," said ISU senior and WeCar marketing intern Jessica Francis. Membership at Iowa State has more than doubled this year over last, to more than 100 people so far, she said. International students especially are interested in a car-share option.

WeCar vehicles are designed for personal use, so the program is different from ISU transportation services, which leases vehicles for university-sponsored travel.

Join for free before Nov. 1

For anyone – student or employee -- who joins by Oct. 31, the one-time $20 application fee will be waived and the $35 annual membership fee returned to you in WeCar rental credit. The two-car fleet at Iowa State features fuel-efficient Ford Focus vehicles. One is parked in the lot west of Martin Residence Hall, the other in the RCA driveway on the east side of campus. Francis said a logical spot for a third car would be at the Schilletter-University Village apartment neighborhood north of campus.

The WeCar concept is built around sustainability (shared vehicles means fewer vehicles) and relies on members playing by the rules and meeting deadlines. It's intended to fill the rental car need particularly among 18- to 25-year-olds. Some rental car companies won't rent to them, period; others add steep "underage" fees that make the rental option cost prohibitive.

Membership requires a valid driver's license and a major credit card (to which your rentals are billed).

WeCar rental rates -- which include insurance and fuel -- remain unchanged from a year ago:

"We've had a lot of great things spring from student proposals -- this is one of them," said director of sustainability Merry Rankin. Former student Mark Zikra developed a car-sharing proposal for a class project that became the starting point for discussions about bringing such a program to campus.

The latest spam scam to hit campus arrived in a slightly more polished package than the usual "you've won the lottery" email.

This one, titled "IMPORTANT NOTICE," had an Iowa State nameplate and appeared to be from Jim Davis, vice provost for information technology and chief information officer (CIO).

There were clues it was bogus -- misspellings, a stilted phrase or two and, most importantly, the call to "click here."

"But this one felt different," said the real Jim Davis. "It looked somewhat legitimate and, for many who called our office, appeared to be coming from someone they know."

Additionally, Davis said, the Sept. 20 email started arriving in Iowa State mailboxes at 5:15 p.m., a good ploy for spammers who might want recipients to open it on home networks that are generally less well-protected than the university's. Indeed, shortly after the email made its entry on the ISU network, ITS security specialists found a way to deactivate the link.

The scam, while slightly more sophisticated, had the usual end game: Get you to click and capture your personal info, including logins and passwords.

"The scams will keep coming," Davis said. "It's quite likely that the current scam will be repeated and this time, it will appear to come from someone you know."

Here's how to protect your information: 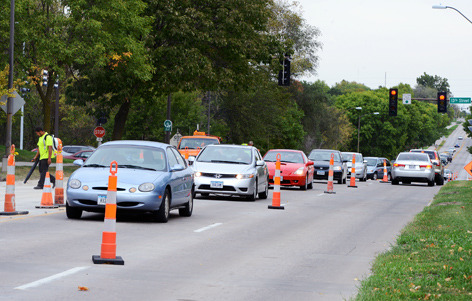 Pavement replacement work in the southbound lanes of Stange Road wrapped up several days ahead of schedule this week and all four lanes of traffic reopened Tuesday afternoon. The pavement work, the last of a summer-long project affecting mostly the north and east sides of campus, had reduced a heavily used, four-block stretch of Stange Road to one lane of traffic in each direction (pictured) since Sept. 10.

Non-supervisory merit employees will get a chance to review and change their benefits during the annual open change period, Oct. 1-Nov. 16.

Information about changes to premiums will be available Oct. 1. Employees can find out more in the open change guide, available on the ISU Benefits website, and in the participation statements, available on AccessPlus.

How to make changes to your benefits

Enrolling in or increasing employer-sponsored life insurance will require a paper form. Employees who wish to enroll in the voluntary contribution health plans (a 20 percent contribution of health plan costs) also must complete a paper form after meeting with a benefits specialist. If you prefer to make all your changes on paper, contact human resource services at 4-4800.

Employees may continue to insure children up to age 26 on their medical, dental and Avesis vision plans for 2013. To qualify, children must be under age 26 on Jan. 1, 2013. Children may be covered even if they are married or have a job with health care benefits. If children already have benefits, the ISU coverage would supplement their primary health plans.

If children turn 26 in 2013, coverage must end Dec. 31, 2013. However, if children are unmarried and enroll as full-time students during the year, they can remain on their parents' ISU health or dental plans until they either get married or stop being full-time students. Remember, there may be tax implications for employees who insure students over age 26.

HRS is hosting an interactive webcast for non-supervisory merit employees Oct. 17 from 9 to 10 a.m. To participate, log on to http://connect.extension.iastate.edu/benefits. At the login page, enter your name under the "Enter as a Guest" heading, then click "Enter Room."

ISU Theatre opens its season with a laugh

Personal relationships are the comedic downfall of the third-rate theater company featured in ISU Theatre's Noises Off production. (Left to right) Kelly Marie Schaefer, Taylor Diles, Taylor Sklenar and Shongedzai Matangira portray the actors in this play within a play. Photo illustration by Nancy Thompson and Mary Bendgen.

In this play within a play, it's the behind-the-scenes action of a sub-par theater company that earns the spotlight. Jealousy and ineptitude are among the obstacles that strain personal relationships among the troupe, taking an obvious toll on the production as it progresses from a bumbling dress rehearsal to full-blown chaos at the end of its run.

Tickets for Noises Off -- $16 adults, $14 seniors and $8 students -- are available through Ticketmaster or at the Stephens Auditorium ticket office. Friday and Saturday shows begin at 7:30 p.m.; Sunday matinees are at 2 p.m.

ISU Theatre opens with a laugh

Personal relationships are the comedic downfall of a third-rate theater company in ISU Theatre's two-weekend run of Noises Off.