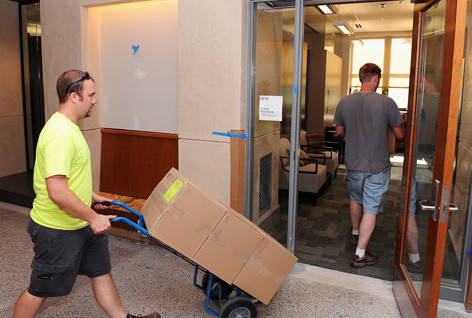 Assisted by a team from campus services, staff of the global programs office in the College of Agriculture and Life Sciences moved into renovated space in the (south) student services wing of Curtiss Hall's ground floor this week. They joined the college's career services unit; and next week the student services staff moves in across the hall.

Elsewhere in Curtiss, other pieces of the renovation will gain momentum this summer, including window replacement, central air conditioning in classrooms, less extensive office renovations and a student commons beneath the auditorium in the east wing. Photos by Bob Elbert. 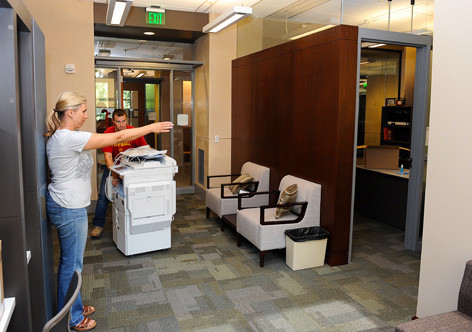 "We have a very talented group of staff members in the admissions office," Caffrey said. "I'm confident our team will continue the tremendous momentum that was established under Marc Harding’s leadership."

Caffrey recently completed his 30th year in ISU’s admissions office, where he began as an admissions counselor in June 1982.  Following several years as a recruiter, Caffrey moved into a position overseeing ISU’s freshman recruitment effort.  For the past 15 years, Caffrey has been responsible for operations and policy in the office of admissions.

Caffrey holds two degrees from Iowa State: a B.S. in psychology and M.S. in counselor education.  He has served as co-chair of the university’s Open Option Task Force and member of ISU’s Athletics Compliance Committee, and has received the Regents Award for Staff Excellence and P&S Council’s CYtation Award.

Advice from a pro on how to keep your keepsakes 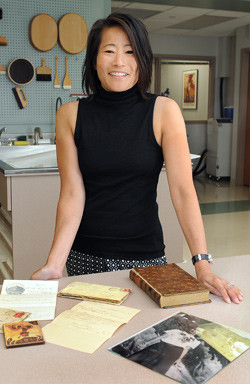 Keepsakes stowed in shoeboxes, plastic bags and old photo albums won't keep all that long, according to Hilary Seo.  She ought to know. As head of preservation for university libraries, Seo oversees the longterm upkeep of books, journals, art and special collections pieces that range from 19th century letter sweaters to bovine watering bowls. Below, Seo tells the rest of us how we can take better care of those old Yellowstone snapshots, grandma's quilt and other family treasures.

Microclimates are good for everything. For household purposes, a microclimate is a box that's sized just right for your treasure. It's small enough so nothing rattles around and big enough not to pinch. That box does a little preservation magic. It buffers the object inside from rapid temperature and humidity fluctuations. Fast fluctuations accelerate aging and deterioration of paper, leather, textiles, all kinds of materials and also cause physical distortion of objects.

If you try to create a microclimate with a shoebox or other ordinary kinds of cardboard, you're setting up a hazardous environment for your treasure. Cardboard boxes are made of wood pulp, and acids in the wood will burn and discolor textiles and paper. To do that microclimate right, you'll need an acid-free and lignin-free box. (Lignin is what causes the day-old newspaper in the driveway to yellow.) You can buy such boxes, custom-sized, online. Google "archival products" or "microclimates."

Photos: Don't do anything you can't undo

Don't laminate, tape, glue, write on or do anything else to a photo that can't be undone. Remove photos from old albums if you can; most aren't acid-free, and some use damaging plastics and adhesives. It's best to store your print photos in polyester sleeves. Make sure the sleeves are polyvinyl chloride-free. PVC will break down the emulsion. Here are a few other photo tips:

A common notion is that cedar makes an ideal container for textiles. Cedar chests are lovely and they smell good. But textiles in direct contact with cedar can be damaged by the acid. The solution is to wrap the textiles in unbleached muslin (available at fabric stores) before putting them in the chest. You also can drape muslin over that wedding dress or other fine clothes on hangers.

Don't leave textiles in dry-cleaning or any other plastic bags. The bags off-gas chemicals that can damage cloth. Polypropylene, polyethylene or polyester plastic containers, mentioned earlier, can be used for textile storage.

Check on your treasures every once in a while to make sure they're not incurring damage from pests, moisture or anything else.

Free consults available at the library

Preservation staff will do free consultations on preserving your treasures. Make an appointment by calling 4-0776 or emailing Seo, hseo@iastate.edu, or conservator Melissa Tedone, tedone@iastate.edu.You also can get some insights into university preservation projects on the library's preservation blog.

If treasures that are very valuable or dear to your heart need repair, consider consulting a conservator, who specializes in objects like yours. The American Institute for Conservation of Historic and Artistic Works website has information on preservation and a guide to conservators, by specialty and region. 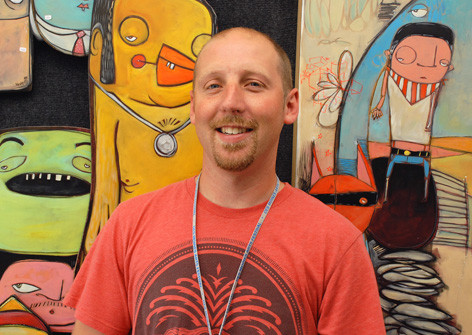 Alumnus Chris Vance is an Iowa Stater whose work will be on display at the Des Moines Arts Festival June 22-24. Submitted photo.

The 15th Des Moines Arts Festival this weekend will include the work of several Iowa State students or recent graduates.

Amateur or "emerging" artists are Iowa residents currently enrolled in or recently graduated from universities, colleges and art schools across the country. There are 22 Emerging Iowa Artists in this year's festival, including six Iowa Staters:

Two other College of Design alumni -- Chris Vance of Bondurant (paintings) and Christian Vandehaar of Altoona (pastel drawings) -- are among the 185 professional artists selected to participate this summer. Vance graduated from Iowa State in 2000 and Vandehaar in 2009.

Both artists were award winners at last year's festival. Vance won a Juror Award in the professional category and Vandehaar won Best of Show in the emerging artists program. 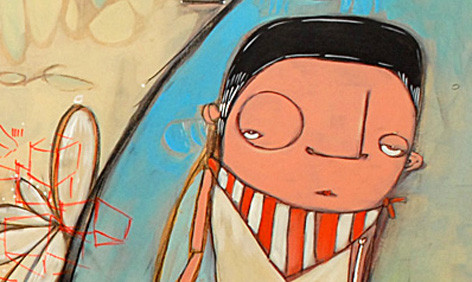 Six current or recent students are in the "emerging artist" program at this weekend's Des Moines Arts Festival.